(GPS: N 34 06.870, W 118 55.100)
It is that time of the year again where the unofficial start of summer beings on Memorial Day Weekend in the U.S. I wanted to show a short popular hike in the Santa Monica Mountains I did a few weeks ago. Admittedly, I’m a High Sierra snob so it is hard for me to get too excited about every hike in the southern part of the state of California. This one did have some good moments in it so let’s get to it…

My brother’s church hiking group wanted to do this one, and I was dragged along. To make it work out right I had to get up at 3:00am, meet up with the group, travel through Mulholland Drive on small roads though the Santa Monica mountains to get to the trailhead. We arrived at the small parking area sometime before 7:30am. There was some confusion here since some other friends we were supposed to meet ended up further on down in the main parking area where the Mishe Mokwa trailhead officially starts. We tried to get to them via cell phone, but the reception was not very good there. I wasn’t really in charge on this hike, nor did I know much about the area, so it wasn’t until later we all realized the simple mistake that had taken place. 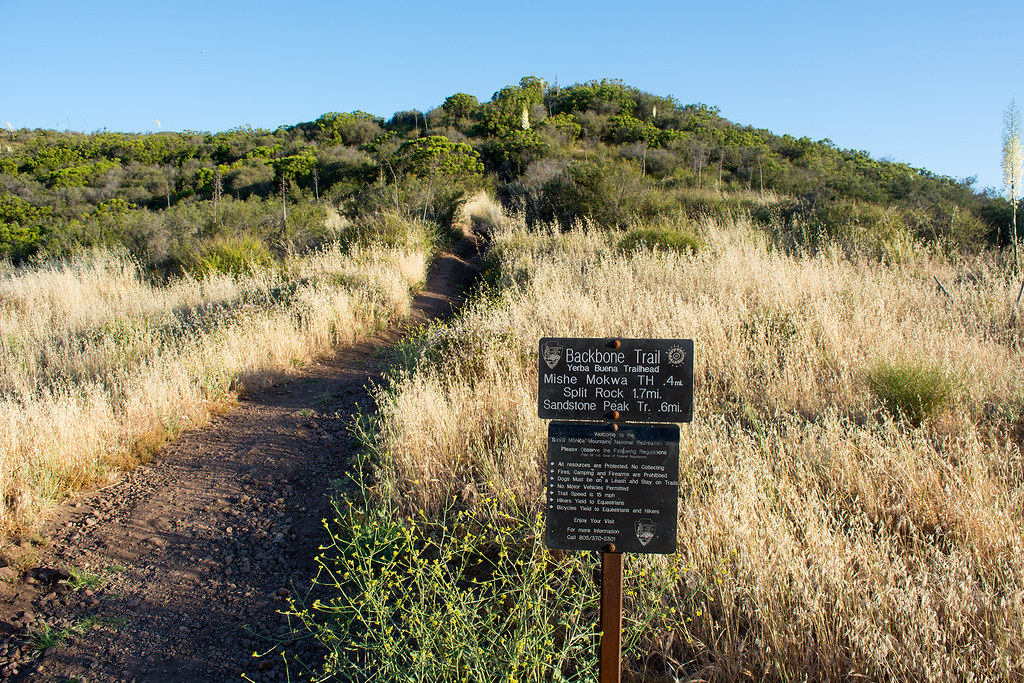 About twenty minutes into the hike we encountered the nice looking canyon that contained the sandstone rock formations that are major scenic point in doing the hike. Unfortunately, any pictures at this time of the morning in this direction would not be as great as later in the day due to the some just coming up over the east. Still it gives you an idea of the area. 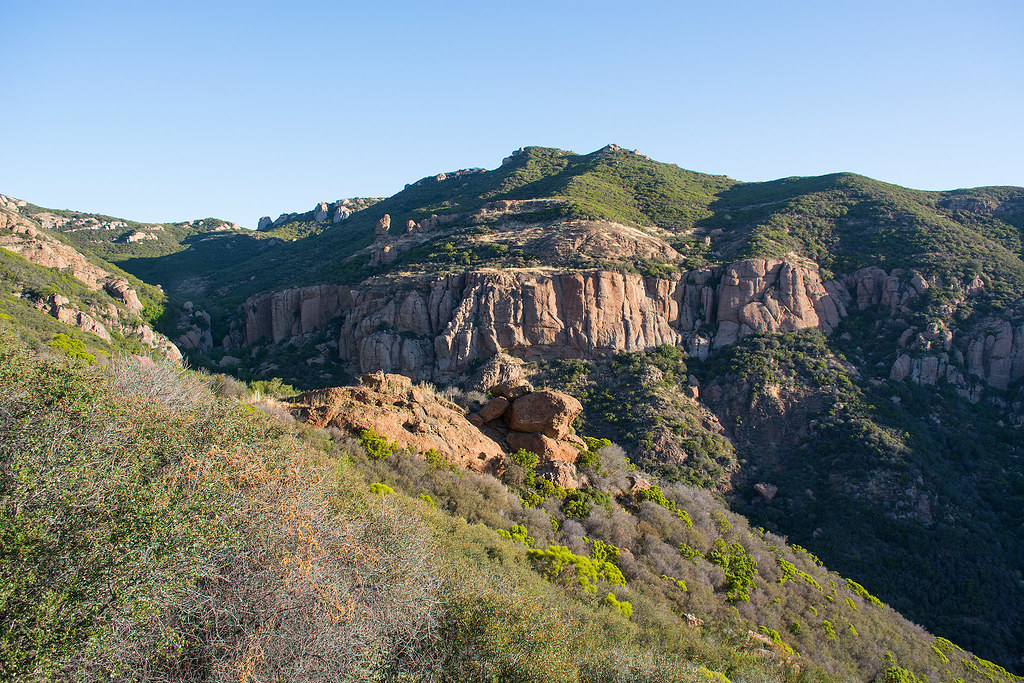 It was not too long after this that the open trail area closed up where trees and plant life were all around us. I had to constantly duck under the branches that would have “beheaded” me had I gone right through them. As we descended we finally came across “Split Rock”: 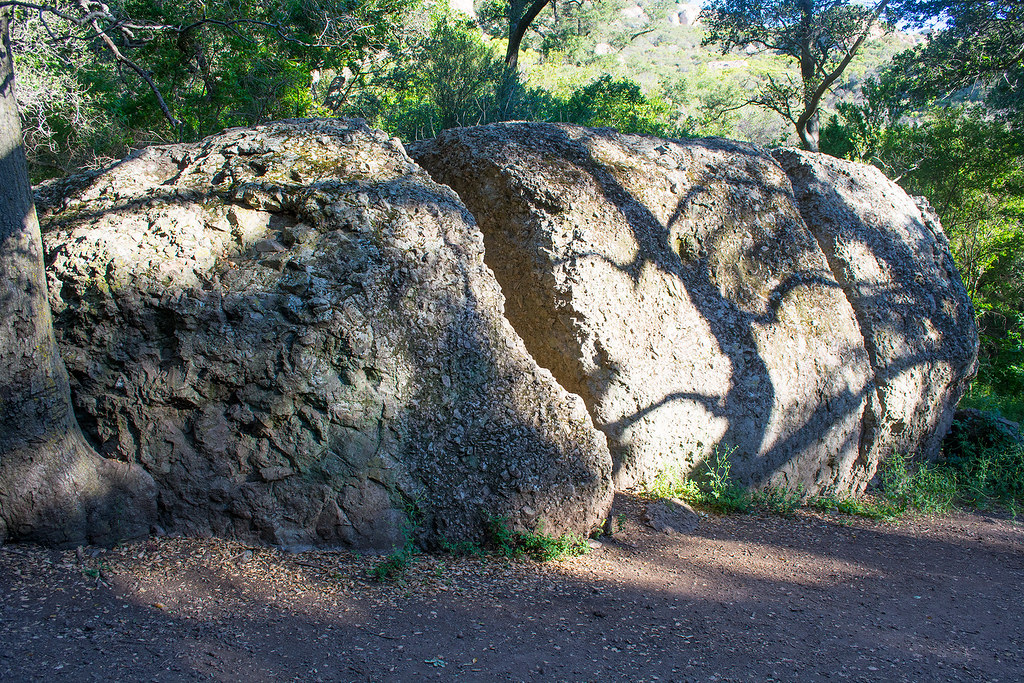 After some jokes about how isolated this part of the trail is and this is where a serial killer would strike…not my joke, but some of the younger ones talked like this…we were off again. We passed many sandstone rock formations along the way which is really the scenic strength of this hike. 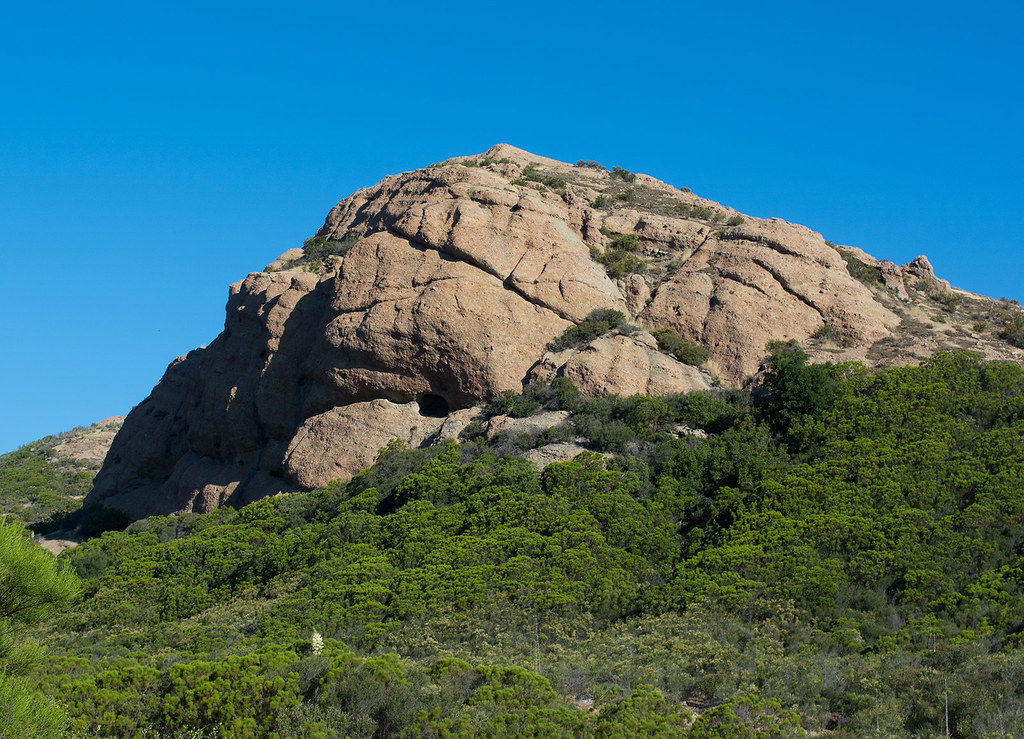 It was while observing this rock formation above that something was triggered in my mind. There was a Kurt Russell horror western movie called Bone Tomahawk that was filmed somewhere in these mountains. I’m not sure exactly where, but I remembered a certain look that film had with sandstone rocks in that movie.
As we went around this loop trail we finally encountered an area that I liked the most. There is a residential area down below and the Pacific Ocean is in the distance: 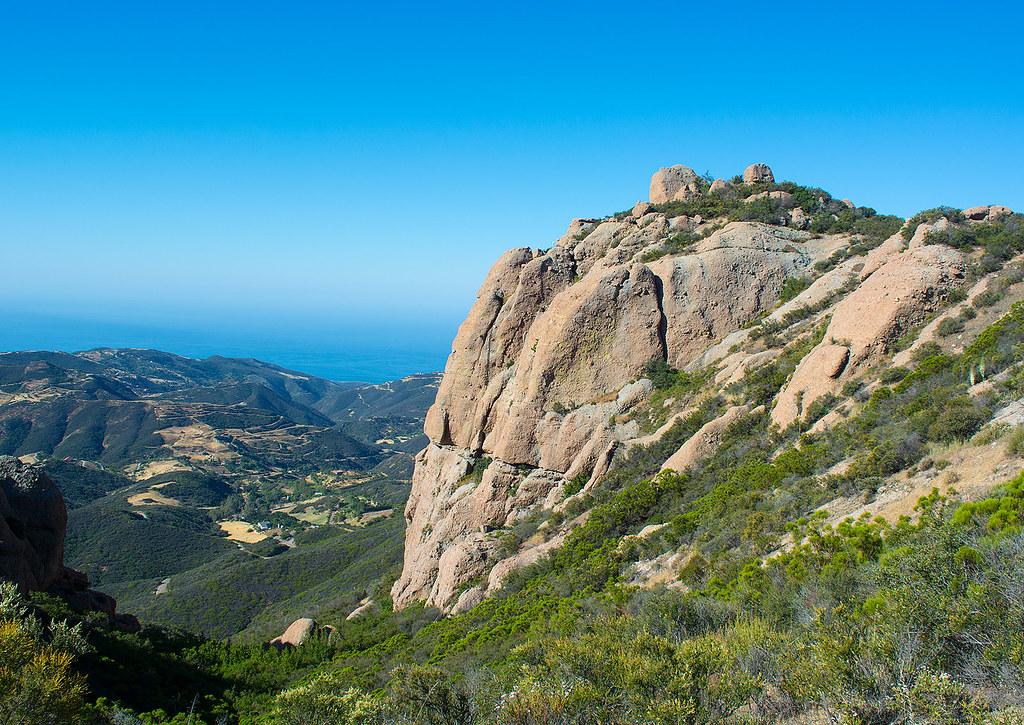 It was a little further beyond we were close to the highest point, Sandstone Peak, but we didn’t ascend that part because there were too many people near the top of that rock formation. We were content with the area we had ascended too; it was a big antenna adjacent to the highest point. On the descent back to the parking we saw a man made lake that I was pretty sure was Lake Sherwood. If I remember correctly an old silent movie was filmed at that lake connected to the Robin Hood story.

The last twenty minutes or so I had a really slow pace due to the amount of people just starting the hike. I was encountering groups of twenty people or more on the trail so I had to move off trail for them. A lot of Koreans like this hike from what I could tell.

As I got back to the now full parking lot, my brother was on the phone with the friends we were supposed to meet up with. We found out they were further on down at the main parking area and trailhead that morning before we got there, but after waiting around for us ended up doing the hike thirty minutes after we had started it. They were describing all the places they had been to that I have described in this blog, but were trailing us so we never saw them. That was the only disappointment we had about this.

Supposedly, there is over a 1,600 foot elevation change in this loop hike, but I never really felt I got any serious uphill in. It there was that type of elevation change then it is rather gradual with lots of ups and downs. Had we gone the other direction on the loop trail I think I would have felt it more. In any case, I don’t consider this hike to be that difficult and can be done in a few hours.

Some of the other pictures I took on this hike can be found in the following Album on my Flickr account:
The Mishe Mokwa Trail
Posted by The Great Silence at 9:30 AM