When I originally came to Convict Lake last year it was in the morning before I went to Hot Creek. The two areas are not that far away from each other. I would say within about a 10-15 minute drive. I did not spend too much time here. It was early that morning and the conditions were less than ideal, but I had the chance to come here so I took it.

How the West Was Won is one of those movies I like parts of it, but not the whole thing. Since it was intended to take advantage of the Cinerama process (note the Wiki link has the same scene seen in the picture below), have an all-star cast, a few directors, a collage of different storylines, and tries to appeal to everyone it just seems to be a bit uneven. Still, it is a movie worth watching.

This is the scene at the very beginning of the movie where Jimmy Stewarts rides up.

It may seem like there was not many people here that morning in the parking lot, but they were around. The camping area is behind me where everyone was either still sleeping or just getting up. 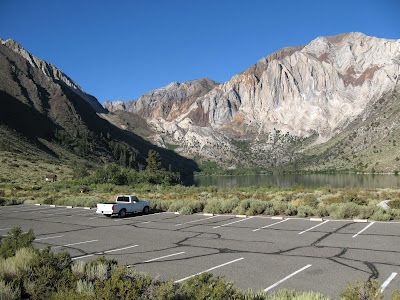 Here Jimmy Stewart is leaving in the canoe.

These areas are close enough for what I was after that morning. 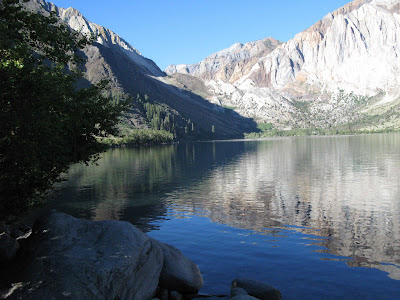 What is really interesting about the Convict Lake area is some of the mountain features, like the ones you see in the background on Laurel Mountain with the gray and brown colored rock, are the some of the oldest rocks in the Sierra Nevada. Some of the surrounding areas go back to Cambrian era rock; we are talking over 400 million years ago. 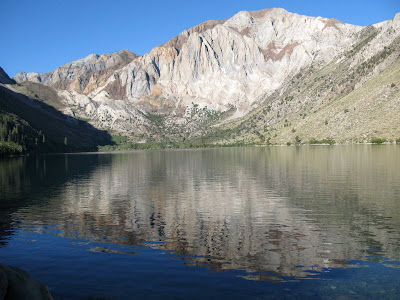 This is the road you take to get to Convict Lake. Mt. Laurel is on the right and Mt. Morrison is on the left. 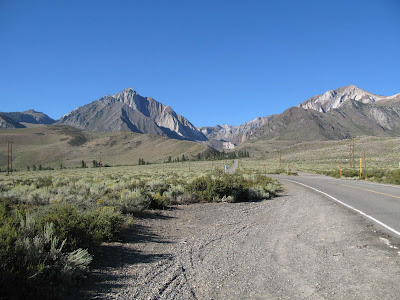 Mt. Morrison is one of the most impressive looking mountains as one drives by on HWY 395. It probably won't be any time soon, but I do hope to climb it someday. 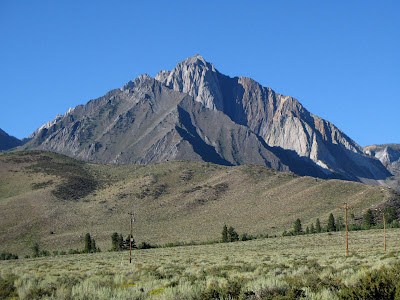 Although I shot some video and intended to do something regarding the old west shootout that took place here, I decided I will wait until I go back. So, why the lake is called "Convict Lake" will have to wait.

As a side note, way before my time, my grandparents knew the people that owned the resort at Convict Lake. There was some thought that they may purchase the property at the time, but they decided against it. If that would have happened I think my life would have been way different than it is. They also decided against getting the historic house in Bridgeport that was used in Out of the Past. My grandmother was the one that wanted that one.
Posted by The Great Silence at 8:37 PM