Two Harbors: The Sinking of the S.N. Castle (Catalina)

This is what I was here to see. The area used to portray the Battle of Tripoli Harbor in a 1926 silent film called Old Ironsides. In that movie, the ship used to portray the U.S.S. Constitution comes around the corner. Where I was standing at Catalina Harbor Overlook was supposed to be the port of Tripoli. I zoomed in a little for this picture: 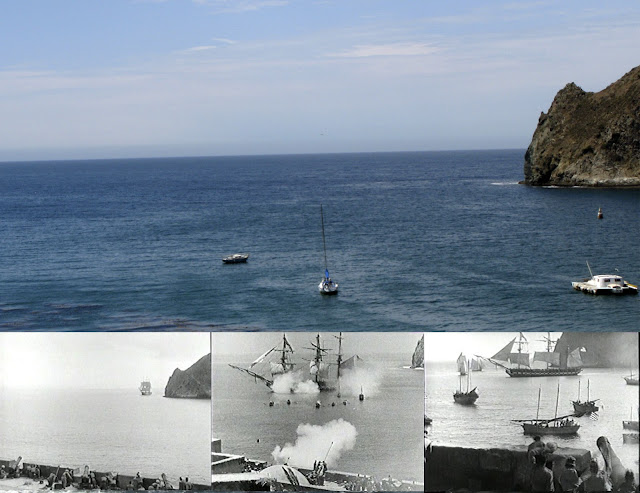 The thing that is great about this is the U.S.S. Constitution sinks a pirate ship that in the real world was called the S.N. Castle. It was built in 1886, and you can read more about it in the link I will provide below. What they did was set it on fire, and you see it sink below the water in the movie. The remains are still out there, and if you know how to scuba dive you can see them. My picture was where it was sunk which is probably just beyond those two boats in the middle, and the movie picture is the ship as it starts to take some major damage. 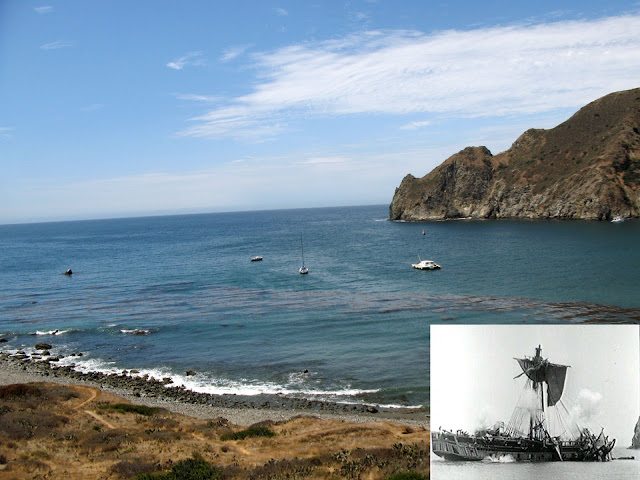 I’m going to let this blog wrap up this part of my day at Two Harbors. I did go on to walk to the other side of Catalina Harbor and then went on to hike the area I mentioned in the first blog. At some point I will probably show something from that and eventually my time last year at Avalon on a different day which was a lot of fun too.

After looking back at the Ningpo gravesite I turned around at Catalina Harbor Overlook. This is a popular spot for people to walk to, so I ended up having to wait a while for people to come and go before I could really do what I wanted to do. 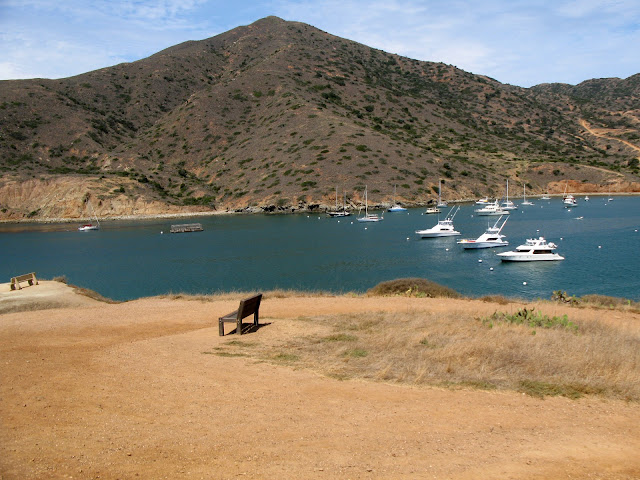 You can see some of the benches they have here so one can look further into the ocean of the pacific…next stop Hawaii! Not really, San Clemente Island (and San Nicholas Island if you move to the right spots) can be seen from this side of Catalina. John Ford was here filming a movie called The Hurricane. In the scene that took place near here Jon Hall was being used as a slave while John Carradine was the warden. You can see the rocky hillside across the harbor. 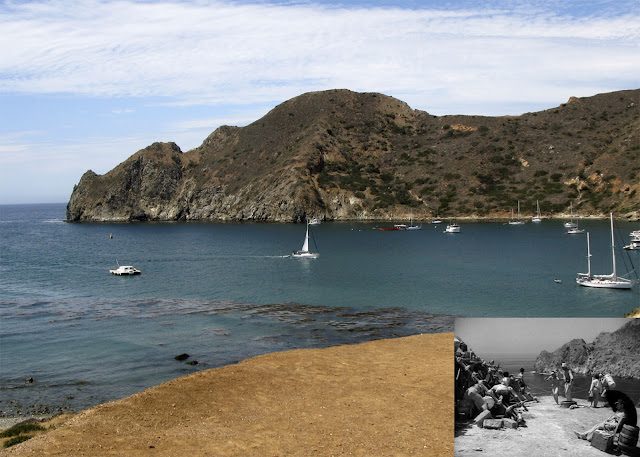 Now I have to admit I don’t think I really got all of this right. I knew I was in the right area of course, doing a lot of this from memory, and I wanted to get this done quick since I was on a schedule. In the movie, it looks like they were actually a lot higher. I’m sure, knowing what I know now, that I could do a lot better in figuring this one out a second time around, but to be honest…I don’t care. Just look at this one as giving you an idea of the terrain they were using for this scene. 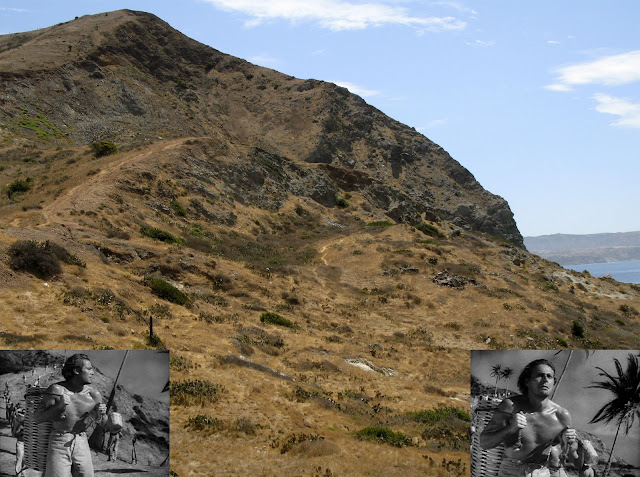 You can see the path up the hill under the main mountainside. On the right you can see the craggy mountainside as John Hall escapes by jumping down below. The field in the middle of the picture and below is where he tumbles. They then show him jumping from a rock into the water, and that looks like it was done somewhere else on the island, but it could have been done nearby. 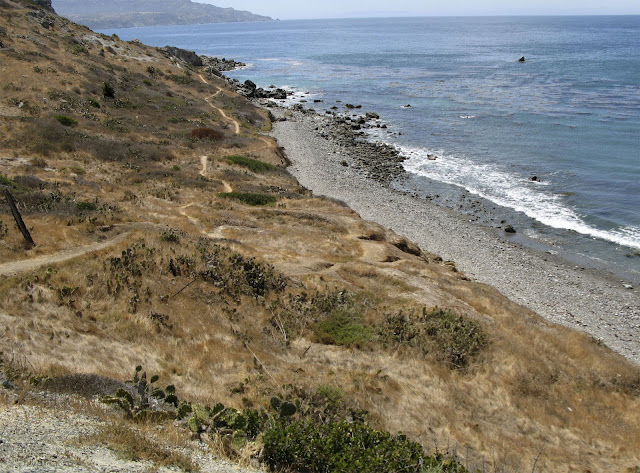 Okay, truth be told, no disrespect for John Ford or those who love The Hurricane, but I was here for something else that I thought was way cooler.

(GPS: N33° 25.850 W118° 30.235)
Moving along I discovered the small barracks that was used by the Union during the Civil War. It is now the home of a yacht club. There is also a small public school here for the kids that live here that is connected with the Long Beach School District. I started to get closer to Catalina Harbor. 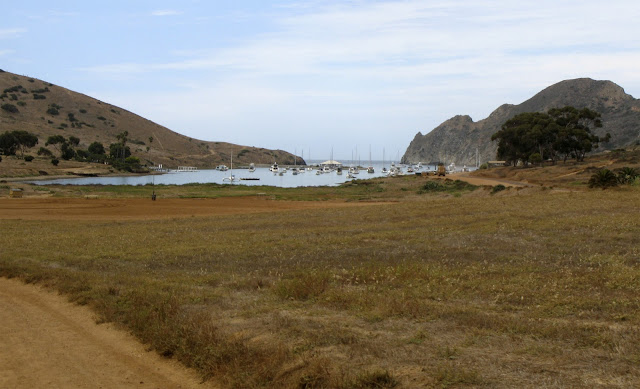 ﻿The interesting thing I discovered about this harbor is that not only were movies filmed here, but it is a graveyard for old ships. There are a bunch of them that have remains down below in the harbor. 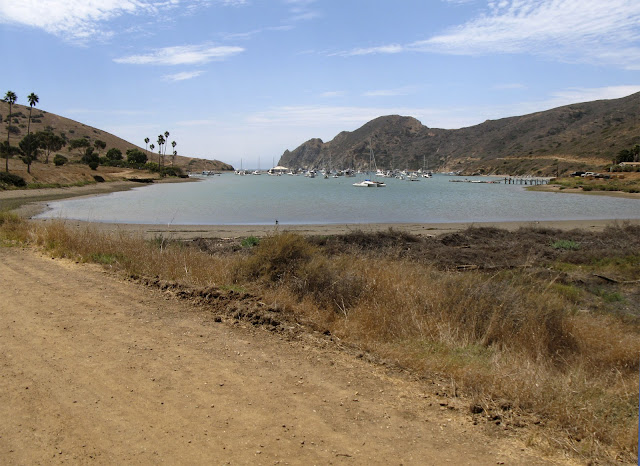 Obviously, there are a lot of modern boats in this area as well. This following picture and then the next one that pans to the left was my first real stop of the day. 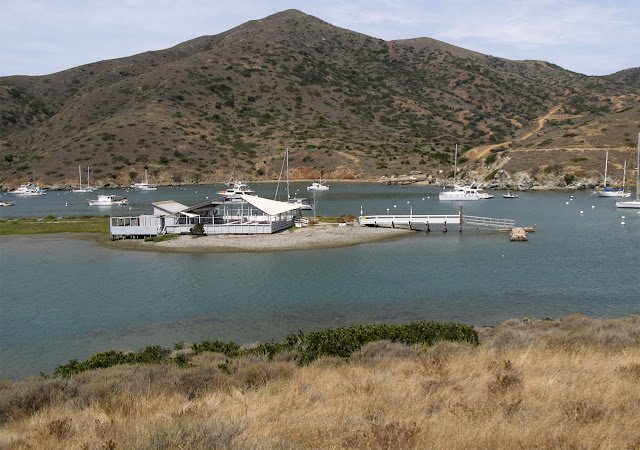 This is the where the Chinese pirate ship, the Ningpo, had its final resting place. Built in 1753 this boat was used for piracy, smuggling, slavery, battles, etc. It had quite a history doing these things in the waters near China. Eventually, it was captured and sold to Americans in 1911. It was displayed in various piers off of California, and then ended up here. It was used in a few movies here and visited as a tourist attraction, but in 1938 it caught on fire which might have been part of its use in a movie. That pretty much destroyed it for good, it’s remains were scavenged, and if there is anything left it's down below. 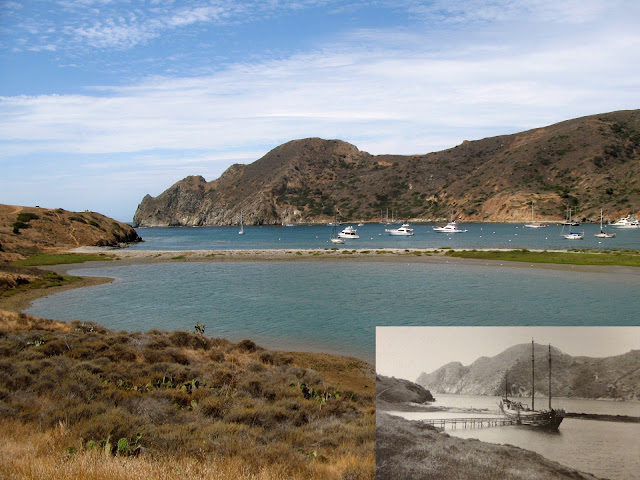 I went up a higher and looked back at this spot. 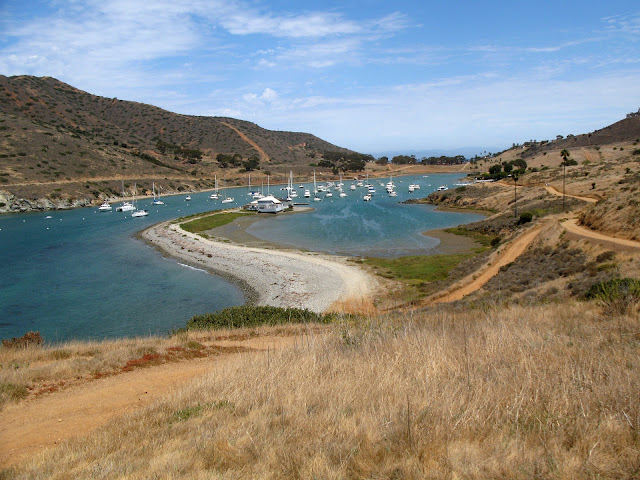 On the following website you can read all about the Ningpo, see some other pictures and art, including a postcard-like art picture that show the perspective from where I was at:

There are a bunch of other links out there about this ship. Do a search for “Ningpo” and “Catalina” and you should be able to find a bunch of articles about it.

When I was a kid I visited Catalina Island once with a school group and had never been back. I’ve seen it many times while hiking or when near the beach since it is only about 23 miles from the coast. It was around two years ago I took advantage of a free boat ride that takes place on one’s birthday to the island. I had a choice to make of two places on the island to end up at. I naturally took the one that was going take a little more work to do. I knew it would still be fun, but not like just sitting on the beach the whole day.
Most people think of the town of Avalon as the place to go when visiting Catalina. It is the obvious tourist place to go and that’s where I went as a kid. This time I wanted to visit the smaller Two Harbors. The disadvantage of going there is it lacks the touristy shops and comforts of Avalon, but the advantage of Two Harbors was that more movies had been filmed there and I knew I could get some quick hiking in during the few hours I would be there.
As it was I think I only spent less than six hours on the island that day. As soon as I got off the boat that morning I spent most of my time walking. So, I think it was around four and half hours of continuous walking and about an hour of me just hanging out at the pier waiting for the boat to pick me up.
In the next four blogs I’m going to cover some of what I did during those few hours. What I did prior to going there is a quick search on Google maps, read about Two Harbors in Harry Medved’s Hollywood Escapes, and I checked out a website that I will link later in the blogs. I did watch a few movies I had to prepare me for what I was after. However, I didn’t do as much research I normally might for this Catalina trip or these blogs for that matter. So, there is a lot about Catalina’s geography and history that I really do not know about.
Here is a picture of the pier. I took this at the end of the day when I was just sitting at a bench enjoying the moment before I would leave. In the background and higher up is the road I took later in the day to do some hiking. 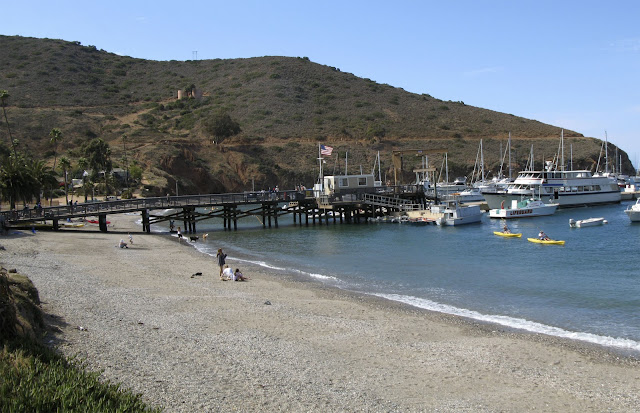 Again, this is right before I left, but in the morning I took off, headed past a few small rental places, small homes, the only café, and the small general store. Believe me, there really is the bare minimum of civilization here. Just enough to keep one alive and that’s it. For my purposes it was the way I wanted it for that day. The first destination was on the other side of the island that can be reached within a ten minute walk. 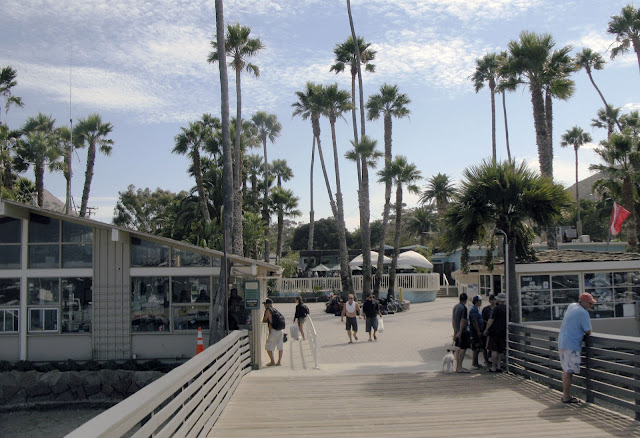 There were a few movies filmed at the pier here. One I had seen was Kansas City Confidential. In the second half of that movie Isthmus Cove plays the small Mexican (Central American? South American?; I can’t remember off the top of my head) fishing port in that movie. Most of the scenes take place on sets indoors, but there are a few passing shots that were filmed here. The climatic scene is actually set on the pier. The car drives up with the actual café in the background. The entrance to the general store is on the far right where the man is standing and my picture ends. 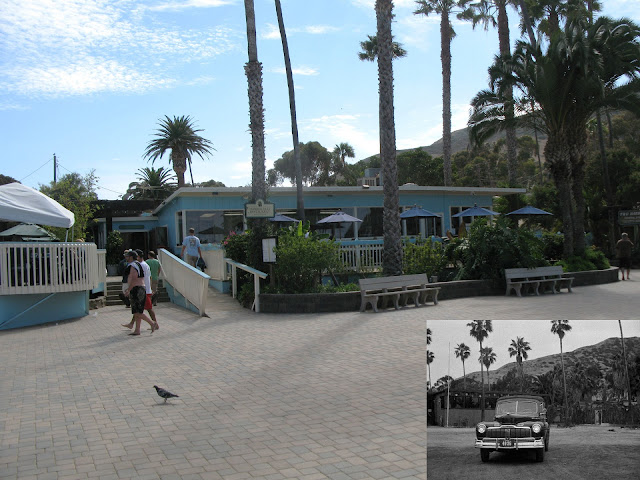 The first destination was Catalina Harbor which is the other harbor of the Two Harbors. So, within a minute or two I passed the last of the homes and headed there. 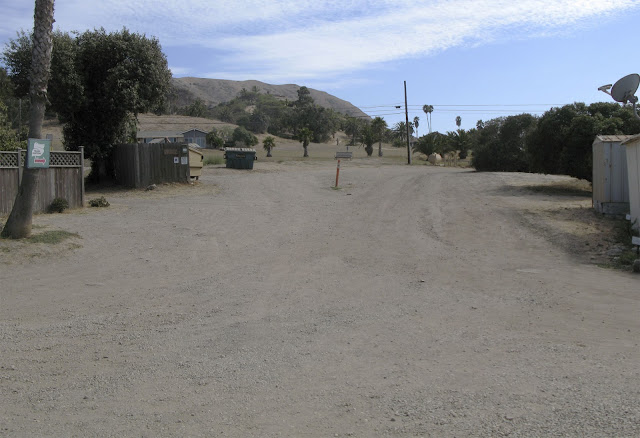