Watch Out For Snipers! (The Alabama Hills Series)

(GPS: N36 36.200, W118 06.905)
Here is an interesting shot. This is taken from the 1935 movie The Lives of a Bengal Lancer with Gary Cooper. It takes place at the beginning of the movie where Gary Cooper and his troops are trying to round the bend that Dave Holland referred to as Bengal Curve. The sniper is about to start shooting at them. 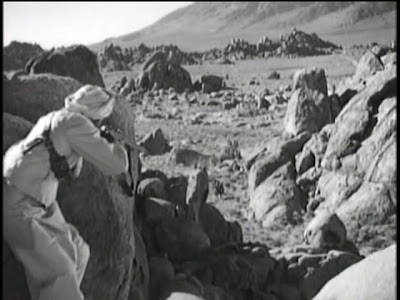 The shot below is pretty close to the spot: 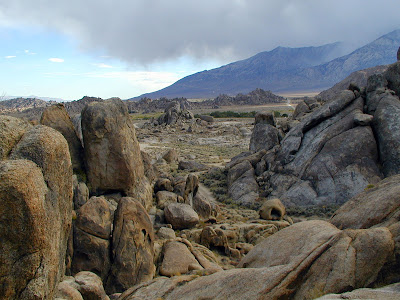 To get to this point the dirt trail runs out right at the end so there isn't much room to move here. It looks like our sniper is leaning on the rocks to the left.

In the following picture it shows you what it is like from below. Most of the area they are coming from including the rock formation you see in the left side upper middle part of the picture is used in the movie Yellow Sky with Gregory Peck. 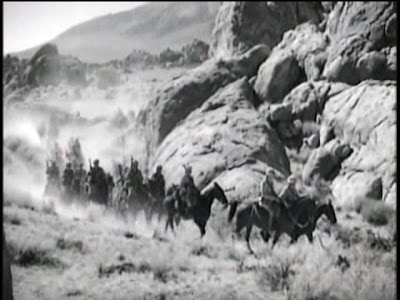 The movie also has a seen at Gary Cooper Rock although Gary Cooper never appears at the rock in the movie. There was a promo picture of him standing under it. Check out my blog on that found here.
Posted by The Great Silence at 11:47 AM

The Lone Pine, CA Christmas Special
Sometime earlier this year I found out that there would be another movie filmed in the Alabama Hills area called Winter White. I was all excited a modern Christmas western would be filmed there that would be on the Hallmark Channel. Okay, then I found out it would take place in modern time. Okay, I can live with that. Then a little later I saw the title was changed to What I Did For Love.

Bad thoughts started to go through my head about how bad this could be. I have over 50 dvd movies I have collected partly because of the area. Most are westerns, some are British Empire epics in India, a film noir that is supposed to be in Baja Mexico, but all take place at the Alabama Hills with great action in all that scenery. Now I had bad thoughts about adding a love story to the collection. Well, it really was not that bad, but it did make me nervous.

Basically, the story is our "hero"...err...I mean, our potential husband of a girl from a small town needs to visit her family and get the blessing for the marriage. Our guy is a lawyer from the big city and not used to the ways of small town folk. Unfortunately, the rural clash is a little too much for him at the beginning. The father of the daughter does not take kindly too him. Through various trials and a climatic scene in Alabama Hills our guy wins the hearts of everyone and get the blessing. 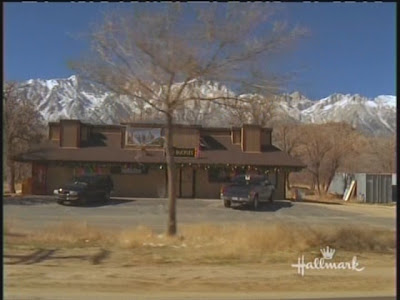 The shot above and below is the old Indian tribal building on the south side of town. It is used as the local nightclub "Buckles". 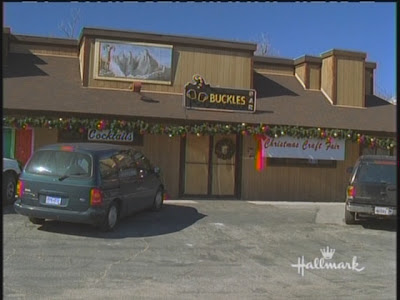 At the beginning of the movie they show a lot of the town of Lone Pine (AKA Pine Gap in the movie). The shot below is from the park. Whenever I take my trip north to the Eastern Sierra the park represents the half-way point and is the local restroom stop. 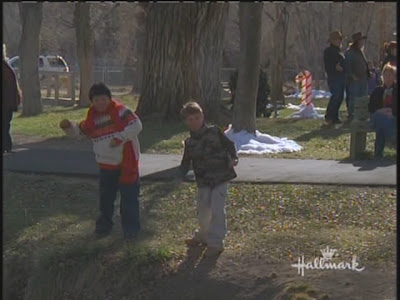 Most of the movie uses the ranch areas for the shots of the mountains. They are good shots using the best technology so the snow, clouds, and peaks look really nice. They eventually head up the road near Whitney Portal for a deer hunt. They don't show much looking back down, but if you watch closely you can tell they have gone up some elevation. The climatic scenes near the end of the movie take place at the Alabama Hills so let me show some of what they did. 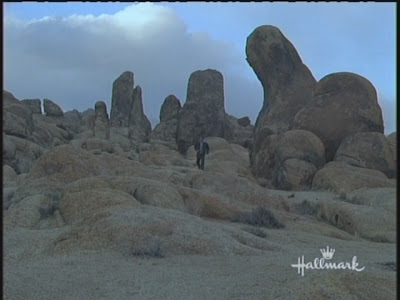 Token shot. Everyone does this: http://the-great-silence.blogspot.com/2006/09/alabama-hills-series_23.html
The following is the part of the movie I got a good laugh out of. There is a trick that I know goes back to 1946. The people who filmed it must have known about this area's history. Our guy is looking for a cave for shelter. Here he is with Lone Pine Peak in the background: 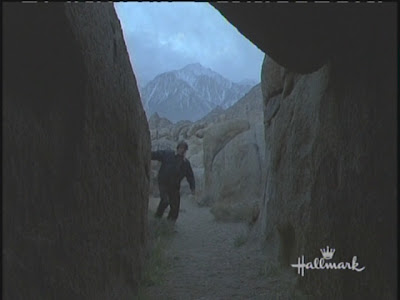 This exact same shot was taken in 1946 in a Hopalong Cassidy movie, Devil's Playground. In that movie it was the secret location of some gold. It had always bothered me where this location was. I never saw a cave like that there in my searches. Well, there was a good reason for it. Here is what the cave he entered actually looked like: 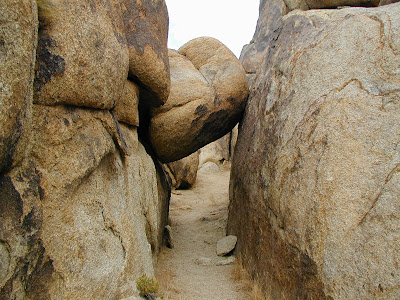 Surprise. It is not really a cave after all. The trick in these movies is they draped the backside so it would look really dark. The viewer would get the impression that it is a big dark cave since the backside of it can not be seen.

Check out my blog for the Devil's Playground with video.

The movie was a good Hallmark Channel family movie. Kind of silly, but it was alright. I am just glad they did not make a mockery of my home away from home. Let me just say that I am so glad Randolph Scott or Hopalong Cassidy ever made a movie like this. You should watch if only to see the scenery of the area in this 2006 movie.

Search the official site link http://www.hallmarkchannel.com/ for any replays.
Posted by The Great Silence at 7:22 PM

Email ThisBlogThis!Share to TwitterShare to FacebookShare to Pinterest
Labels: Alabama Hills What I Did For Love
Newer Posts Older Posts Home
Subscribe to: Posts (Atom)