Looking back on the Summer of 2018

Dusting off some cobwebs...we are now officially in the fall here in the north.

Well, it has been a while. This is one of those years that my productivity on the blog has been almost down to nothing. As I warned years ago, this would be the way things are. Sometimes I will have a bunch of new things to talk about, but if I don't I just remain silent.

With that said, I did get some things done this summer that I might start talking about soon or at the very worst at the beginning of 2019. I have some life stressors that have to be dealt with first. I could throw up a bunch of stuff right now, but I wouldn't be as motivated to talk about or enjoy it. I found that it is best to wait and be patient.

In any case, let me tell you what happened over the past six months as sort of a sneak peak. Originally, I planned a few mountain hikes with my brother. He decided he wanted to take his vacation time at the beginning of August. I said, "Okay, but as usual, we run the risk of fires in Yosemite which ruins everything." Time went on.

Sure enough as we got close to vacation time fires started to light up the Eastern Sierra. Once you know the fires are going climbing mountains seems like a waste of time. Smoke everywhere makes the views bad. We had been through this before. I've talked it about so much one year on the blog I felt bad how negative I was. You look forward to something for so long only to have it ruined. "There is always next year."

We made best of the situation and did some other hikes instead. Interesting enough I was rather happy that at some of the most important points of those hikes the smoke was not too bad. Here is an example of Emerald Lake in Mammoth which was on the way back to the car: 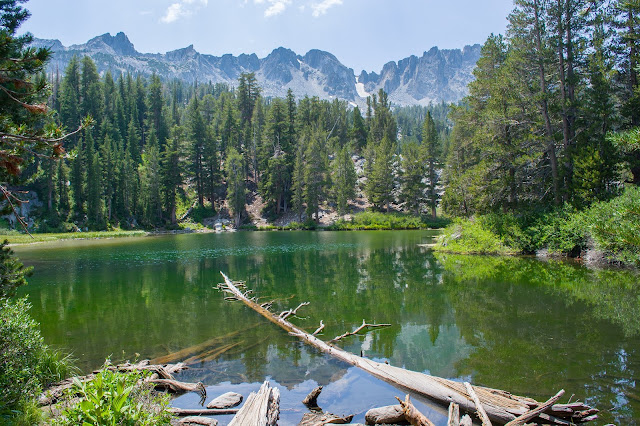 Not bad. Of course, by the time we got home the fire was finally put out. Oh well. "There is always next year." The cycle continues.

I did do a lot of work at one of the movie locations I visited last October. I think I might need to go visit it one more time though for a better introduction and a pickup shot or two. It is one I think most people that like what I do will enjoy. Yes, it has been forever on this one, but this is the most progress I have made on it.

There are other things I am pursuing. One thing I hope to have is some new technology for a different perspective on some of the locations I have visited.

So I am still alive. New content will be coming at some point. I hope you all have been doing well or hanging in there the past year.

See you later on down the hiking trail of life...
Posted by The Great Silence at 8:01 PM