Yellow Sky: The Mine (The Alabama Hills Series)

The mine in Yellow Star: 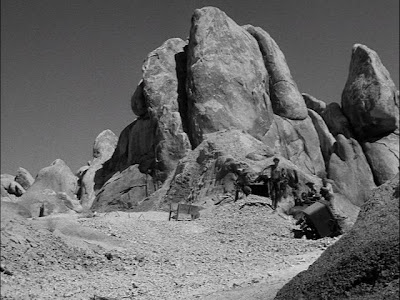 Again, everything I have shown in the past few blogs is relatively close to each other. This is the furthest out from where the house and barn were in the movie, but no more than a five minute walk. All the Alabama Hills scenes were in the same area. Most movies that were filmed here go off to different areas for their scenes. 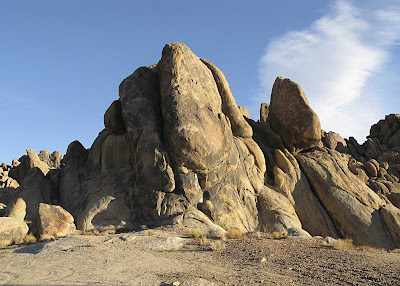 As you can see, there really wasn't a mine there after all. Most of the time a company would put in fake mine entrance like that. The thing to point out in the above picture, and maybe makes more sense by watching the video I did, is some of the tailings they used in the movie are still there from Yellow Star. That is what you see on the ground to the right. 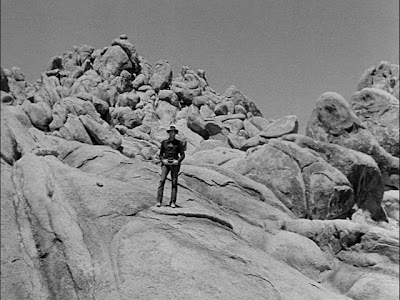 The movie picture of Gregory Peck confronting Richard Widmark and the rest of his old gang is taken just off the right side of the mine. I had thought I had a more recent picture of this, but I could not find it. The most recent time I was here I just shot the video and did not take pictures. So, I had to find a lower quality one from an older camera I did some years back. This should do to show you what it looks like these days. 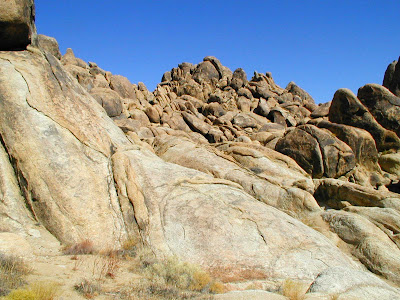 One thing I have not mentioned in this blog entry that you might be wondering about is the arrastra used in the movie. I have covered that before in an older blog that I will link below. It is hard to believe it has been three years since I did that. The video covers both the mine and the arrastra.

So, if you have not seen the movie Yellow Sky, then I hope you do. The cinematography here was really well done. Budd Boetticher once said you just can't get a bad shot filming at the Alabama Hills. That's why it was such a popular movie destination back then. Somewhere on one of those imdb message boards I read sometime back was a criticism that made me role my eyes. It was that although the movie was really good in every area it was too bad it was filmed in black and white. Have no fear since some people quickly responded and ripped him for saying that. While it might have worked in color too, the black and white really gives it a film noir western look to it. There is a certain beauty and advantages to filming in black and white.

Finally, if you are ever at the Lone Pine Film Festival, then the Yellow Sky tour is one of the basic tours you can do. The guy who does it is really good and knowledgeable about the film and the locations.

Posted by The Great Silence at 8:47 PM

(GPS: N36 36.005 W118 06.765)
From where the house and barn were in Yellow Sky, one just moves along to the north to get to the waterhole used in the movie. The distance away is exactly like what you see in the movie. 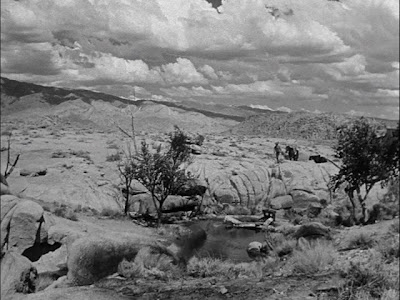 As you can see, this really is not a waterhole at all, but it is what they used. 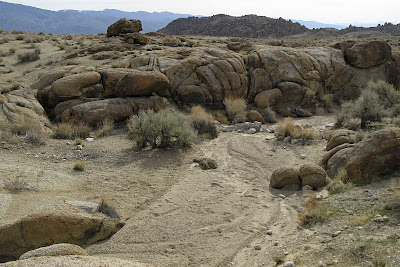 You can see the rock Anne Baxter is heading to. 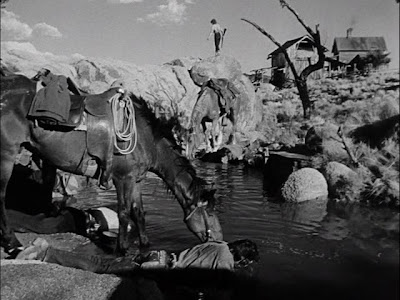 In this picture you should be able to pick it out. What I am calling the "trail" to the waterhole is on the right. 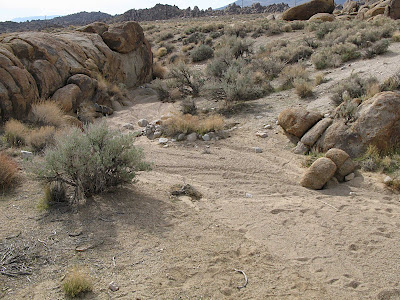 This is the scene where one of the outlaws grabs Anne, but then the younger outlaw tries to stop him. 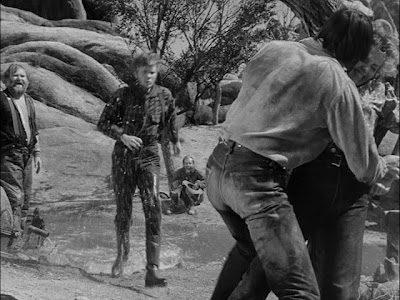 This is close. The rocks to the left are the guides to this. 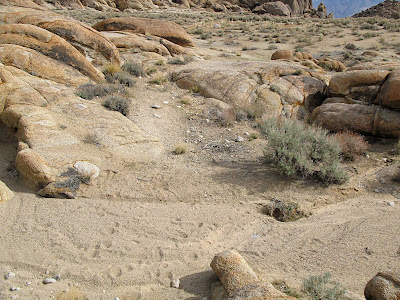 Gregory Peck comes and gives the outlaw a nice kick. Notice Richard Widmark standing behind the tree. BTW, all the trees you see appear to be just set pieces. Just like water was added to create this waterhole for the movie. 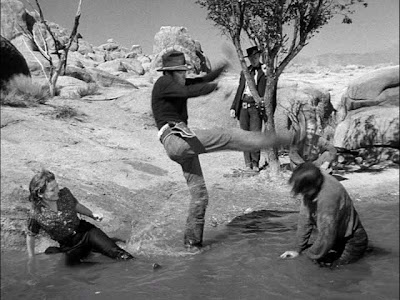 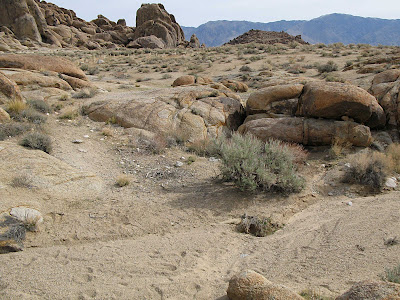 This should give you an idea how the waterhole area was used in the movie.

Posted by The Great Silence at 5:22 PM

Yellow Sky: The House and Barn (The Alabama Hills Series)

(GPS: N36 35.960 W118 06.730)
Here is one I have put off for quite some time. Each time I visit I feel I can do better. Even now, with what I have, I still feel I can do better, but I am tired of waiting around on this one so here we go.
Along with the Boetticher movies filmed at the Alabama Hills, Yellow Sky (1948) is one of my favorite westerns. They made good use out of the area here. While they filmed some of the beginning of the movie in Death Valley, the rest of it was filmed in this particular area of the Alabama Hills.
Although nothing remains of the set pieces of the house and barn they used in the movie, where they were is easy to find there. 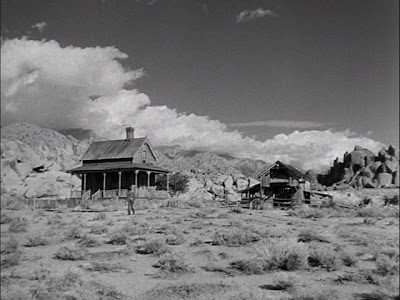 My picture from a distance. Although at first glance it may seem complicated, the rocks are easy to pick out. You can click the pictures to make them bigger and check. 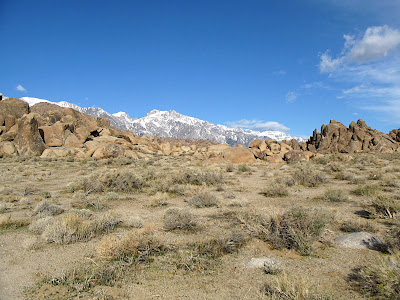 The scene where Gregory Peck's comes to the house and Anne Baxter confronts him. 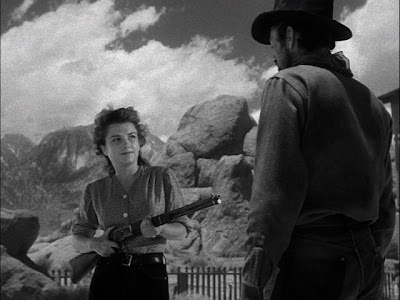 In the video I did not get it as precise as I normally might. Even here I would want to move a few more feet to the left. In any case, the conversation would have been close to here. The house would have been just to my right. 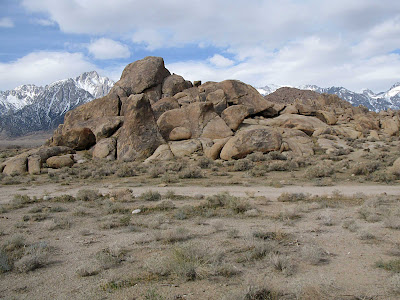 Later on in the movie, Peck uses a "white flag" in order to talk to Anne Baxter and her grandfather who are hidden in "sniper position" above in the rocks. Again, here you can see where the house and barn would have been. 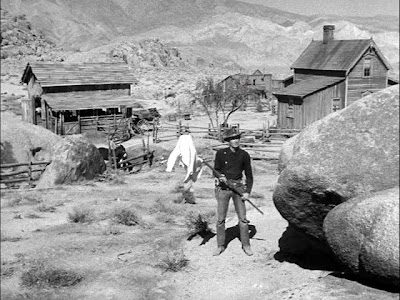 This is where that would have been. 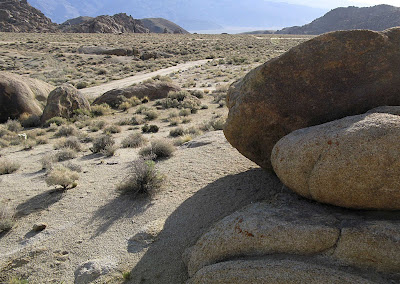 In the movie it really does look like Anne Baxter and grandfather are really high up in those rocks. After all they had to yell out to each other, and you hear the echo when they speak. 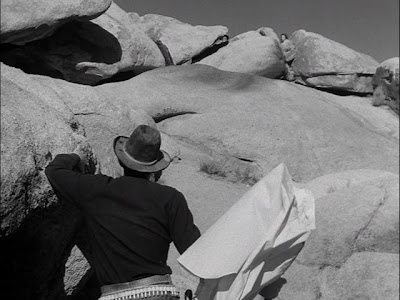 Not really. I would say it was just over 20 feet or so. A nice optical illusion they used. 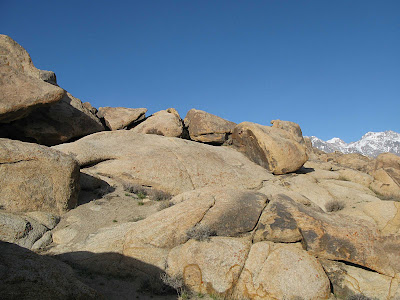 My video for this one:

Posted by The Great Silence at 5:23 PM

(N37° 37.830 W119° 01.955)
This is one that I had some curiosity about, but was never too serious about doing. Driving by on the 395 by Mammoth and seeing the mountain is not too impressive compared to the other ones around. It was a low priority on my list of things I wanted to do. This time we had some relatives with us so we decided to do it.
Looking toward the west, one can see the jagged Minarets to the left, Mt. Ritter, and Mt. Banner to the right. 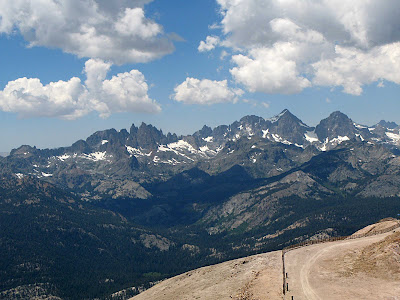 Pulling back a little on this one you can see the clouds made things a little more powerful than it would have been. For that I was grateful. 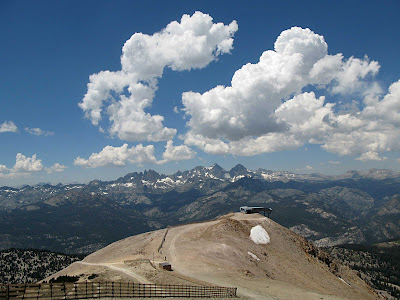 This is looking more toward the south. While it may not seem that impressive, it was interesting to look down this way. The reason being a year earlier I was looking up to here from down there. Somewhere down there is Rainbow Falls and the trail we took after visiting Devils Postpile. 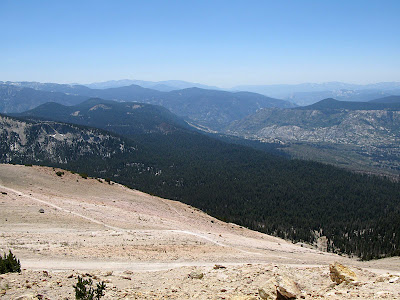 This is looking more to the south east. There are lots of cool things one might see in these clouds, but as Charlie Brown might say, "Well...I was going to say I saw a duckie and a horsie, but I changed my mind." 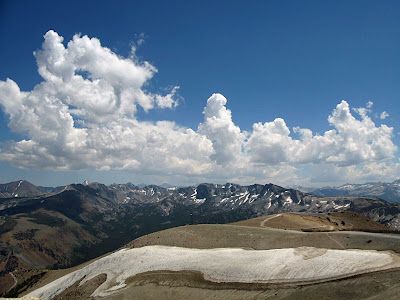 This is looking toward the east. 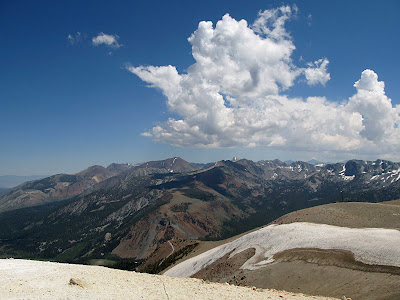 This looking more to the east. You can see the Mammoth Gondola in action here. 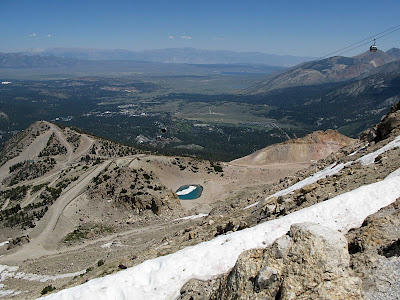 Finally, looking toward the north. You might barely be able to see Mono Lake in the background which we went to afterwords as I mentioned in February. 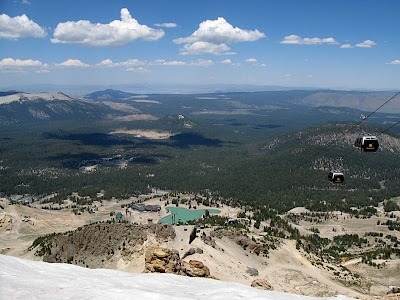 In any case, this was not really much of a hike. We walked from the parking lot to purchase tickets for the gondola. Then in about eight minutes or so we were at the summit. There is a little extra climbing to get to the official summit.

The views are good and if you are not much of a hiker, then you might want to take the gondola to the top. You can also order a sandwich at the top and eat it up there too. It was a touristy one time thing for me that I probably will not do again.

I did put together a video on this one. Originally, I was going to split it up, but decided to include the gondola ride and the views from the summit in the same video. So, it is a little longer than I normally would do. Since this is not one I took too seriously I threw on some of the latest incompetech.com music which Kevin Macleod considers influenced by the 1990's "corporate music plague."

While I do not consider it a complete throwaway video because there are some interesting parts to it, but of all the days of the year to put this up I guess April 1st fits the most:

Posted by The Great Silence at 3:44 PM