For today, I wanted to put this video of my drive up Tioga Pass during the summer. Tioga Pass leads one into the eastern side of Yosemite. One must drive up about 3,000 ft. to get to the elelvation of a little less than 10,000. I have memories of my dad driving me up and down this road as a kid. Sometimes it would scare me looking off the side of the road and seeing this big drop off below. I was always worried about the car having a problem and going off the side.

While driving up the pass by itself is usually fun on a sunny day, the conditions on the day I did this were rather "heavenly." I was not sure what I wanted to call this video...the road to heaven...the presence of God...entering the clouds...Tioga Pass. In any case, I sped up the video a bit so everyone looks like they are driving a little faster than people normally do.

Some other time I will talk more about Tioga Pass, but I think you will like this video:

And while I am thinking about it, being Christmas and all, if you are in the mood you can relive last years Christmas series HERE.
Posted by The Great Silence at 7:57 AM

A few thoughts on "I Heard the Bells on Christmas Day"

A few weeks ago I was in church singing this song. Although I am sure a lot of people out there know the story behind it, but I thought it would be appropriate to show the poem the carol is based on and mention a bit of the background to it:

I heard the bells on Christmas Day
Their old, familiar carols play,
And wild and sweet
The words repeat
Of peace on earth, good-will to men!

And thought how, as the day had come,
The belfries of all Christendom
Had rolled along
The unbroken song
Of peace on earth, good-will to men!

Till ringing, singing on its way,
The world revolved from night to day,
A voice, a chime,
A chant sublime
Of peace on earth, good-will to men!

Then from each black, accursed mouth
The cannon thundered in the South,
And with the sound
The carols drowned
Of peace on earth, good-will to men!

It was as if an earthquake rent
The hearth-stones of a continent,
And made forlorn
The households born
Of peace on earth, good-will to men!

Then pealed the bells more loud and deep:
"God is not dead, nor doth He sleep;
The Wrong shall fail,
The Right prevail,
With peace on earth, good-will to men."

Henry Wadsworth Longfellow (1807-1882) penned this poem on December 25th, 1864. He had experienced tragedy with his first wife dying after a miscarriage, then his second wife died a few years before this poem was written after her dress caught on fire, finally, his son Charles had some close runs with death during the America Civil War. He had been shot once in the back near his spine, but fortunately not close enough for him to be paralyzed.

While the Christmas season can be a happy one it can be quite painful for many. Be it the wars in the world, economic times, sad memories of the past during the holiday season, loneliness, or the realization that todays expensive gifts are tomorrows junk at garage sales to name a few that cause one to question what the season is all about. While I am not sure the "peace on earth and good will" slogan commonly heard is what the passage in Luke 2:14 is really saying, I think Longfellow's rediscovering of the hope and meaning of Christmas at the end of the poem is right on.

ERO CRAS
Posted by The Great Silence at 9:38 AM

Email ThisBlogThis!Share to TwitterShare to FacebookShare to Pinterest
Labels: I Heard the Bells on Christmas Day

(GPS: N37 33.865 W118 47.180)
Earthquake Tumble Rock (Youtube Version)
Earthquake Tumble Rock (Vimeo Version)
This was a quick side trip I had wanted to do after reading about it Susan Hough's Finding Fault in California. It is near Lake Crowley. I just took the McGee Creek Road off HWY 395 and, after about 5-10 minutes going on a narrow road, came here. In the middle of the following picture you should see what looks like a trail that heads straight up: 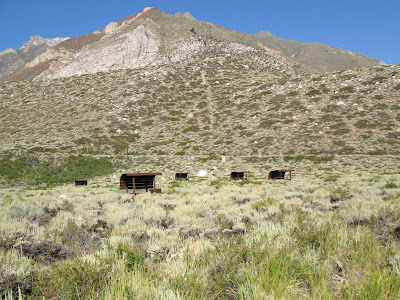 What happened was that in June, 1998 there were two earthquakes. They do not know which one produced this, but it was either June 8th or 14th. The boulder, about the size of a small car, came down here and carved into the hillside the faint trail you see in both pictures. It also trashed the road before it reached its final destination in the campground. The road has obviously been repaired. 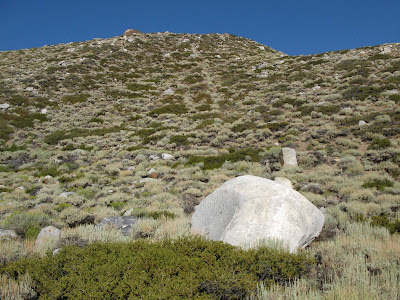 Check out what they say here under the Hilton Creek Fault Scarp. The magnitude according to this source and the book above was around 5.0-5.3.

Posted by The Great Silence at 6:40 PM

(GPS: N 34° 07.390 W 118° 15.515)
I have been holding back a bit on movie location posting. I intend to really start doing that again in 2010. I was over at Iverson Ranch and Corriganville again last week trying to figure out what I want to do next. I will explain more on this at the end of the month or near the first of the new year.
This is one that I finished up on the way home last week. It was one of the first ones I intended to do way back when I started up the blog. Actually, I have been to this location lots of times. What was holding me back is I would always have something happen that would either mess up my pictures or video. The pictures below were done on a few different days, and the video is a combination of two days. I call this the Glendale Train Station, but I think officially it is the Glendale Transportation Center. 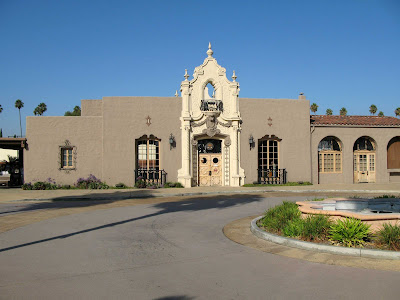 I do enjoy Film Noir. When I started this blog I was going to do a lot more noir locations, but decided to pursue some of the other stuff I have on here instead. I do have a few others I might do in the future, but noir locations will probably be a bit rare on here. Double Indemnity with Fred MacMurray and Barbara Stanwyck is a favorite of mine. If you have not seen it, then you must since it is a classic movie of suspense. This train station is a very important part of that movie. Here is where they drive the car in. 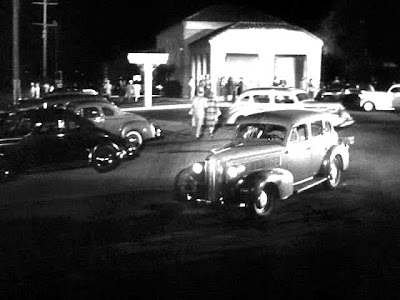 The sign above in the movie picture does say "Glendale" even though my capture from the movie is a bit overexposed there. My picture has the same sign, and I am close to where they parked. You can tell there are differences with the station from then and now, but this is it. 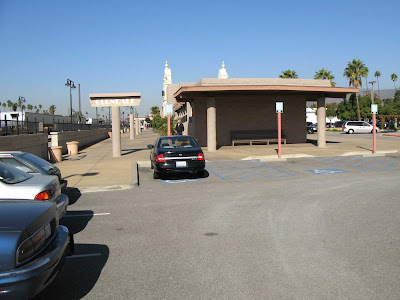 To my left (from the above), is where the train comes and goes. This is where Barbara would have led Fred in the movie. 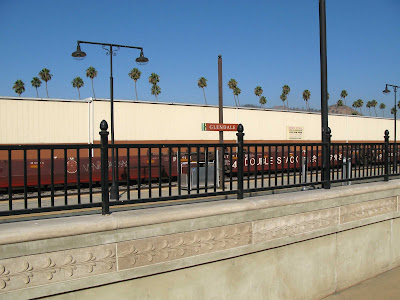 There is a model in the train station. I think the cars are parked a little further to the left of where the sign is. 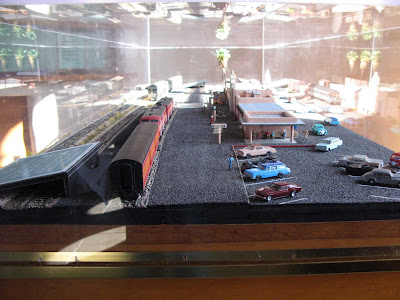 You can read the wikipedia article on the station here.

My short video on this:

Posted by The Great Silence at 5:33 PM