"Come on, now. It's gonna be a nice day" (The Alabama Hills Series)

I have actually talked about this area before. I call it the "The Tall T" area since most of the movie was filmed at this point. Refer to my other previous entries about this:

I like the ending of this movie because after the bad guys are defeated Randolph Scott "comforts" Maureen O'Sullivan with the following words: 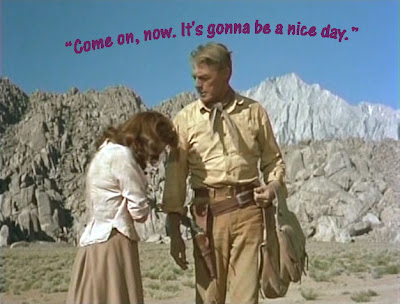 And, yes, he is very dry and wooden in saying it. So, It comes across a little too sarcastically. In the picture below the exact location would be in the lower middle of the road. I parked to the left of there. You can see Lone Pine peak in the background in both pictures. Mt. Whitney is further to the right in my picture. 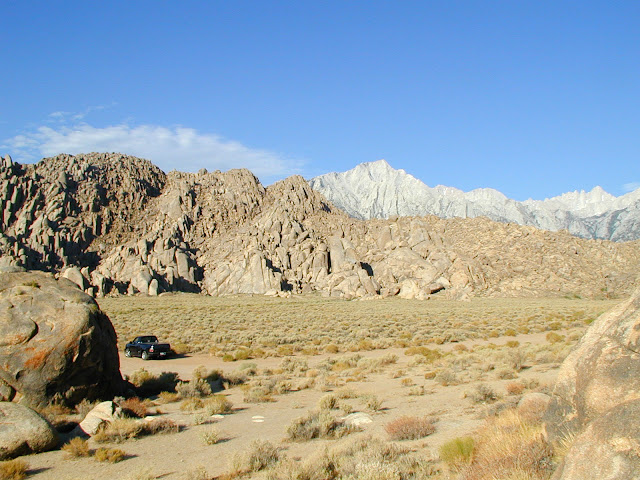 Of course, whenever I am in the Alabama Hills area it is always a nice day no matter what the weather is like!

The music in the video is taken from Song of the Volga Boatmen at Incompetech.com
Posted by The Great Silence at 1:08 PM No comments:

Yeah, But You Don't Have to Lose!
During last years Labor Day, I went to the Huntington Beach Library in California for their Civil War Days. I decided to go to the opening battle reenactment and check it out. I was telling everyone that this year the Confederacy would win! This is sort of a running joke I have since watching an episode of Southpark where Cartman tries to get the southern side motivated to actually win the war. Knowing the true history of the events, as most people in the U.S. do, I was really shocked when I got to the library area. 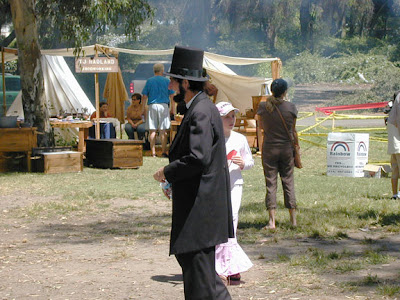 I actually saw Abraham Lincoln later in the lunch area. He was telling everyone he was 120 years old or so. 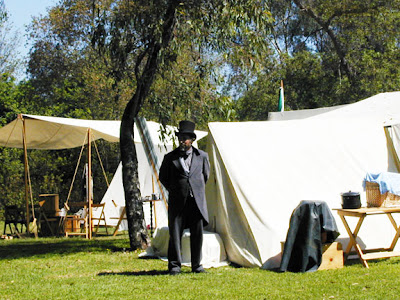 The above is Jefferson Davis of the South. I saw the Confederacy side as soon as I got there and I was naturally very interested to see what they were all about. One of the men at the Richmond, Virginia "Capital" house was telling everyone that, "We can still win this war! It is 1862, and I like our chances!" Funny! 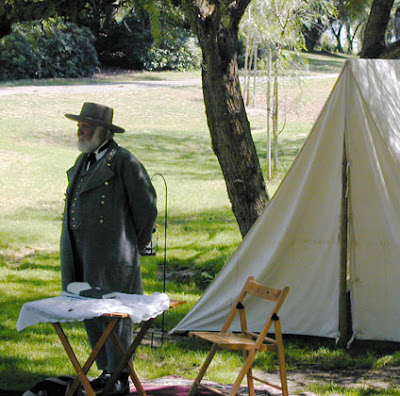 Above is General Lee near his tent. When I got there most of the troops of the Confederacy were marching and preparing for battle. Jefferson Davis actually gave them a pep talk. 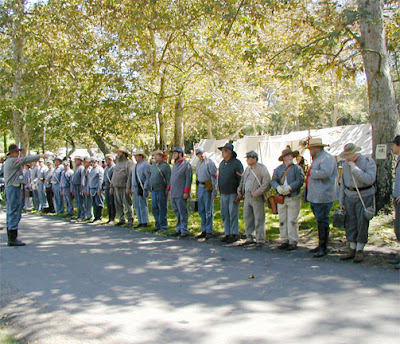 I went to the Union side and was shocked to see that there was hardly anyone around. I figured they must have been out marching, but no one was around. A lot of tents, but a lot of empty space. I did finally see some soldiers marching around, but the area was not as well populated as the Confederate side. I ate lunch and then prepared for the battle on the field. 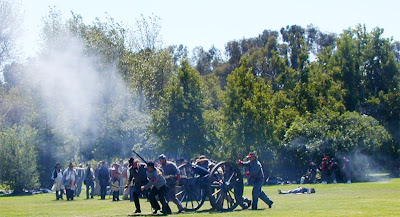 The Confederacy struck first. It was like being on the sidelines of a football field that was shaped like a slight arch. There were many people around so it was difficult to take good pictures. The Union pushed the Confederacy back. The picture above is near the end when the South stole the cannon. 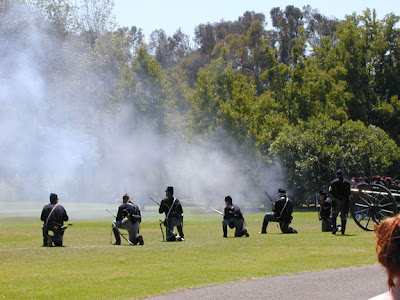 The above picture is some Union troops attacking. 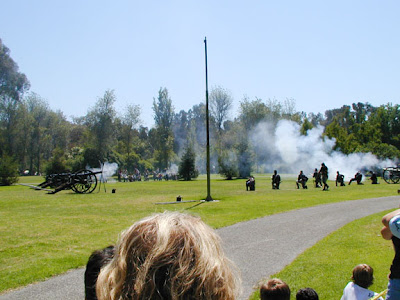 Again, there were people all around. 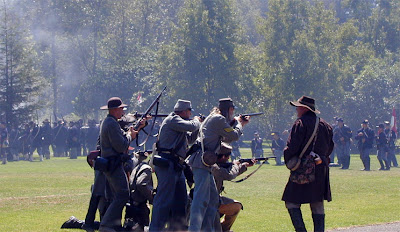 The funny thing is the Confederacy actually kicked Union tail all over the place. This was a solid Union defeat. I was laughing inside because this year the Confederacy had won. However, keep in mind that they would skirmish another three times, but I would not be there since I left just after this.

I went to listen to one of the southern men speak about their weapons. He went into this long diatribe about how, "Lets suppose that God forbid the South loses the war. Wouldn't you suppose that 'West Virginia', the land stolen by the Union, would be returned to Virginia. By all rights, morally, legally, biblically, and in all intellectually honesty it belongs to Virginia." At that point I was wondering what type of alternative universe I was living in. It was very bizarre.
Overall, I had some fun that day. I learned that I would have probably wanted to be on the Confederacy side since they were more charismatic. They just kicked butt all the time I was there. All the different regiments were there looking for recruits. I even saw some Texas Rangers. I only saw one black guy there. Which side was he on you ask? The Confederacy! Who could blame him!

As a side note, I have three relatives that fought in the Civil War. A great grandfather, Seaborn Yarbrough Sr. fought in the Confederacy. I have two other relatives who fought for the North. They are a little more well known. One would be Rutherford B. Hayes who would become President; he is my 4th cousin. Also, John Millholland, who I have the honorable discharge papers of, is another great grandfather. If you ever read a biography about George Washington Carver who might come across John and Helen Millholland who he stayed with and encouraged him to go to college. Those are my great grandparents.
Posted by The Great Silence at 2:27 PM