Happy Black Friday! Actually, I'm not sure if I'm supposed to be happy or wish that on anyone else on this day. I pretty much stay home on Black Friday. So, wish you well if you are one of those that braves the lines. Not my thing, but if it were a long distance hike...

From Sabrina Lake I drove back to the turnoff to North Lake. It is a dirt road that goes to the lake. Since I'm a little different to say the least, I decided to hike in instead of driving to it. I was just in the mood to explore the area and not drive back and forth. So after about twenty minutes of up hill and curves I encountered the lake: 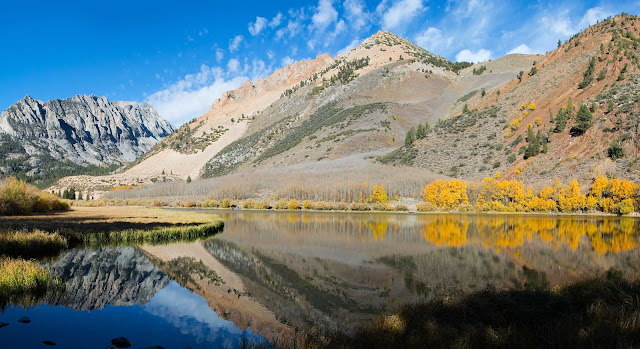 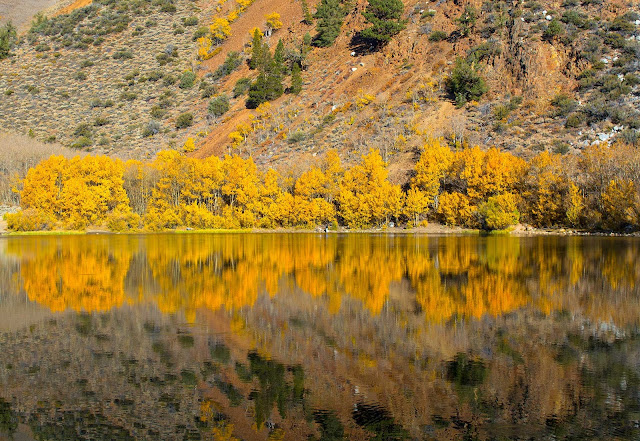 So, I was happy to get this. See the tiny fisherman on the other side of the lake?

Again, like Lake Sabrina, this is another area I would like to come back to for some hiking in the canyon.
Posted by The Great Silence at 8:00 AM

I want to wish my fellow Americans a Happy Thanksgiving! If you are somewhere else then I wish you a great day as well.

I'm going to keep things simple today. This is an area that I haven't spent much time at. About a twenty minute drive outside of Bishop, CA gets one to a couple of different areas in the High Sierra. One of these is Lake Sabrina: 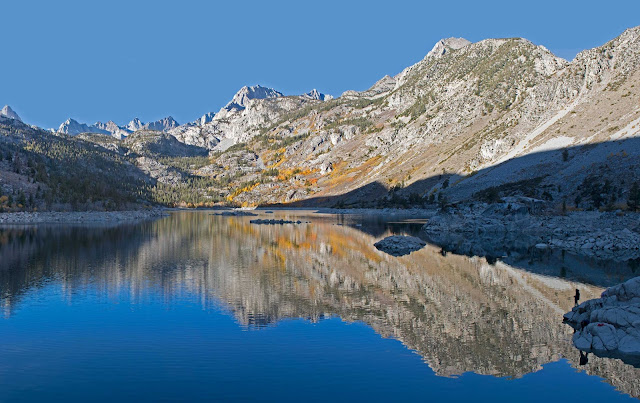 I was there during the morning hours, and the sun had not quite cleared the canyon. 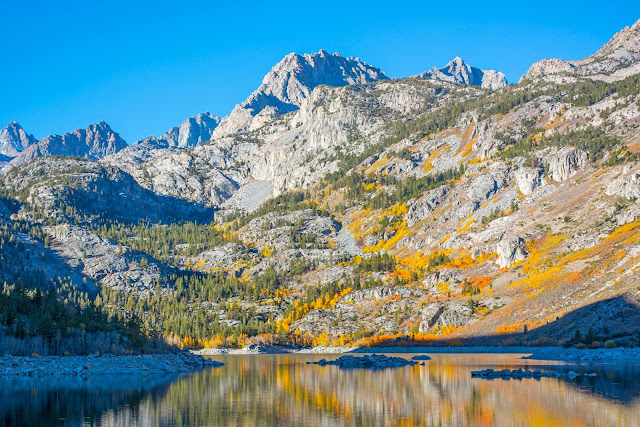 I zoomed across the lake for this shot. There were some fall colors there.

It's been a while since i watched Star Trek: Insurrection, but this lake was in that movie (as well as Convict Lake which is about a thirty minute drive away). In any case, I hope to return here in the future to hike some of the trails here.
Posted by The Great Silence at 8:00 AM

A few months ago I was at Tankland (Aka The American Military Museum) in El Monte, CA. It is a big lot of military vehicles with the emphasis on the American tanks. It was really fun to see some of these machines in person. 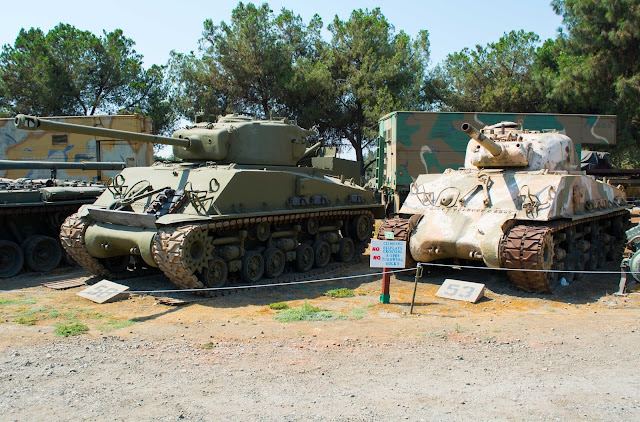 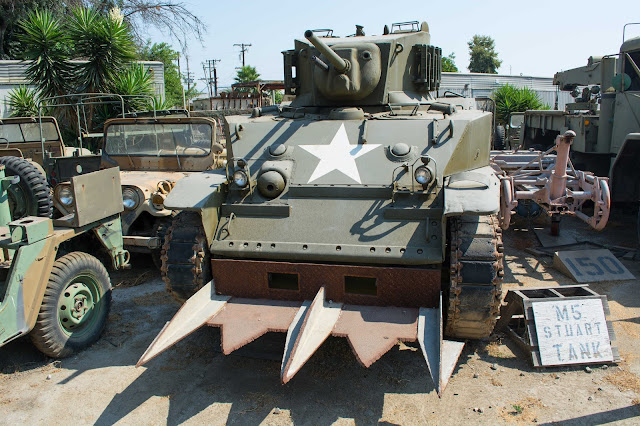 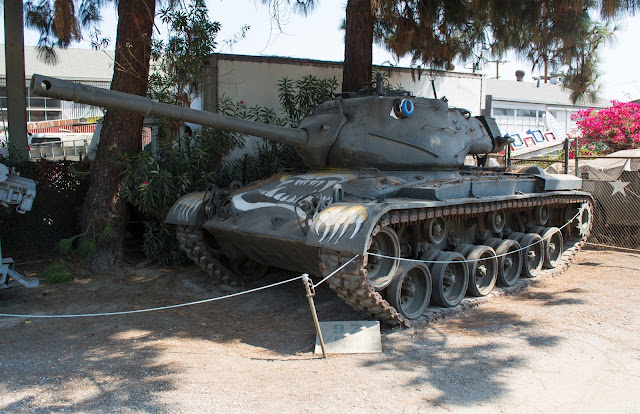 M47 Patton Tank from the side. 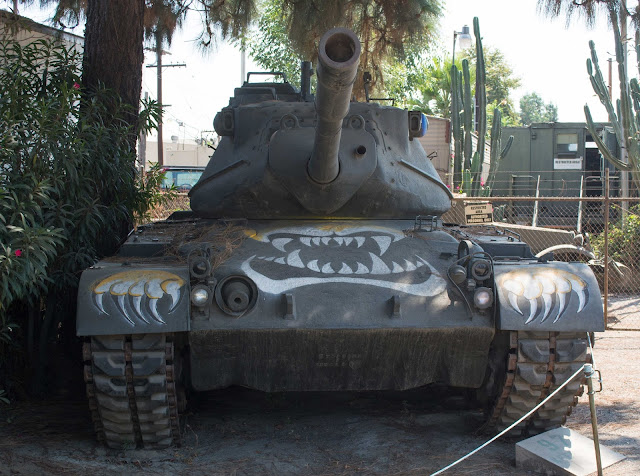 M47 Patton Tank from the front.

Go here for more Tankland pictures I took on Flickr.

I took video too. Sometime in the future I will edit a video of this place as well. I'll link it here at that time.

I just wanted to acknowledge the Vets of the U.S. and other allied countries today. Bless you! Thanks for keeping me safe.

Recently, certain American football players have made the news in not acknowledging the American National Anthem while it is played before their games. They have every legal right to do that, but I do not believe they have the moral right to do this. Whatever past sins the U.S. has been apart of, those players have not made the sacrifices that our veterans have made. Many of which are minorities. I used to enjoy watching NFL games, but I refuse to watch anymore until those players apologize. My sacrifice is not the same as landing on Normandy, but I will not spit in the face or on the graves of those who have given me my freedoms.
Posted by The Great Silence at 11:28 AM

Survival of the Fittest

I wanted to upload this video I took a few months ago. I thought it was kind of interesting. I was not sure who I was rooting for while I was watching it take place:

What I thought was “fun” about this was how prey used its environment to its advantage. Normally a predator like this would completely overwhelm the prey. However, due to the ‘smartness” of the prey it was able to do what it did. I had one of those “Bruce Lee” moments while observing nature in action. A powerful opponent can be stopped if you can find a way to neutralize its strengths.

A few thoughts on the election (really about the media):

I did want to make a few comments about yesterday’s U.S. election. As I have said in the past, I really don’t like it when entertainers or bloggers I follow that specialize in something that has nothing to do with politics feel the need to go partisan. There is a guy with a nature blog that does this to a predictable level during every election cycle that drives me nuts. So, I hesitate to do too much of this on my own blog for the same reason since this is not a political blog. However, one of the issues that comes up from time to time on here is the sources of our beliefs. What good reasons to we have to believe something?

What bothered me about this election was not the candidates involved. It was the way the media handled it. Imo, they were not even trying. Or, from a different perspective, they were trying way too hard. I would log into my e-mail everyday and before I would do that this past year I was getting “hit piece” after “hit piece” on one candidate. There was a blog earlier this year that I mentioned my frustration with the media on this issue.

I’m not a fan of conspiracy theories, but one day I was on the Reddit conspiracy message board. It was chilling to see that they had come to the same conclusion I had come to. There was one message that showed how all the news stories over a few days to a week were so anti-Trump to the point of absurdity. It actually shocked me that I’m in line with a conspiracy site. That’s aliens and UFO territory there, right?

The expectation is that the media is reporting and representing the issues the public cares about proportionally to the views of the public. The media should not be trying to create reality or influence the public this way. That is what Joseph Goebbels style Nazi propaganda did. I wonder if members of the media truly thought the way they presented the election was fair, or are they really that biased and blind? As it is, it came across like they were bought off by someone. That is what I get off of popular sites like Yahoo news where someone is just paid off by some group to promote their views.

The notion of a “fact checker” is always an interesting idea to me. Who “fact checks” the fact checkers? Especially when they have different values, assumptions, and agendas.

I need to add that Wikileaks exposed a lot of this too. CNN was shown to be colluding with the Clinton campaign. Preparing questions to Clinton before the debates, asking what questions should be asked to other candidates, asking about what they should be publishing, etc.

In any case, if there is one thing that I took pleasure in, it was seeing the public give the media a dose of reality. The media was defeated big time. Something to remember as you watch or read anything from the media in the future. Which leads to the following article:

I hope the media starts to reflect a little more like this article does.

One of these days I will talk about what I call, "Playing Psychology" when you can't win someone over with facts and good reasoning. The article hints at that on a few points.
Posted by The Great Silence at 4:36 PM

Email ThisBlogThis!Share to TwitterShare to FacebookShare to Pinterest
Labels: Media Hate, Survival of the Fittest

So this is a continuation of the last blog which was really dedicated to my return to the Lon Chaney Cabin. As I said, when I got to the cabin there were already people there which kind of ruined the moment of making the type of video I wanted there. So, somewhat demoralized, I just skipped the cabin and moved on for another forty-five minutes to an hour of uphill switchbacks in an elevated canyon. Finally, I discovered Lake #1: 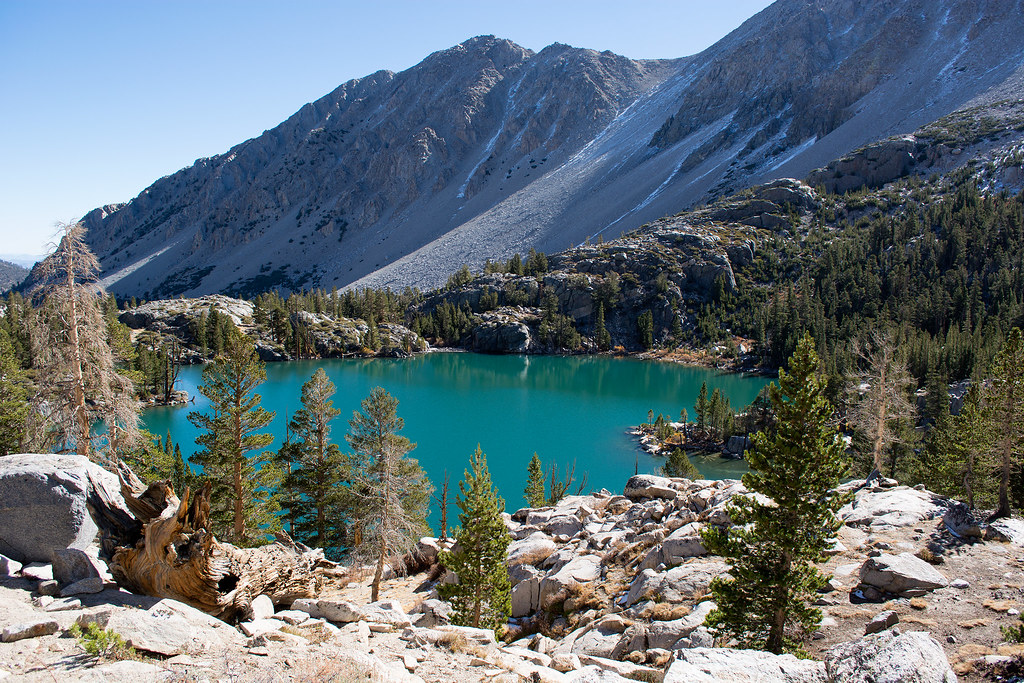 That picture is looking back at it since I didn't like any of the views of it from the trail. I was always getting blocked by something that didn't really capture the beauty of it. I'm sure I could have gone off trail to get better pictures of it, but I wasn't in the mood to do that. The thing was I knew Lake #2 is connected with it, and just a matter of minutes of getting to that lake. 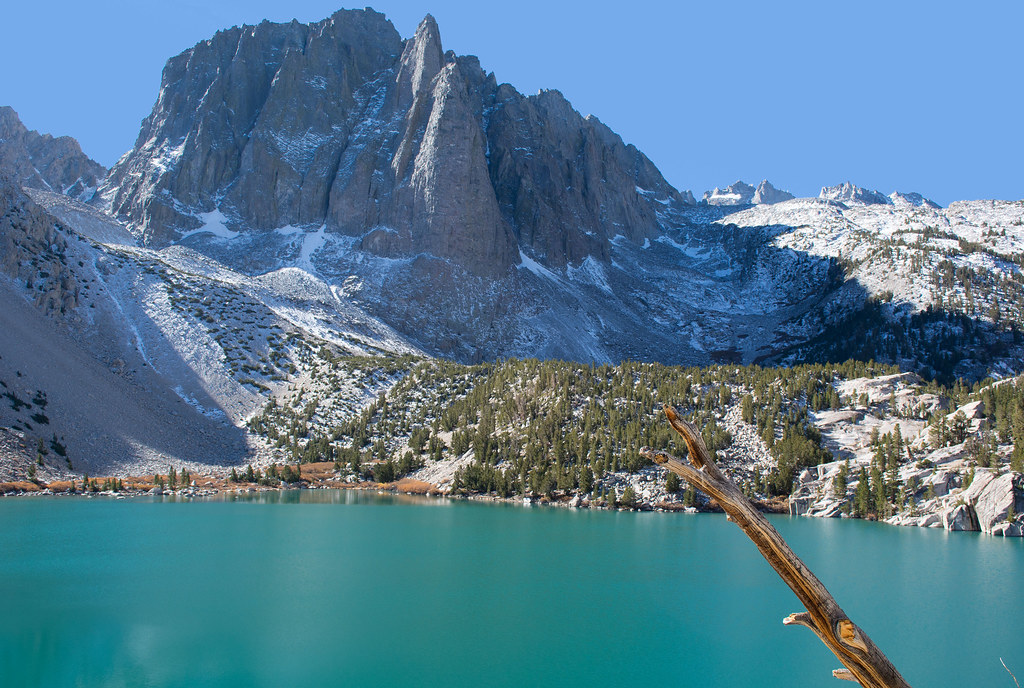 This was really the "payoff" lake as far as I was concerned. This was the personal goal of the hike that morning since I had hiked to the cabin before. I had seen pictures of Temple Crag in the background so I had always wanted to view this lake in person. I like the "hand" reaching toward the crag. :) 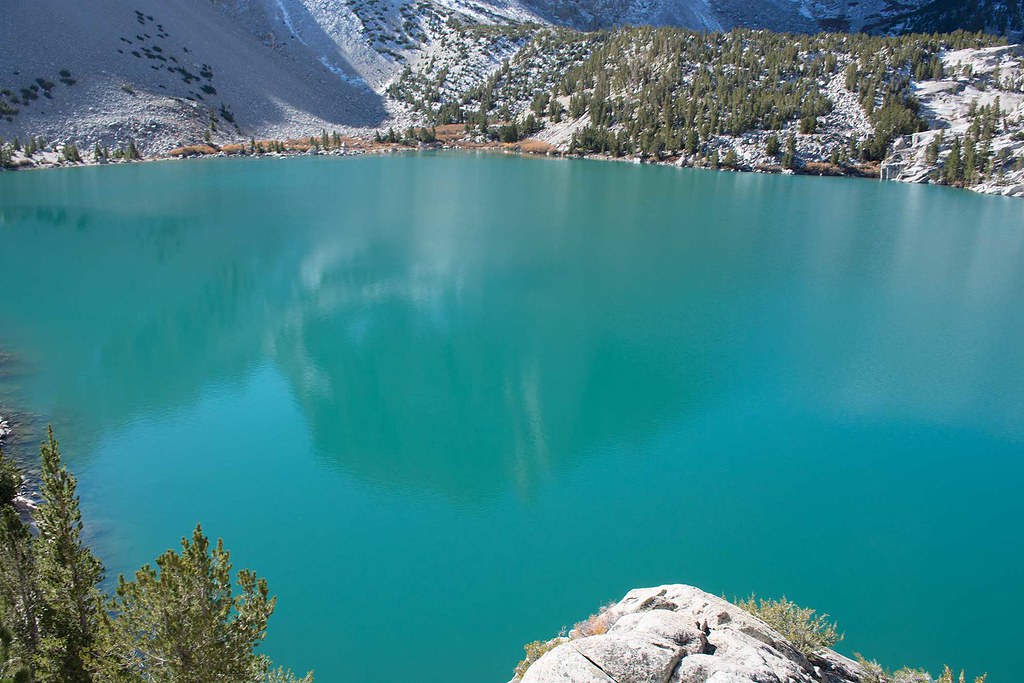 These are glacial lakes so that have that glacial tarn turquoise look to them. There are many more lakes back here, but I turned around at this point. I am inspired to go back and explore beyond this point. So in the future I hope to have more to say about this area.

I did an alternative video for this hike that I am calling the "Majestic Edition".The area is beautiful, and I wanted something to reflect that. I cut out some footage, added the lake footage at the end, cut out the special effects, replaced spooky music with more uplifting music, and cut out the intro narrative. It is unlisted, and I don't expect many to view it, but it is okay to share with others if you want to. I just wanted to get away from the "horror" theme for this one.

The music used from Incompech.com is called Brittle Rille and Majestic Hills.
Posted by The Great Silence at 10:26 AM