(GPS: N36 36.235 W118 07.125)
Here is another one in the same area. While the Lone Ranger Ambush area is shot to the west, this area is shot to the north. The angle I shot of it is not quite right, but it is close enough. The way I figure these areas out are I look at the rocks. People change, environments change, but rocks are slow to change. 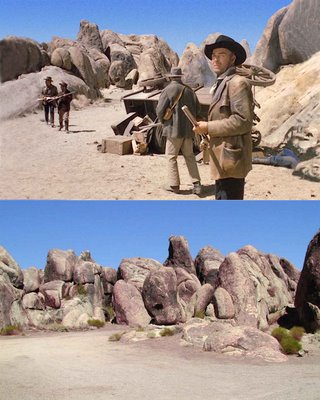 In this picture there is a “skull” looking rock facing down. If you compare that rock with the movie photo above you can see that rock looks smaller. Also, the higher rock looks a little off. It looks like if I wanted to get a closer looking shot to the original movie shot I would have to move back a bit and then move left.

Hangman's Knot is an interesting movie. This is one of those westerns that doesn't completely follow the rules. Randolph Scott is actually on the wrong side on this one. The Civil War has just ended and the scene above was done without them knowing the war was over. As Confederates they were still fighting the war. Most of the movie deals with the Confederate band trying to get out of the mess they have created. The first 30 minutes is shot in Alabama Hills in the above area.

Posted by The Great Silence at 8:48 PM

(GPS: N36 36.235 W118 07.125)
One of my favorite stops off the 395 in California is Lone Pine. It is a great hub for lots of things I like to do. Lone Pine is a small town that has only one traffic light. If you head left (west) at the light, in a few miles you will reach the Alabama Hills. The Alabama Hills area is a really great area to see all different types of rock formations and awesome views. Not only do you get to see strange rock formations, but the high Sierra peaks of Mt. Whitney, Mt. Langely, and Lone Pine peak are all in the background.

There are many reasons the Alabama Hills is an interesting area to visit. One of them is that many old movies have been filmed there. In fact, the people in Lone Pine have a film festival every year in October where they give tours, bring in old actors/directors, etc. Mostly westerns were filmed there, but occasionally a movie like Tremors will be filmed there. I know of a few locations and intend to post some of them here.

The first area on my list is the area known as the Lone Ranger Ambush Site. 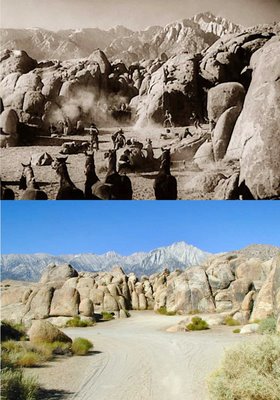 This area is important in the history of the Lone Ranger since it is the first time on screen that the outlaws ambushed the Texas Rangers killing all, but one. That one person was rescued by the American Indian Tonto and became the Lone Ranger. The top picture was filmed in 1938 and stars Lee Powell. As an important footnote, Lee Powell died a few years later fighting heroically in WW2 in the Pacific. The original 15 episode serial (264 minutes) has not been restored and released on dvd. The chopped down 68 minute version released in 1940 was released a few years ago as Hi-Yo Silver. The GPS coordinates are listed above get you into the general area, and it is just a matter of aligning yourself with the above pictures.

One of the coolest things to get is a global positioning system receiver. It is the satellite navigation system that can tell you by latitude and longitude coordinates where you are at any point on the planet. I have a Magellan Explorist that I have been using since Christmas. The reason I bring this up is just in case someone will not know what I am referring to when I use coordinates to show where some of the places I like to go. The coordinates I will give will get you pretty close to the things I will be talking about. So, if something sounds interesting to you, then you just plug in the coordinates and follow the arrow. Some of the locations I have found were through a gps based game called geocaching. People go out and hide stuff in different containers, you find them, and log your finds. I really enjoyed the game because it sent me to a lot of cool locations, but I kind of burned out of it for a few reasons. Anyways, if you don't have a GPSr then go out and find a one. You will not regret it.
Posted by The Great Silence at 7:33 PM

Why Am I Doing This Blog?

I have to admit I am not really into "blogs". I guess they give people a chance to vent or state their opinion. Looking over the internet the past 11 years I have seen lots of people write all sorts of stuff. Sometimes I wonder about people that write long rambling type of messages and think that people are "hanging" on ever single word and syllable they write. I often joke to my friends about me writing "award winning messages" on the internet. I tend to think people exaggerate and make themselves look a little more important on the net than they really are. I hope I do not do that here.

The reason I decided to create this blog is I am putting together a few of my interests. This will be done mostly for people I know, and I will refer them here. However, it is certainly okay for others to look around. I like going on interesting hikes and places that are a little out of the ordinary. I intend to record them here with GPS coordinates so you can see where I was at. Along with that I intend to talk about some of my favorite movies which, believe it or not, relates to why I like to go hiking and to strange places. So, you should see some things related to westerns, samurai, and noir movies I have collected over the years. Finally, some history related to the above will be talked about too.
Posted by The Great Silence at 5:21 PM