(GPS: N34 05.820 W118 06.375)
In this blog entry, I am going to try to kill three or four birds with one stone. Originally, this blog was supposed to be connected to the last one. After thinking things through on this I decided I had better split them up or I would make both the blog and video too long. So, this will be another of the foundational background blog entries.

A year ago, this was the first mission of the four I had gone to for this blog. I have covered two already and will link them below if you have not seen them. When I went to this one I took many pictures and took lots of video. At that time I had not done any Ramona stuff yet, nor had I gone to the other missions. I had this idea I was going to be really detailed in covering this one.

That was then, and this is now. I am a bit "missioned" out right now. While not every mission has the exact same structure, I am kind of to the point I feel I do not want to waste as much bandwidth on this one. This is not a cheap shot toward the San Gabriel Mission. It is an important one and I would give it pretty good marks as a museum. I am just going to hit a few highlights and let it go at that.

The missions are important part of the background to the Ramona book, because the Indians in it are Mission Indians. Let's cover some of the basic history to the missions:

Spain owned California from 1769 to 1821. A series of missions were created during this time period as religious and military outposts. The goal was to convert and colonize the local Indians into the Spanish way of life. In theory, the missions belonged to the Indians and after a time the governing process was to be turned over to the Indians, but that never happened. Spain's reign ended in 1821 as Mexico gained its independence.

Mexico then owned land from 1821-1848. Originally, the missions and land were going to be kept the way it was, but a few years later the secularization of the missions began. Basically, the land was confiscated and given to private individuals. The priests could keep the church, the quarters, and priest's garden. The private individuals that received the land grants could hire out the Indians to work the land. This is what happens in the beginning of Ramona. Finally, after the U.S. war against Mexico, the land became part of the U.S. in 1848 as it is until now.

The mission that would become the San Gabriel Mission was founded in 1771, but due to a flash flood that wiped out the crops it was relocated five miles north to this location in 1776.

This is what the entrance to the church looks like. I did not go in because they did have a wedding going on. For our purposes, like I mentioned in the last blog, this is where Ramona's dad was married in the story. 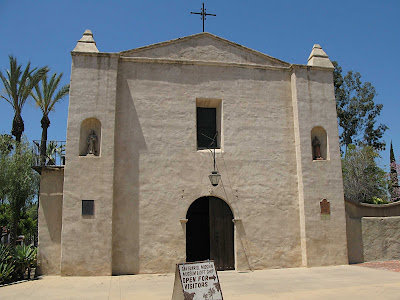 Here are the mission bells next to the church on the side of the mission. I should note here, that according to some, Ramona's dad was based on the local resident Hugo Reid of Scottish descent. He, like Helen Hunt Jackon, criticized the treatment of Indians in the mission system. 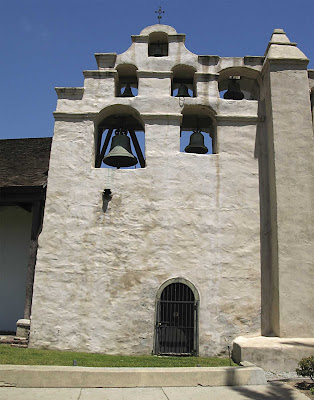 Upon entering this mission it is like a square, but the way it works out is it is like walking around a big U turn. The video covers the highlights better, but let me show a few things here. After seeing the nice fountain they have one enters the cemetery next to the church. 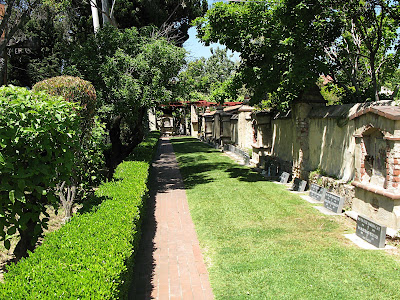 This is the oldest cemetery in Los Angeles. The crucifix is dedicated to the 6,000 Tongva Indians that were buried here. 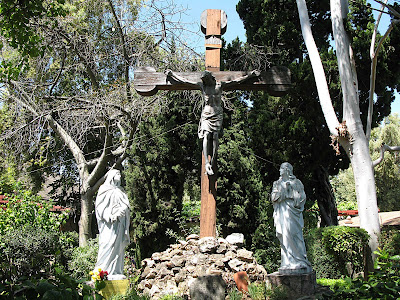 In the video I show a plaque that is partly dedicated to Padre Garces. He did not die here, but did come here through the San Bernadino Mountains. Also, Mountain Man, Jedediah Smith came to this mission through that trail. After struggling through the Mojave Desert Jedediah came here with his men to rest and recover, but the concern was that they were U.S. spies. So, Jedediah was sent to San Diego to be checked up on. He was eventually told he must leave California so he took his men north and crossed back somewhere in the northern part of the Eastern Sierra. He did spend some time at this mission resting and getting healthy. I will link to the marker for Garces and Smith that I hiked to below. 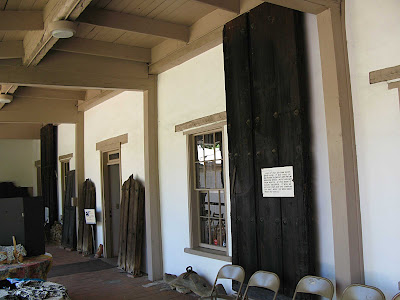 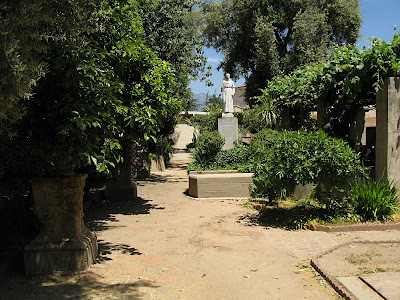 At this point I am going to stop and let the video show what is over on the other side. The one thing in the museum I thought I would show is it has a picture with Ramona tourists in the 1880's. If this is the case then it means that tourists were flocking to the sites right after the book came out. 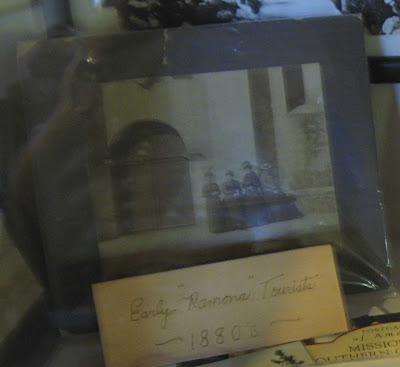 It is important to note that while Ramona was written as historical fiction, in the end, it was a propaganda piece. There are some things that she glosses over and left out from a historical perspective that would have undermined, to some degree, what she set out to do. I probably will not talk too much about this as we go on, but there is at least one site that I will go over along the way that the violence used in the novel is not related to the violence the site is remembered for.