(N36 36.385 W118 07.085)
Here is another man made artifact from the old western movie making era. This is very much like The Gunfigher Waterhole I chronicled last year.
Locations like this are not always easy to find due to the "open field" look it has. Just using the still picture below one would have a harder time finding the area unless one really already knew the area. 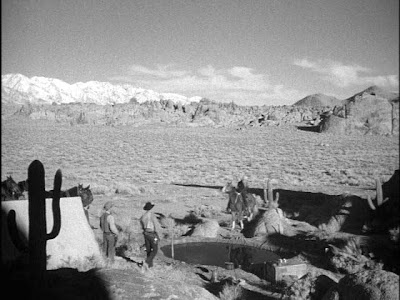 Even with the picture below it is still tough to compare. My picture is lower on the ground, but if you click both pictures and look closely in the background you should be able to line up some of those rock formations. Start with the small hill in the background of the far right side. It should make sense if you then compare the rocks going left in each picture. 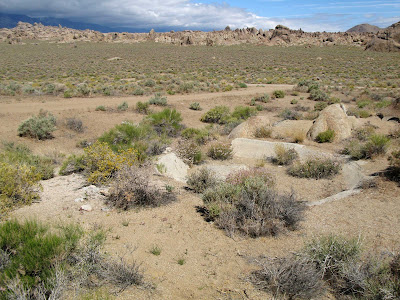 In these two pictures I took, Gene would be on horse, Champion, between the two rocks just above the remains of the waterhole slightly to the right in each picture. They are not as easy to see because of the sagebrush that has grown in here and the rocks blend in with the dirt. Of course, the main reason we are here is to see is the concrete remains of the waterhole: 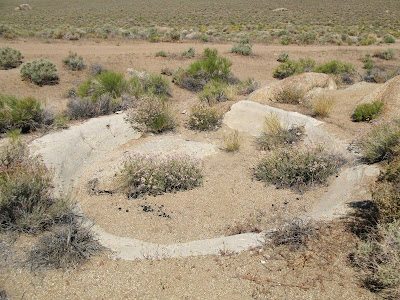 One location hunting principle to note is that most movie filming is not done too far from a road. This is because to film a movie one needs to have the equipment at the location. Just about everything I show is near some road and not some backcountry area that has walking only access. As you can see in my pictures there is a road you can drive on just beyond the waterhole. I actually did drive on it to get to this location, but I have walked to here before since it is not too far from the main movie road. 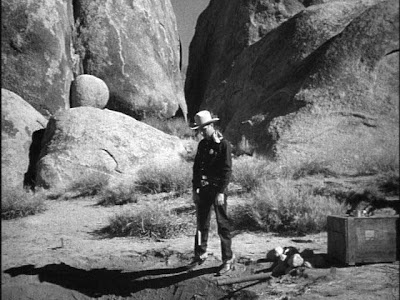 Gene is standing just above the waterhole. Now, below, you can barely see the waterhole and you probably would not know without me saying so, but you can see that little rock rock in the middle that matches the one in the above picture. After you get that little rock you can start matching up all the nearby rocks. This is one of those cases where one might see the movie picture and the picture below and not think it was the same area. 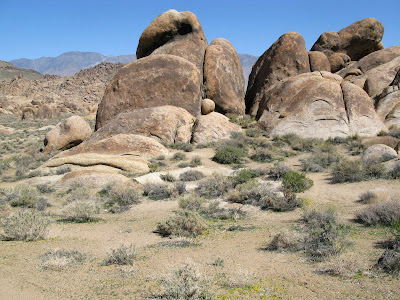 There are a lot of movie locations in this area that are easy to find. Sometimes there are some that can be very difficult because I do not have much to work with in regards to the background and rocks nearby. If someone were to give me the above picture with Gene, told me to go find it, and that is all I had, then that would be pretty difficult. Unless I already had those rocks "burned into" my mind from my previous trips I would have little to go on.

There are lots of scenes in movies I have seen with rocks like the above and know I have walked passed them, but I can not always remember where they are. Even if I have pictures of those same areas it is not always easy to compare and identify.

Posted by The Great Silence at 3:20 PM