In the play, the intermission is right after the fiesta scene they have at the rancho. Then, after a bit of slapstick from some of the minor bit characters while everyone is coming back to their seats, we have the two scenes that create the great turning point of the whole story.

The problem for Senora Moreno at this point is trying to resolve the Ramona/Alessandro situation. The idea is Ramona has brought shame to the rancho with her actions regarding a low class Indian. One of the Senora's thoughts is to send Ramona away to be a nun. The Senora has always seen Ramona as a burden from her sister. This would resolve dealing with Ramona once and for. Although, there is some idea that Felipe might take Ramona as his wife, and that would be more respectful in her eyes.

The Senora does have one other card to play that was provided by her sister before her death. An iron box with jewels, a hankerchief belonging to her father (Angus Phail), and a note from her adopted mother (the Senora's sister: Señora Ortegna). This is somewhat like an inheritance for Ramona, but in order to get it she must marry "worthily" otherwise the inheritance becomes property of the church. This is essentially what the note reveals. 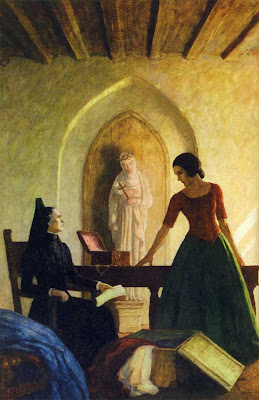 So, the jewels are what the Senora uses to bribe Ramona back into her way of thinking. 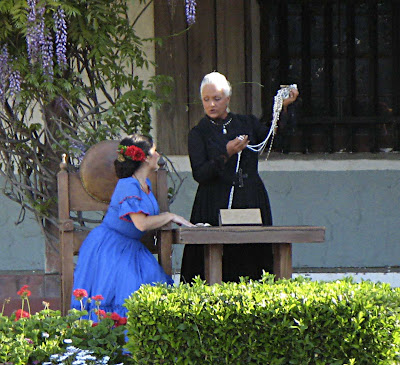 As was mentioned at the very beginning of the series, the reader is told within the first few chapters that Ramona has Indian orgins through her real mother. She is also Irish through her father, although that is not as emphasized in the play as much as in the book. Both the book and the play have a few other characters discuss her origins. Then, it is finally at this point that Ramona learns of her real mother and her Indian heritage.
One thing I should point out is I cut out of the play's scene just a little early in the video. After rejecting the jewels and revealing that she will marry Alessandro no matter what, Ramona runs out, the Senora falls down as if losing consciouness. This is to indicate that her time is coming to an end, and it is also the last we see of her in the play. In the book this part does not happen for this scene.

I mentioned some about Ramona's birthplace early on in the 2nd and 3rd blogs for this series, but I also mention some of her origins in the 9th blog if you want to go back and check those out.
Posted by The Great Silence at 9:23 PM