Like I lot of places I have covered on this blog in the past, this is another one that I had hoped to have up a long time ago, but never did. My trips to Iverson Ranch go much further back than this blog, but back in those days I was not as "hardcore" about hunting these places down as I have become over the years. This is one of those spots that I was always trying to get good pictures and footage of, but never did.

How come? The lighting I had was never really that good during the time of the year I would go. I would get there early so there would be too much shade or the sun would not be overhead. One time I shot okay video there, but then a month or two later I got a new camcorder so I would just tell myself I would go back for better footage. Then the next time I would go and the wind would be really bad with garbage cans falling over on the streets. I was tempted to post that footage just to show the crazyness of it. Even with this "latest footage" from a year or two back I just sat on it thinking I might go back to Iverson again. Well, enough is enough, lets just do it now.

So, walking down one of the side streets with all the condos around one can see this big rock ahead. It has been seen in old b-movies, but you have to look for it. I've got a story about the condo on the left, but I'll get to that in a moment. The key here is to walk to the end of the street you see and turn right. 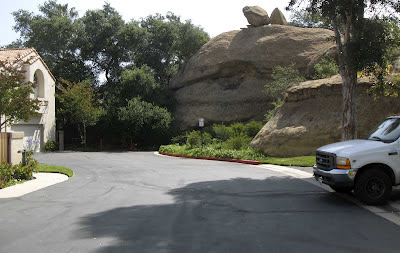 This is known as the Devil's Doorway. It is an arch hat still exists today, and both sides have been used in lots of old b-westerns and serials. This next photo is from Buster Keaton's Three Ages silent movie. Here Buster Keaton's character runs over the top of the big rock avoiding the other caveman. 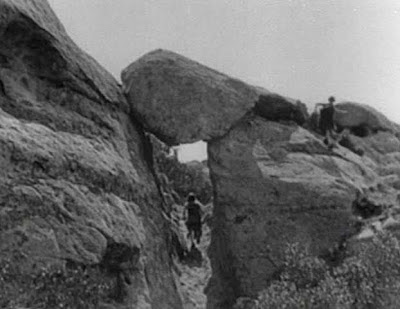 Here is how it looks these days. If you look carefully through the archway you will notice a condo on the other side. 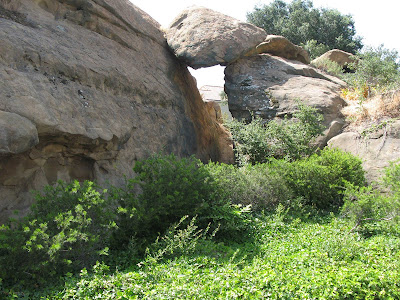 In the Days of Jesse James, Roy Rogers, Gabby Hayes, and others went through the arch to avoid being chased. 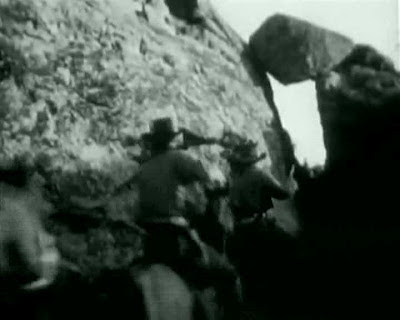 Gene Autry used it to slip away in Oh! Susanna. 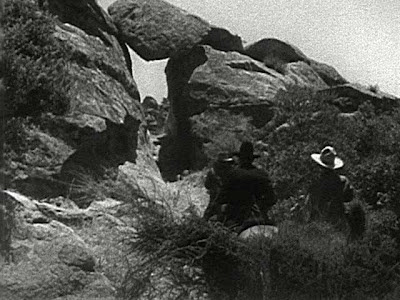 Looking directly through it. Lots of other examples could be listed of movies and serials that used it. I show a few others in the video. 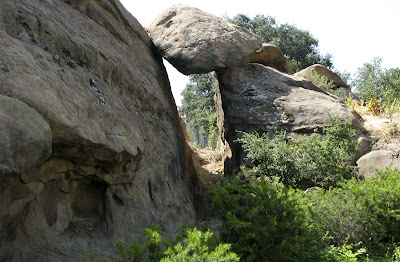 Before I post the video links I thought I would tell the story about what happened as I was doing the video of this area the last time I was there. I made the trip, and the first thing I did was walk right to this spot. With no hesitation I started making the video. I knew what needed to be done and what needed to be said as I am usually well prepared when making videos of places I have been to before. Within about 30 seconds of me doing the first take a dog started barking, and the garage door about 15 feet behind me went up! The guy who lived there pulled out with his car, and offered to sell me the rocks if I could find a way to transport them. We both agreed that might be a little tough. He was a friendly guy, but it kind of spooked me. That's one of those things that I have always explained about why I don't enjoy going to Iverson Ranch as much as other places: everything is a little cramped and you quite literally have your back against people's property. I added some of that footage with the dog barking and the garage door going up at the end of the video for fun. You wouldn't know it from watching it as I completely shut up at that time, but that is what happened.

Posted by The Great Silence at 5:52 PM