In my last blog I mentioned that it is highly unlikely earthlings will ever encounter intelligent life from space due to what is known as the “rare earth” hypothesis. Even if there is life, the problem of traversing the amount of light years to reach any other life permitting planet makes it practically impossible. But, what if we have “alien life” right hear on earth?

I think the closest thing we have to this type of experience is the ocean itself. Many of the creatures that live there are intelligent, but have that mysterious otherworldly appearance to them. That watery environment is one we don’t live in so it is almost like being in space. So, it is like visiting alien beings from another world. Many people have had similar thoughts about this. The most famous example is Douglas Adams The Hitchhikers Guide to the Galaxy series where he refers to dolphins really being aliens from another world. My views of astronomy have made me connect with the ocean world in much the same way.

Since I am fortunate to live relatively close to the ocean for most of the year, I have spent a lot more time whale watching and visiting aquariums during the past two years. When I was kid I used to go to the Marineland of the Pacific to see Orky and Corky the killer whales and other dolphins. Corky is still around and lives at Seaworld San Diego. The aquarium aspect isn’t new to me. On the other hand, my only experience whale watching when I was younger was a complete flop where we saw no whales at all. So, it was relatively recently I started doing this again.

A blue whale model from the Aquarium of the Pacific: 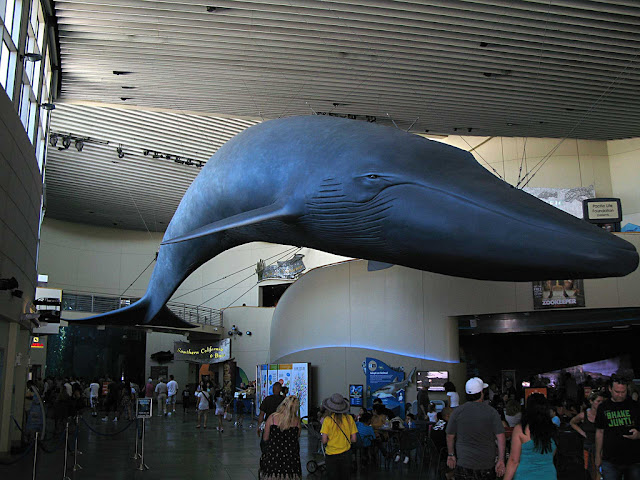 The blue whale is the one that we see the most of during the summer months. It is the biggest creature that has ever lived on the planet including the dinosaurs. It is the one I emphasize, but we do get fin whales, minke whales, gray whales, humpback whales, and sperm whales. The last two are more rare around where I live, and I have yet to see them in person. We also gets lots of common dolphin, bottlenose dolphin, pacific-white sided dolphin, risso’s dolphin, and orcas (killer whales). The last three are much more rare to see around here.

Here’s the deal. I originally was not sure I would ever upload any pictures or video about these animals for a bunch of reasons. One, there is already so much out there you can watch on Animal Planet, Discovery Channel, National Geographic, not to mention tons of stuff online already. Two, in the past when I uploaded anything on animals I always did it in a slightly humorous way, and I would always attract people that took it way more serious than I intended. Third, some of the “animal rights” crowd I don’t want anything to do with. Notice I say some and not all because, like within any group, you will find different types of people that are not all the same. But, I have encountered some really nutty people that I consider crackpots that don’t know how to make basic moral/ethical distinctions or basic reasoning itself for that matter. In fact, some I would consider “morally sick” if they really believe what they say they believe. For these reasons I really have hesitated whether I wanted to post anything at all on this.

I did start another blog just for this sort of thing to keep it separate from what I do on here, but I have not followed up on it. I’m still not sure what I will do with that. If I do start doing more of that then I will link it on the side with the rest.

I would highly recommend you check out these three videos which I did last week with the new camcorder:

Let me throw in these two that were done in August, 2012:

The Day of the Fin Whale

This is the Youtube channel that I will put up various whale watching videos:

It’s a lot more of a challenge to do these types of videos because of the conditions I encounter with the boat rocking along with the waves, the way the captain moves the boat, the weather conditions, whether the animals cooperate in the right place at the right time, and whether the animals are there at all. I have a lot of junk I will never ever post.

I don’t intend to use this blog for this because I don’t want my ocean adventures to dominate the content I produce for the blog. Maybe once in a great while if I get extraordinary footage, but that is it. I’m fine with keeping this blog the way it is right now.

As an important current event issue relating to all of this…during last year I had this idea that yesterday (July 20th) would be the day I announce “The Water Rises” project. Part of the name of the title is laugh and nod at the recent The Dark Knight Rises movie and the main villain of the story saying “The Fire Rises” at the beginning. “The Fire Rises” was also used as a promotional tool last year. Well, yesterday came and due to the tragedy in Colorado I did not feel it was right putting this up yesterday. I am truly in grief about what happened. Evil exists and there are powerful forces that are way beyond any of us that I am not sure we have the ability to stop with our own abilities. We are shocked with mass killings, but you know it will happen again in the future. All I can say is be aware of your surroundings out there and how you plan to get out of areas in a hurry if something does go down.
Posted by The Great Silence at 10:25 AM