So after the partial eclipse I encountered I was eagerly awaiting June 5, 2012 that would be the final Venus transit of the sun in our lifetime. So, here is how the sun was that day: 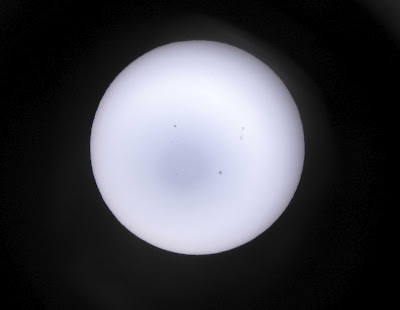 I took tons of pictures that day and I was constantly heading to the computer to transfer my pictures and see what was being said online. I had a few video feeds open, and there was a satallite taking pictures of the sun that I collected the jpgs from all that evening. I think the whole thing ended just after 9pm pst. Here is Venus making the transit: 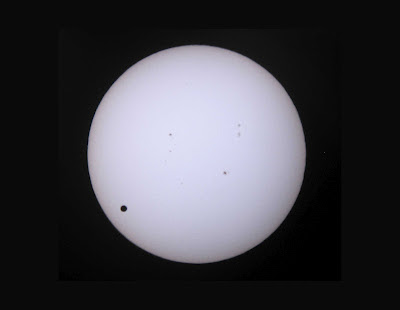 Through the perspective I have it in these pictures, venus continued going straight up and crossed the sun that way. 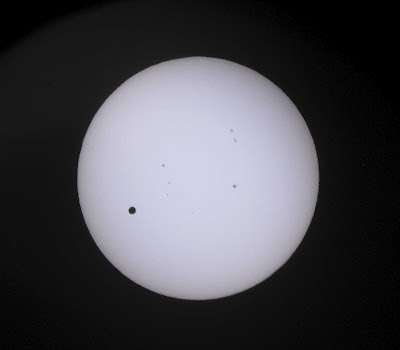 I think when I ended my telescope viewing the sun was just past half-way of its traversing of the sun. It was a unique event so it was worth checking out.

BTW, back in December I woke up early one morning to catch the Lunar Eclipse. Unfortunately, it happened almost before the sun was about to come up. So, it was not as impressive as it could have been. I was robbed the year before during a lunar eclipse because it rained that night. So, this one I finally saw with my telescope. This is a short video of the event just with my camcorder. No telescope involved with it:

Glimpses of the Moon

Now I wish I could show views of galaxies, nebula, stars, etc. on here, but unfortunately I would need to spend a lot money for astrophotography equipment. Not now, but I leave that open for the future. I have other things that are more important to me right now. So, this will probably the last I do of showing pictures of astronomical objects for the time being.

What is interesting to me is looking at all of these pictures that the Hubble Telescope has taken of all these galaxies and places so far away. There are so many light years between us and them that we will never reach them. When I was younger there was talk that since our sun is just a star then all those other stars must have planets. Therefore, there probably is life out there somewhere. However, that has changed in that we have found out that the earth and its conditions for life are much more rare that previously thought. So, we probably are the only intelligent ones around in this huge universe.

So, we will probably never meet "aliens" out there. Disappointing? Maybe. However, maybe there is an alien world out there with intelligent life...but it happens to be on our own planet. ;) I'll explain tomorrow in my next blog.
Posted by The Great Silence at 9:51 AM