I thought I would continue my little mini-series here on astronomical objects with a few photos I have taken in the past two months on some of the solar events that took place. I meant to have all this up right after the events happened, but I had so much going on that it was just not possible. Not to mention that on the days both events happened I had some personal issues that made me not enjoy doing this as much as I would have liked, BUT I DID IT ANYWAYS! You can't stop science! :)

On May 20, 2012 we had an annular eclipse where I live. However, I only got to see a partial version of it. Had it happened a week later I might have been able to see it in Reno, NV completely, but that's how things work out.

I am not going to try to fool anyone. I am a total amateur when it comes to telescopes and taking pictures with them. I have an eight-inch Dobsonian reflector telescope. I purchased a specific filter to be able to do this...stating the obvious: never look at the sun through a telescope without the proper protection.
To get better pictures of this event I would have had to thrown more money at some other items, but this was good enough. The astronomical hobby is one where you have to be ready to spend big money the more you want better features. That is something I am trying to avoid doing too much of right now.

What you see in the next picture is the sun with the black sun spots on it. Nothing was happening at this point that afternoon. 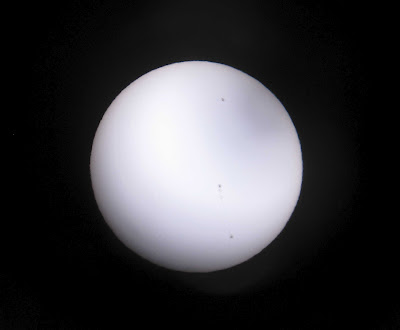 Then the moon started to intercep the sun. 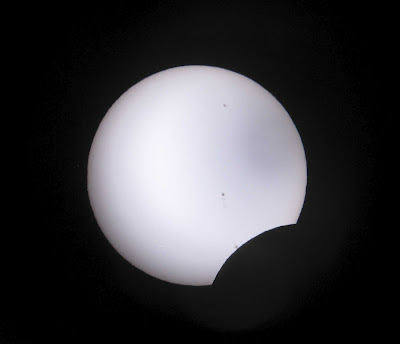 As more time went on the sun started to look like Pac-man. 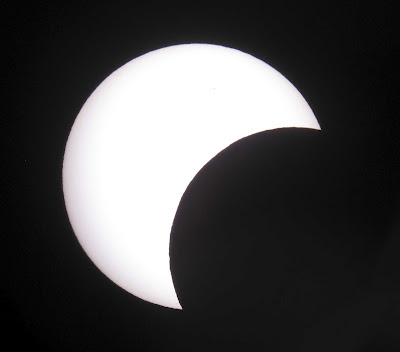 This was one of the final shots I got. At this point a bunch of the neighbor's trees were going to get in the way and I decided I got what I wanted. I could have taken the scope somewhere else and continued, but this was good enough. 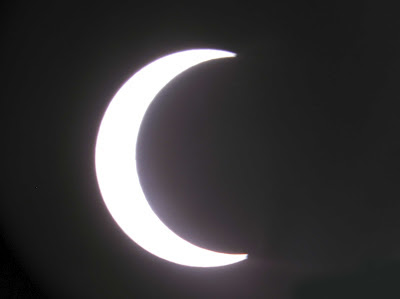 Tomorrow I will show what I did regarding the Venus transit of the sun that happened a few weeks after this.
Posted by The Great Silence at 7:42 PM