This is probably the most famous rock formation in Alabama Hills. The big protruding one is Gene Autry Rock. I have seen it a bunch of times in films. What you see below is the Autry Rock along with some of the rocks in the background. This particular movie picture is from Hopalong Cassidy's False Colors. Hopalong Cassidy is with some of his side kicks in the between the two major rock formations. 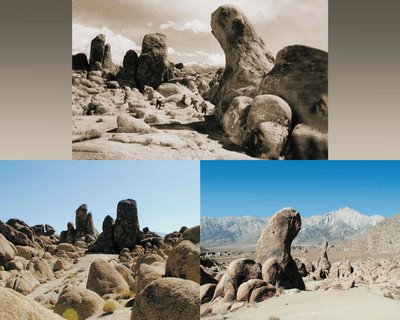 I shot the background rocks which look about right. However, the Autry Rock is shot back towards Lone Pine Peak. That is why it looks backwards in the pictures. In the following picture I added a picture from the Gene Autry movie Boots and Saddles which is why this rock was named after Gene. 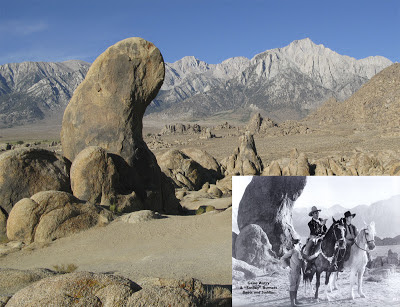 Gene Autry Rock (Vimeo Version)
Posted by The Great Silence at 11:09 AM