(GPS:  N34° 16.350 W118° 38.170)
The above GPS coordinates are right next to the bush I refer to in the last blog. From there I just looked south-east. It is the same area that the stormtroopers assault the hillside. This open area I like to refer to as "Boba Fett's Golf Course".

My picture gives more of the area: 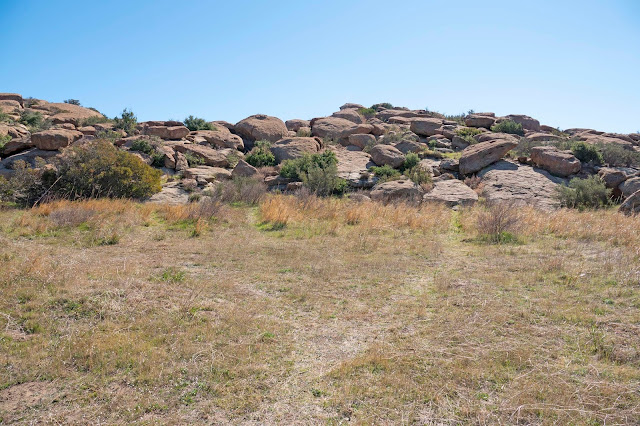 You should see that hanging rock again. It shows up quite a bit in this episode along with the other rocks. They had unarmored Boba Fett (actor Temuera Morrison) doing a lot of fighting here. I show in the video another look if you pan the camera left here.

There were some moments of this part of the episode I tried to find. I took a lot of pictures and videos wandering around all the rocks in the area. Those ended up being elusive to me. Someone will probably come along and find those spots eventually. I kind of wondered if some CGI or other rock props were used because that would have thrown me off.

Finally, I did show that wide screen shot in the video that I knew I had the right idea, but did not quite get it right. I say I could have gone higher or maybe it was an Aerial shot. My opinion now from looking at my footage and pictures is that it was an Aerial shot. I do not think you can climb higher there to get them to line up. I did want to fly my drone here, but the wind was really bad. I do not know if I will get back there anytime soon, but if the conditions are right I would try that.

Next time we go back to an open spot very close to the confrontation location.