The Confrontation (Hunting the Mandalorian Series)

In the video there is some "sleight of hand" where I actually show you the two key spots to let you know you are in the right area of where they filmed. It is during the hiking portion of the video. IMO, you do not really need GPS coordinates to find where they filmed, but I listed the one above to the confrontation area anyways. This is the easiest location to find. This blog entry and the next one will show you why; the video does it as well.

So, here is the Mandalorian hiding behind a huge rock! I took A LOT of pictures of all these areas, but the following is similar to the one I showed in the last blog entry. It is a much bigger shot of the area compared to the screenshot above. 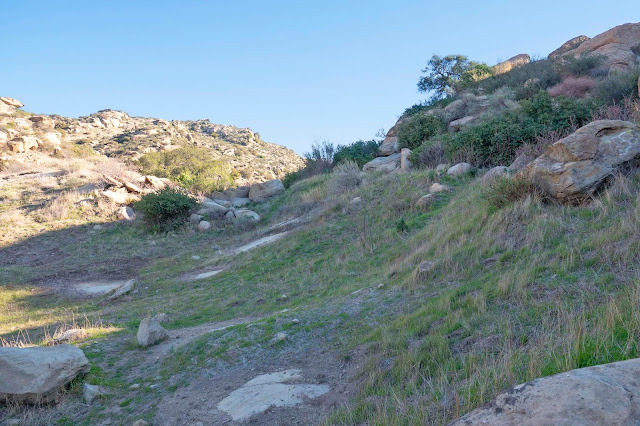 Note: I am actually standing right next to where Boba Fett was looking down on the Mandalorian. Keep that in the back of your mind for now because I will come back to this.

However, there appears to be two rocks missing! Yeah, when I watched the episode I was almost certain the one he hides behind was some sort of prop (or, as I say in the video "set piece") they brought in. Keep in mind over the years of hunting rock formations in the Alabama Hills, the Simi Valley area, and other areas movies have been made I have had to obsess over the smallest details of locations to find them. So, my own intuition from my experiences is that the rock did not really fit in here. I am talking in "the real world" sense, I am not saying they did a bad job of adding that for the episode here on a fictional planet. I thought how they used the rock prop was cool. I wish it were there because it would be a really cool photo opportunity of standing behind it. Still, we have enough here anyways so I was happy to get this shot.

The picture above is pretty close to where the unarmored Boba Fett (aka actor Temuera Morrison) was standing looking toward the Mandalorian. Let's look at the Mandalorian's perspective toward Boba now: 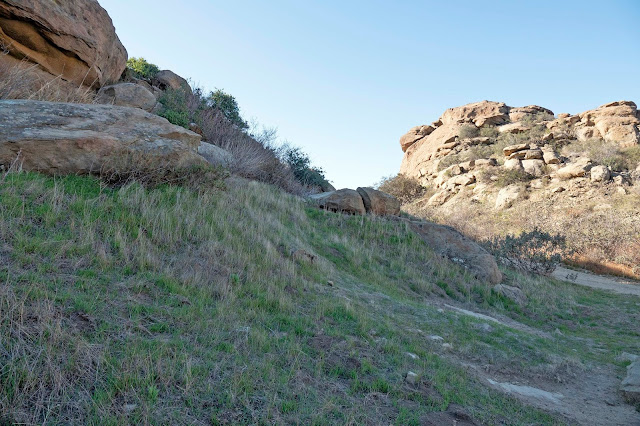 This is good enough. Btw, one of the issues I had to think about in this area is the time of morning I was here. I was also here during the end of February about a year after they filmed here. The sun does not get high enough during this time of the day. Part of the hilly cliff above on my left from this perspective blocks the rising sun. Keep in mind they filmed this scene with a lot of shadow too because of the time of year they filmed here. I did want to keep that mostly shadow look rather than have the area partly shadow and partly open to the sun. Now if I went during the summer at this time in the morning or later in the day I suspect the sun would be completely lighting up the area. Since I am trying to show you where a movie location is I was okaying with emulating the shadow on the area. If I were trying to give you a more artistic picture, then I would want a fully lit up area so I would probably wait until later in the day, or wait until the summer.

You will notice Boba is standing by the rock that looks split in two or "two split rocks" (as I say in the video). Those rocks are definitely real. Remember above when I said to keep that perspective in the back of your mind. That was where I was standing for my first picture above. I do it in the video as well.

I will show where Fennec (actress Ming-Na Wen in this picture) was above in the next blog. For now, notice they came forward. I am going to add another picture. Please note that both my pictures work for both screen shots. I am just giving a few different perspectives shots so you see different parts of the area. 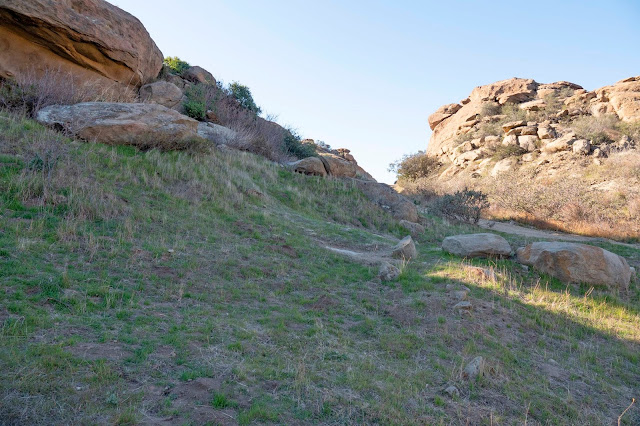 I point this out in the video, but the one thing that really makes this easy is if you are on the trail you walk right by it! Boba Fett is standing right by it! In the above pictures you can see the trail going by on the right side of the picture.

In the next blog I will show you the rock Fennec was on and why it was the key to letting me know I had found the area.