Rising From the Dead!

Normally, when I get sick it lasts about a few days to a week where I feel bad and then I need another week to fully recover. That's been my experience for most of my life because I have been blessed with pretty good health. As you might guess I keep myself in pretty good shape in order to go on the hikes I enjoy doing. Although in the past few years I have slacked off a little due to not have the same motivation. I hope to get that back starting today.

What happened to me was during the last few days of January I was out of town, and when I came back I started having strange things happen to me. I went out jogging and was really light-headed in such a way that I felt if I was not careful I might fall over. Then over the next few days my digestive system was not right. Long story short, this was something I have never encountered before and would plague me over the next two months. I usually avoid going to the doctor because of the way I usually recover from sickness, but this thing I had kept coming back like it would not go away. So, I went to the doctor. All I got out of it was a bill, a few tests, and told to get some over the counter stuff. I got to the point where I wondered if I would ever get over what I had.

It took me about a month and a half before I finally felt good again. I still had some symptoms, but at least I felt better. Another two weeks and I felt like it was finally coming to and end. I never truly understood what happened to me. One problem I had was the weather was very cool during this time. The days that it did warm up where I am out I felt better and was not coughing as much.

It's times like this that are a reminder that all it takes is one deadly sickness or a doctor telling him or her they have a life threatening disease that one realises they are not the invincible person he or she thinks they are. As far as I am, things are almost back to normal for me. The only difference is I have made some dietary changes which I think will help me getting back to the hiking shape I want to be in.

One of the issues I have is that with my new camcorder the video files edit and convert at a lot slower pace on my main computer. I can't just do what I have been doing in the past because as it was it converted slow, but this is much worse. So, sometime this year I hope to get a faster computer. This is one of the big issues that I had that led to me wanting to get away from the computer and blogging because I was spending too much time behind a computer screen.

With that said, I do have some projects in the works. Although I have not done too much in the past few months, but as we get to the summer that might change. Good grief! Have you seen the gas prices?! ;)

Earlier today I was back at the Ramona Bowl. Each year on Easter the local Calvary Chapel in Hemet puts on an Easter pageant. They called this one More Than a Man. I had never been to it before so I decided to show up and watch it. A lot of singing was involved. The way they did it the main characters of the story were Nicodemus and Joseph of Arimathea in that they had the most speaking parts in their coming to terms as to what Jesus was/is.

Jesus and some of his followers: 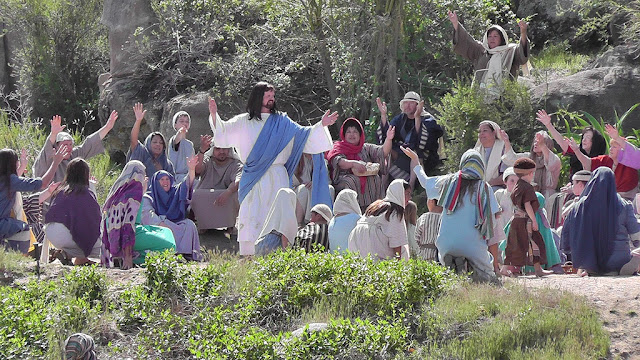 They use the hillside for the Crucifixion. Most of the people you see are singing. The small group in the background are grieving: 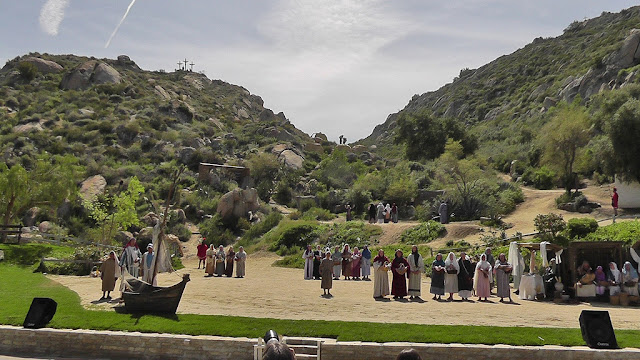 Finally, after what appears to be an earthquake, an angel appears who scares the Roman guards away. The angel tells the women who come to the tomb that Jesus has risen: 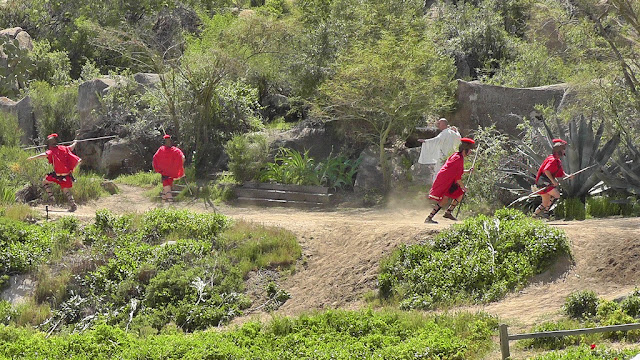 So, just thought you all deserved an update on what has been going on. As I once heard said in a Monty Python movie, "I'm not dead yet! I'm getting better!" ;)
Posted by The Great Silence at 8:09 PM