Continuing from the last blog...

"The pack that walks like a man." Norman carried a very big backpack. 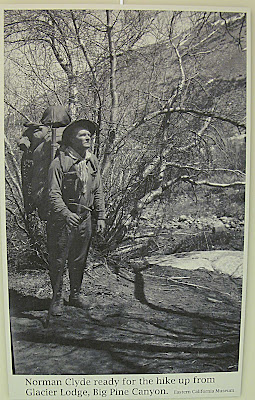 This is one of his pictures of that he took of one of his mountain climbing partners. 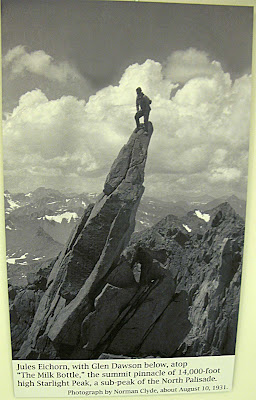 Norman was always first choice for search and rescue back then. His search and find of Pete Starr's body in 1933 is sad, but legendary at the same time. This picture refers to a crash site he was asked to find. 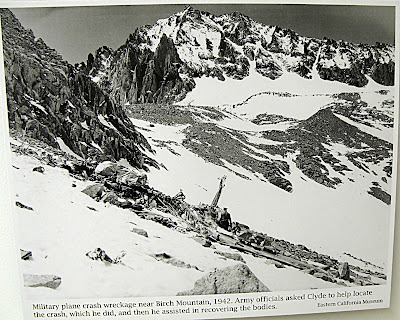 Finally, I thought this summit registry that the Sierra Club put on Mt. Langley was nice to see since I was on top of Langley a few years ago and all they had was an ammo can. If you double click the picture you can read a little of the history about the registries. 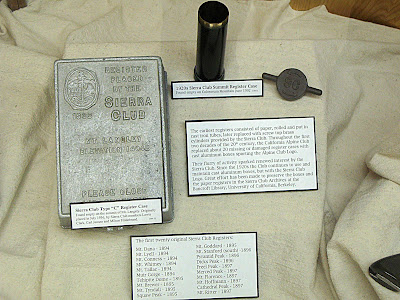 As I wrap this one up I thought I would mention how Norman Clyde was fired from the Sierra Club. I get the idea that Norman was a guy that expected to have competent people on his climbs and only put up with so much with what he perceived as idiots. He was leading a group to a certain peak and one of the clumsy hikers with them fell and broke his pelvis and also had a severe gash on his head. Apparently, this could have been avoided by setting up a rope over the passage. A stretcher was brought in for the injured man, but when Norman and the others came back to camp they decided to fire him from the club. What mountain was that trip done on?
Why, my logo picture at the top of the blog!
My video of the exhibit:

For more on his life:

Close Ups of the High Sierra by Norman Clyde
Posted by The Great Silence at 8:45 AM

The Eastern California Museum in Independence, CA had an exhibit dedicated to the life of Norman Clyde last year. On my way home I decided to stop by and check it out. I had been there a few years ago when they had an exhibit on the Russian Gulog. This was something that did interest me since Norman Clyde is famous for his 1st ascents on many Sierra mountains. 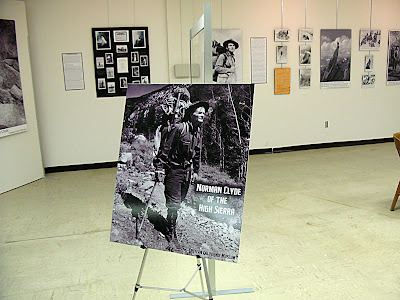 The following board shows some about his wife and their marriage license. If my memory serves, she was a nurse who ended up getting t.b. herself and died a few years after her marriage. This event is what made Norman Clyde move to the Eastern Sierra in order to become a principal at the high school there. 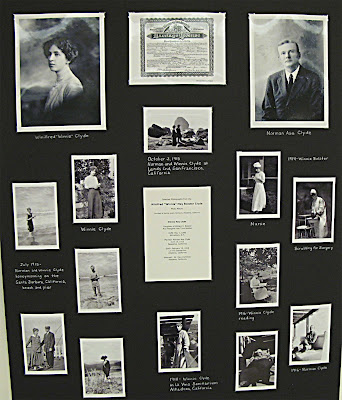 This pictures shows a few of his possessions. While mountain geer is expected, the books are interesting to me in that he was really into the classics. Apparently, while not out climbing would spend a lot of time reading the ancients. 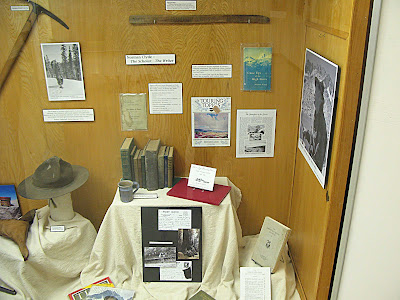 This slab of wood I found interesting. On the first climb up Whitney's East Face, Norman and his hiking friends found this piece of wood. It says, "William Knutson Sept 4 91(?) Tiptop." One wonders if they were truly the first ones to ascend on that route, but in any case I think it is cool find for 1931. You may want to double click this picture:

Here is a gun he owned. The story is that a bunch of local teenagers tried to pull a prank on Halloween night at the high school. Norman was at the school and pulled his gun. After shooting a some shots in the air this incident led to his resigning (or fired) as principal. From what I have read, he was not really a guy who was living up to the communities expectations as an educator because he was always taking off on weekends to do his climbs rather than go to the local community functions. So, this was another incident that forced him to isolate and focus more on climbing.

His hat. He had that kind of Indiana Jones thing going for him. 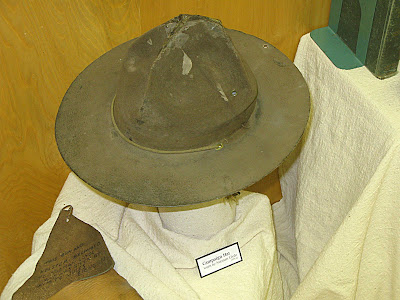 I will continue this in the next blog. I tried to do a video of this exhibit. Although you cannot really tell from what I used as video, there were people around. So, I had to kind of move quickly at some points to avoid being annoying to others trying to look at the pictures and artifacts. If you do see something you want to look at or try to read some of the panels then I really suggest you pause the video.

Posted by The Great Silence at 6:17 PM

Okay, lots of stuff to mention here, so let's get going.

First, today is the anniversary of the death of Morgan Earp. I decided it was time to upload a new version of the gravesite location. I went back and made a few changes to the old blog as well:

Second, I uploaded a bunch of new videos and blogs in the past few days. This is to catch up with everything that should have been up during the past month. Long story short, my internet provider had to send out a tech guy three separate times due to a low signal on my connection. I was able to use my connection during the morning for a few hours, but by late afternoon it was really bad. Everything is fine now so I should be able to be more consistent and have something up almost once every week or two for a while.

Three, I was reminded of a comment I made to Alex in one of the last blogs I did about mountain climbing recently. I did some really cool local hikes over the past two weeks that I will probably talk about in a few months time. They have a different type of danger to them than the mountain climbs, but the last one I did, after all the danger was over, I ended up kicking a rock and falling over on flat ground. Luckly, I did not fall on my camera's as bad as I thought I did. My gps and walking stick went flying, but no major damage. Lol! The hikes were really cool because, even though they are near the city, they are really remote due to lack of trails. It was more of a bushwack "jungle" adventure for me. I think you will like them when I eventually get to them because the final reward on each of them is really cool.

Fourth, my brother called last night and told me to turn on the television. Oh boy! I saw one of the worst documentaries last night on t.v. It almost makes a mockery of everything I try to do on here. No, it really had nothing to do with me, but it really felt like it since I was very nearby while they were filming it. I recorded the thing and will rip it to shreds on here at the beginning of next month.

Alright, I think that covers about everything I wanted to say. I be going through the recent blogs this weekend and making any changes that are needed. If any of the links are not working, then I will take care of them at that time.
Posted by The Great Silence at 3:28 PM

In the last blog there was a tree in the way that I pointed out. You can see part of that on the left in this next picture. The reason I am showing this picture is to show the maintenance road on the right. 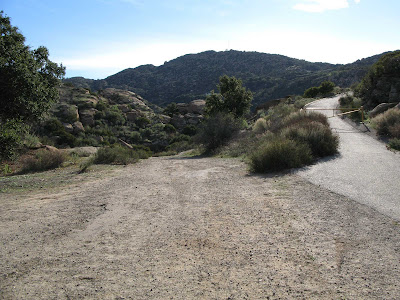 You can see Shirley Temple looking at the people driving horses back and forth. That maintenance road is in the background. The picture above is not the same area as the one below. 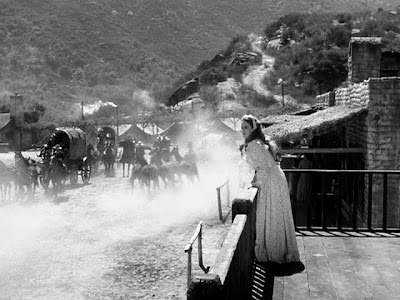 From what I can tell, this is closer to the perspective of the camera taking the shot above. The tree throws it off a bit because you can not see the maintenance road very well. That sign shows you that these set houses were on this side. 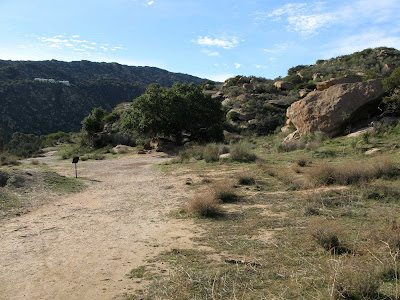 There is a scene at the beginning that John Wayne rides to this house Shirley Temple was at. 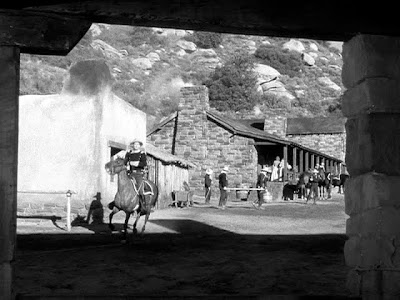 The mounds, the overgrowth, but I think this is close enough. I should have circled the rocks I am keying on in these pictures, but I think you can figure it out. In the above picture it is the set of rocks next to the bush next to the chimney. In my picture look to the upper middle right side. 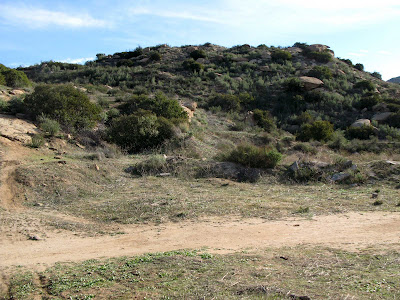 You can see why I consider this area a bit frustrating. I am close in all of these, but not as close as I would like to be due to all the changes over the years. Fires pretty much destroyed all the structures at Corriganville decades ago, but this gives you an idea of where things once were here.

I always thought filming at an area like this was ancient history. My surprise was that I saw it used in a tv show recently. I mentioned my shock of seeing it in this blog I did a while back. If I do go back soon I want to figure out the details of what they did in that Bones episode.

(GPS: N34 15.980 w118 39.295)
I will post the video below. As I mention in it, this one was a long time in coming. I should have had this one up years ago. The problem was I always arrived too early in the morning with bad lighting, or poor weather conditions with too much wind. I am sort of satisified at the moment with what I have, but if I feel differently someday I will go back. I am thinking of going back eventually for another reason which I will mention again at the end of the next blog.

Any movie or tv show that needed a fort to be shown would more than likely use this place. I have seen Fort Apache used in tons of old stuff. Here is a picture used in Fort Apache when the new troops march in front of John Wayne and Henry Fonda: 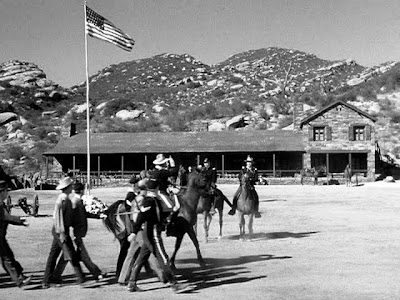 I showed this picture once before. The angle is quite right, but I usually take a picture here because the plaque they have is right here. Of course, the set is long gone and the area is not so flat anymore. There is a huge mound out in the middle. 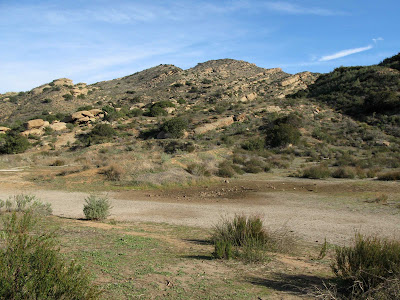 There is another scene where the new troops are in training. 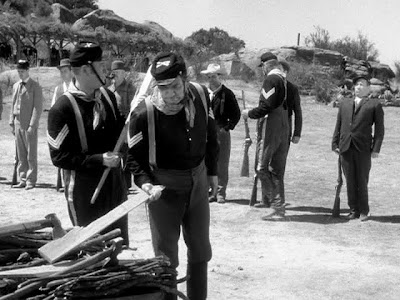 I moved out to where the dirt road is in the above picture. Then I turned around. This picture is close. Some of the rocks in the background were key; I point those out in the video. Notice the tree. lol! Yeah, those rocks were helpful too and that is what you are seeing on the right side in the above picture, but the tree kind of messes thing up a bit. 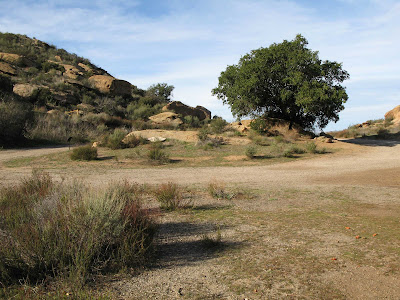 At the very end of the movie you the troops all prepare for what will be the big battle scene. 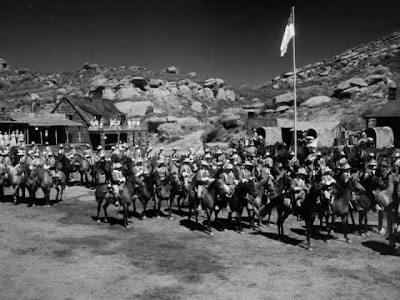 The flag pole above marks the right side of my picture. You should be able to line of some of the rocks in the background. 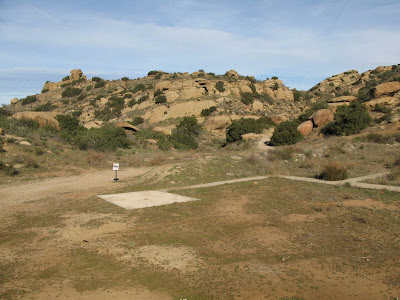 I will continue this one in the next blog. You can check out the video I made for it in the meantime:

Here is a quick one. Clayton Moore, in Adventures of Frank and Jesse James are given a landmark to look for. The rock formation known as Saddlehorn Rock. 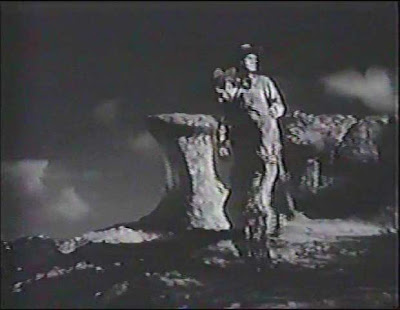 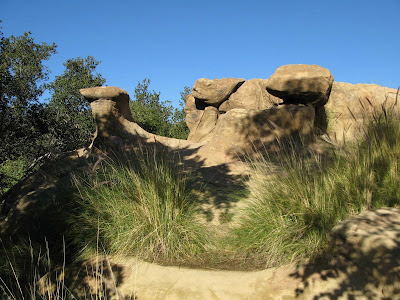 The video will help you realize where it is if you have seen my other recent Iverson Ranch video.