The last Christmas present my mother got me back in 2018 was a toy drone. I have used it a few times in 2019. I will probably show some video from it at times, but want to keep those short since unless you are really into that it can be a bit boring the way I do it. Here is a screenshot of Tioga Lake with the drone near the Yosemite border (can't fly in national parks). 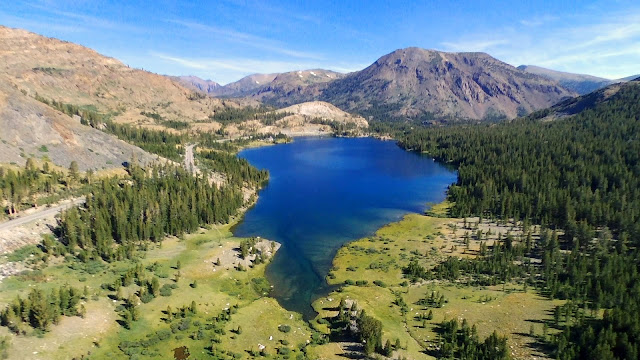 I'm slowly getting back into the swing of things, but I will probably need another month or two before I upload some new content. I have too many other things going on right now.

One thing I wanted to say about the Eastern Sierra is that it is largely seasonal: late spring, mostly summer, and a little bit of fall. That is for most people. If you are into skiing that is not really what I am talking about. I had a family drive by as I was walking about two months ago asking why a certain restaurant was not open. They were surprised since people fish and hunt, etc. I had to explain that fishing season was over, it is a seasonal area, and we were getting to the point that this particular area will be snowed in for many months.

No matter what time of the year your travels just try to be aware of where you going. Have a little knowledge before hand especially it if is an isolated area. Let others know where you are going and an approximate time frame of your activities. It is going to happen that we hear another story about someone who traveled somewhere and goes missing. Nature doesn't play by the rules we think it does.
Posted by The Great Silence at 8:00 AM