The Death of the Red Baron (100th Anniversary)

(AKA A Ghostrider in the Sky)

I wanted to make a note that today April 21, 2018 is the 100th anniversary of the shooting down and death of Manfred Baron von Richthofen. Who is better known as the Red Baron ace of WW1. I'm not an expert on his life so it is probably better to link to his wikipedia entry, and you can google away his name since there is tons of information out there. I should note he had 80 victories for Germany during the war. It is believed that he was not shot down by another pilot, but shot down by Australian Sergeant Popkin underneath him on the ground firing his vickers gun at him.
My little tribute to him will consist of pictures of the Fokker Dr. I (Dridecker or Triplane) which is the type of plane he made famous and was also shot down in. It wasn't the only plane he flew, but any depiction of him in popular lore will have him with this plane. I took these at the Planes of Fame museum in Chino. 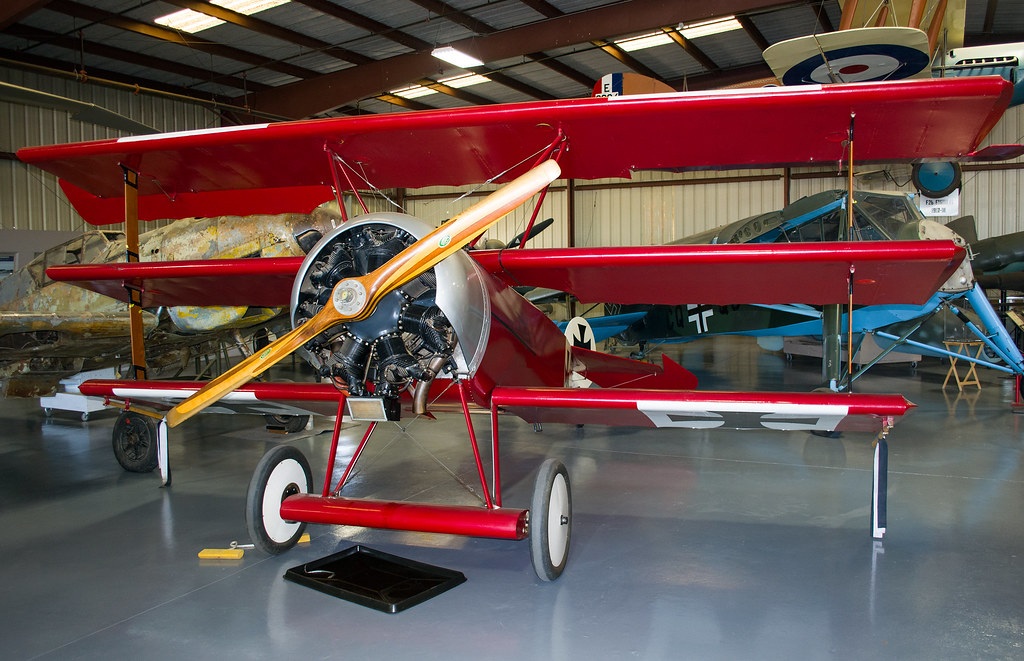 One thing that is interesting about this historical period for readers of this blog is we are transitioning away from the 100th anniversaries of Western Anericana (Gunfighters, Outlaws, etc.). While I consider most of what we would refer to as the "old west" ending around the 1890's, a case can be made that it extended to the years right before WW1 in certain regions. Those regions were still using horses as a primary means of travel. There were automobiles, but not everyone owned one or had roads to drive them. Some towns were isolated, maybe not as much as 30 years prior, but isolated enough that they still had to protect themselves and property from those who would take it. For example, it was only about nine years ago that I had a 100th anniversary blog about the hanging of Jim Miller. 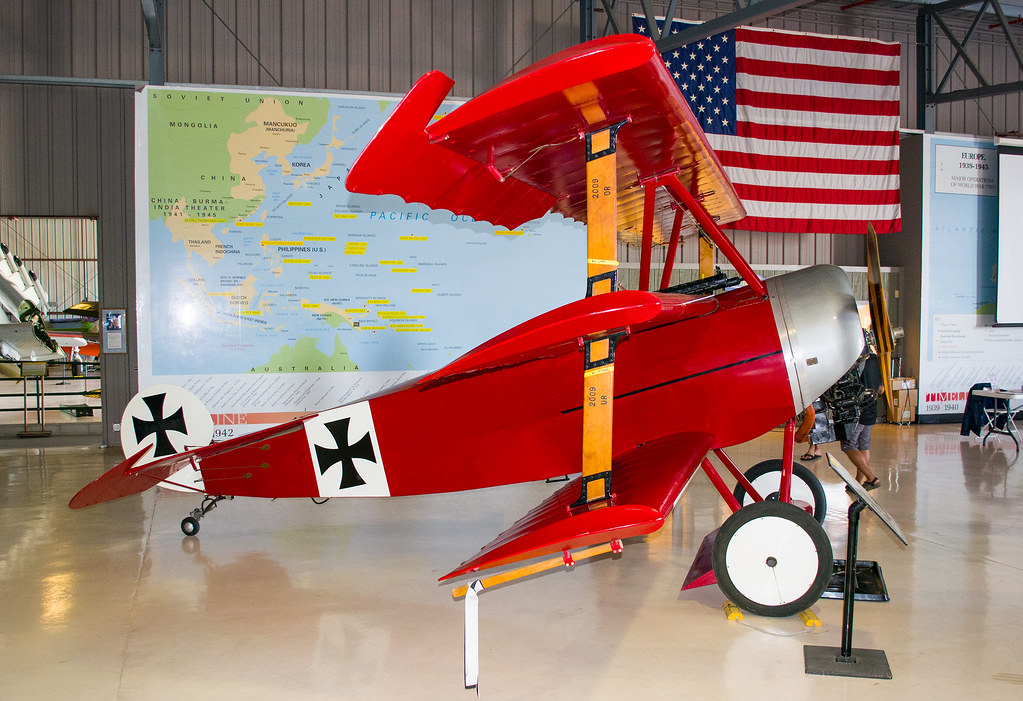 So, that period of the old west was only a few years before what would become military industrial complex that is still with us today. WW1 would bring about the notion of total war where every member of society is connected to war and military in some way. 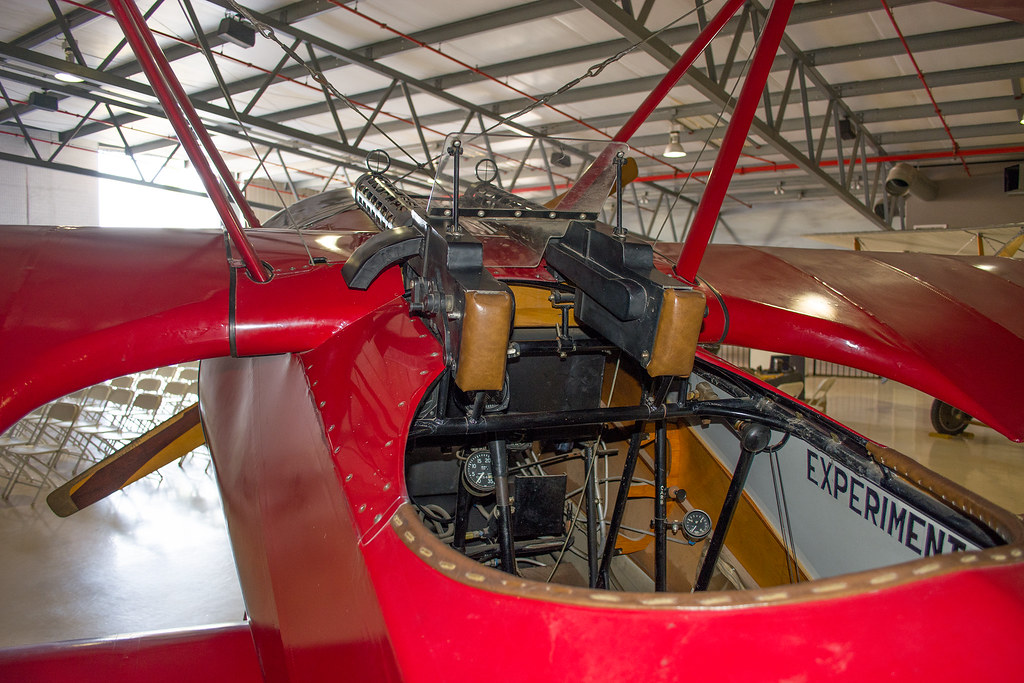 So back to the Red Baron, he was admired for his skill as one of the first fighter pilots. In a sense, the fascination with him that some have had is like the gunfighters of the old west. He was a pioneer and somewhat of a cowboy/gunfighter in the sky. Not on a horse, but on a new strange flying machine. 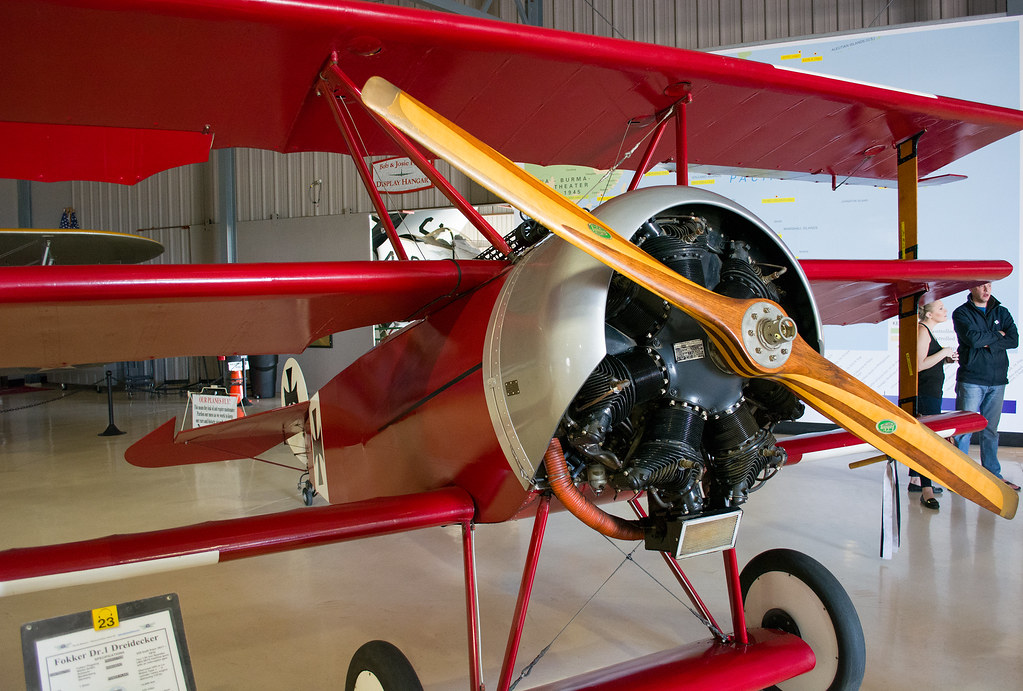 A few years ago I saw a poll that said most people in Germany do not know who this person was anymore. I think some said that the name Red Baron had to do with a pizza brand. ;) He has been forgotten. There are some good reasons why that is probably the case since Germany seems to not want to glorify those who fought in two wars that most consider them responsible for. On the other hand, many in America probably only know him as being Snoopy the dog's eternal enemy in the Peanuts comics/cartoons. In any case, I thought I would bring your attention to this person who was famous for his time period.

WW1 Aircraft (My blog from last year)
Posted by The Great Silence at 11:09 AM

Lundy Lake to the May Lundy Mining Settlement

Happy Easter and April Fools Day! Which is kind of a weird thing to have together. I was going to call this blog, "Investigating the remains of May Lundy," but then I might get responses like, "What happened to her? I didn't even know she was sick?" Then the joke would be on me. In any case, this is the first blog of the year, so let's get to it:

Last July my brother and I went back to the May Lundy mining settlement in Lake Canyon. We had done this before some eight years back, but I never blogged about it on here. I hinted at it in another blog entry, but never came through with any blog entry about it. So, after last summer with new pictures and updated video clips, here we go... 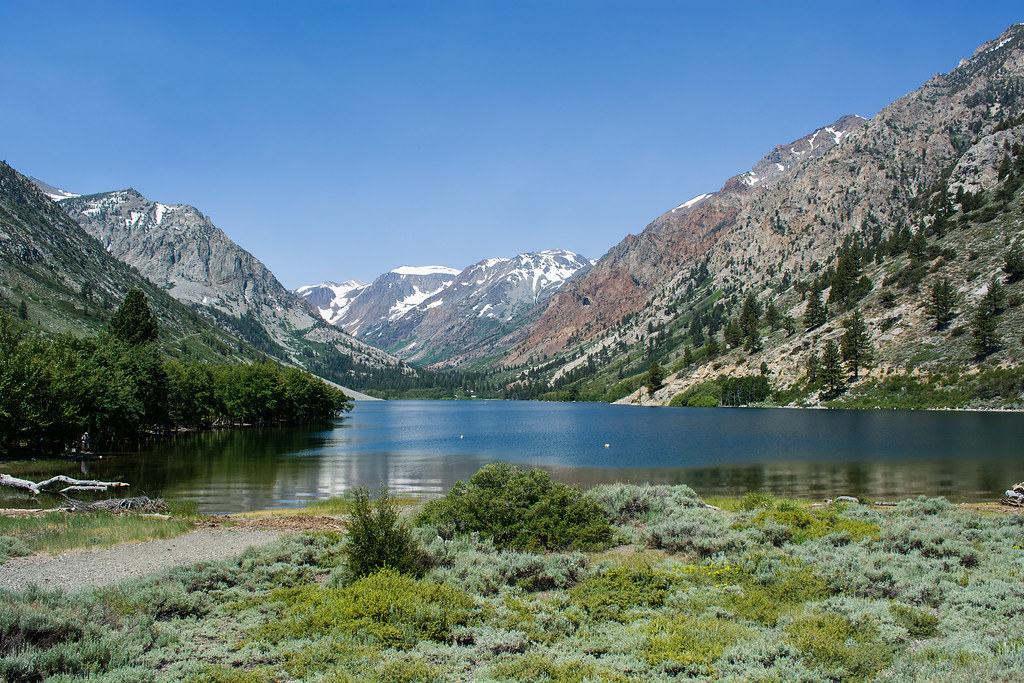 We started out at Lundy Lake. On the other side of the lake, back in that canyon is where I like to go for fall colors in October. I've shown that on here before. This time we will headed to the left side of this picture and up. 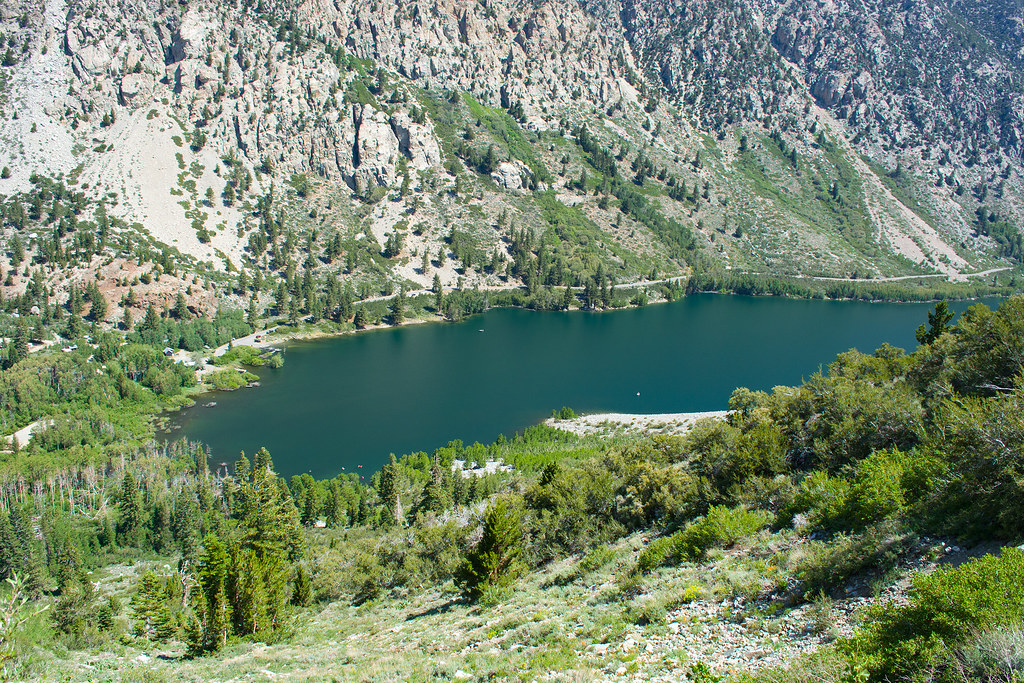 Looking back down you can see how far the trail takes you. Actually, this is an old mining road that one can imagine small wagons, horses, and equipment being brought up this trail.

Turning around (doing a 180) from this picture, we headed up and back into the canyon. Much of the trail at this point was walking through water and ice. Many parts of the trail seemed like walking in a stream due to the melted ice. 2017 was a good year for snowfall.

Along the road we started to see traces of human artifacts. There are many along the way. Eventually, we encountered two vats along with some walls. Then I caught up with my brother at an overlook of the remains of the mining settlement. This is very close to where the GPS coordinates above will get you. 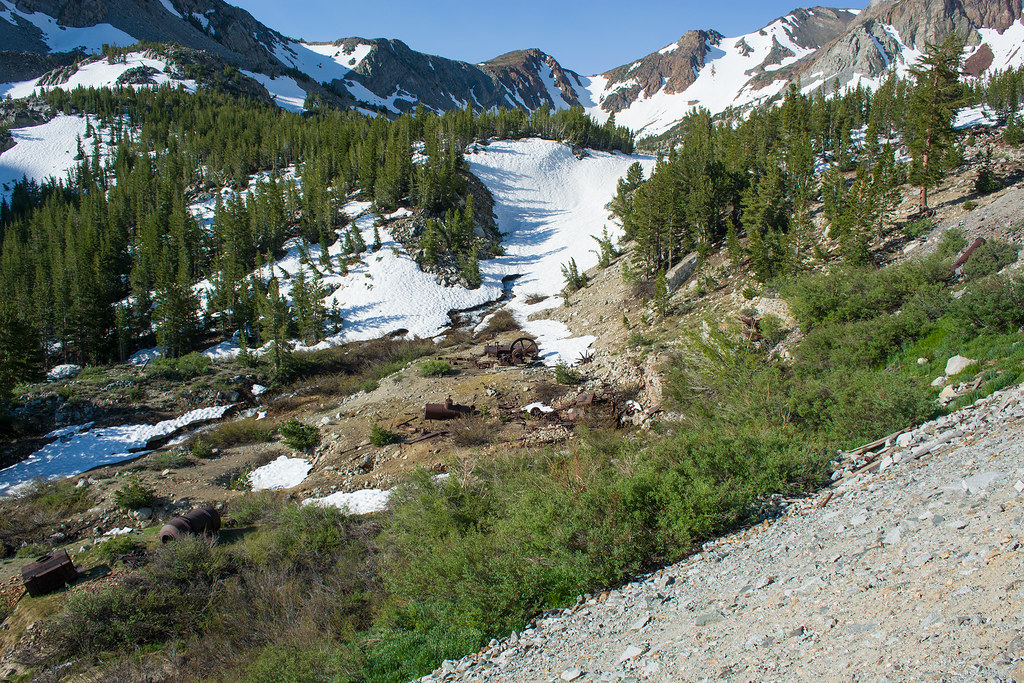 Below is where we spent most of our time. You can see a bunch of the mining equipment remains down below. This was where the May Lundy Mill was at. To the right and looking up the mountainside is this: 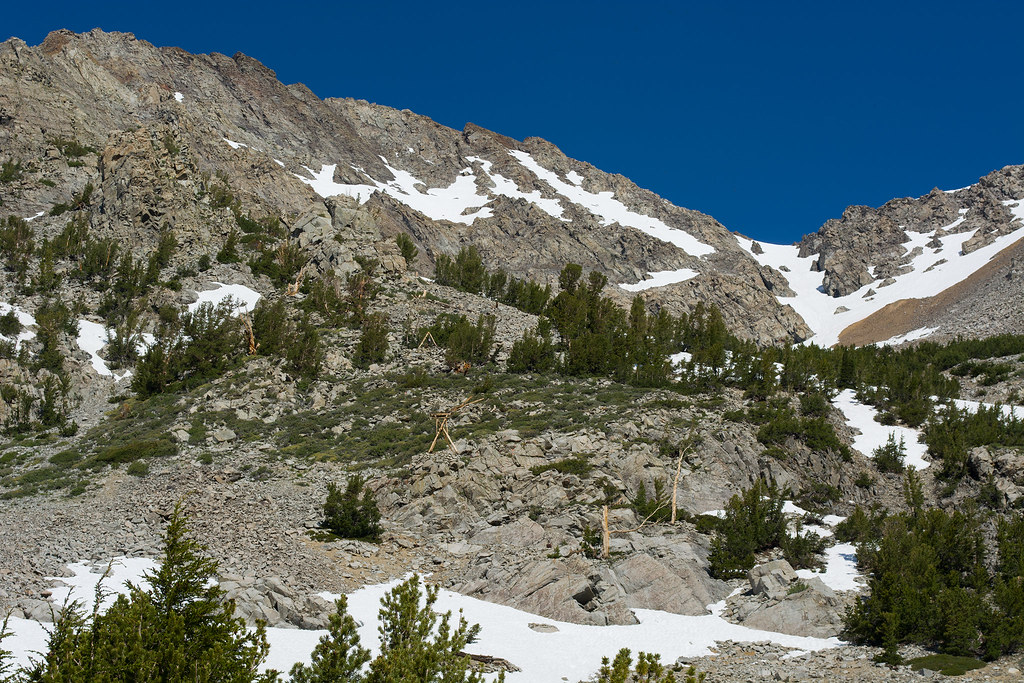 The May Lundy mine is up there. If you look closely in that picture you can see the frames that were part of the tramway that would come down the slope to the mill. 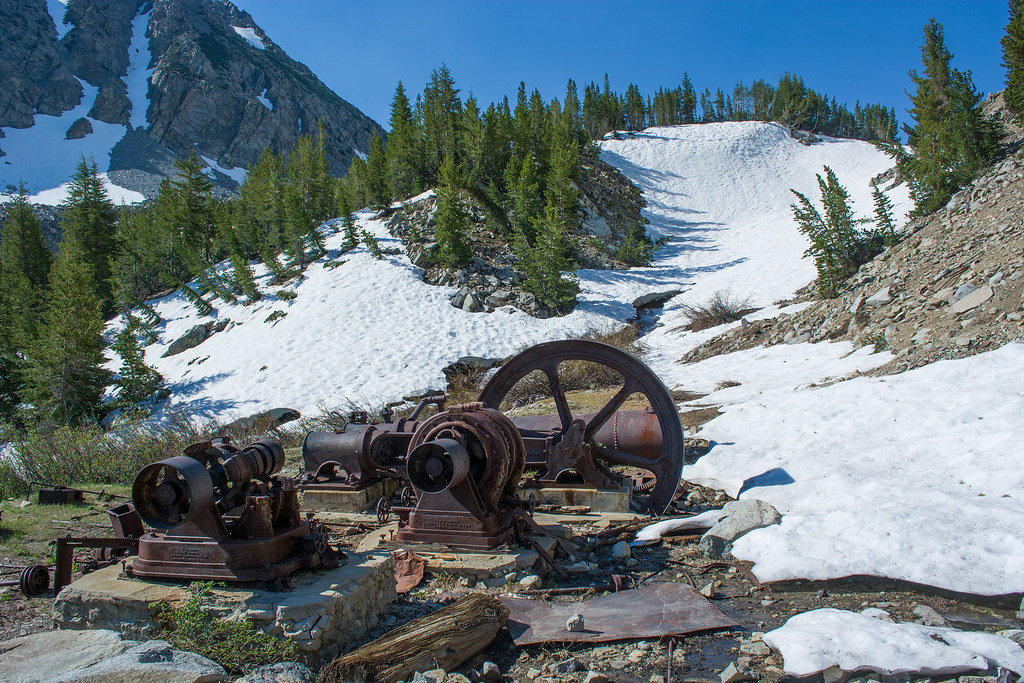 You can see some of the mining machinery here. Basically, this area was mined from 1880-1914 with a few revivals going into the early 1940's. 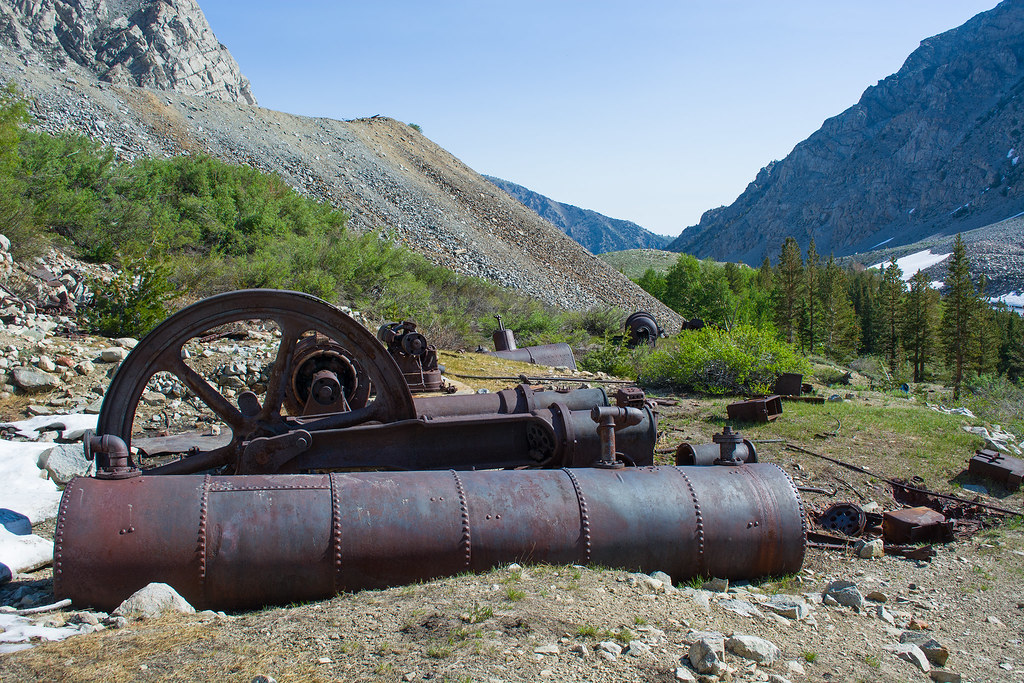 And more. To keep this blog short, I will link to my the rest of the pictures I uploaded on Flickr down below to show the rest of the machinery as well as some of the remaining buildings. The Youtube video will be linked too that shows more as well. 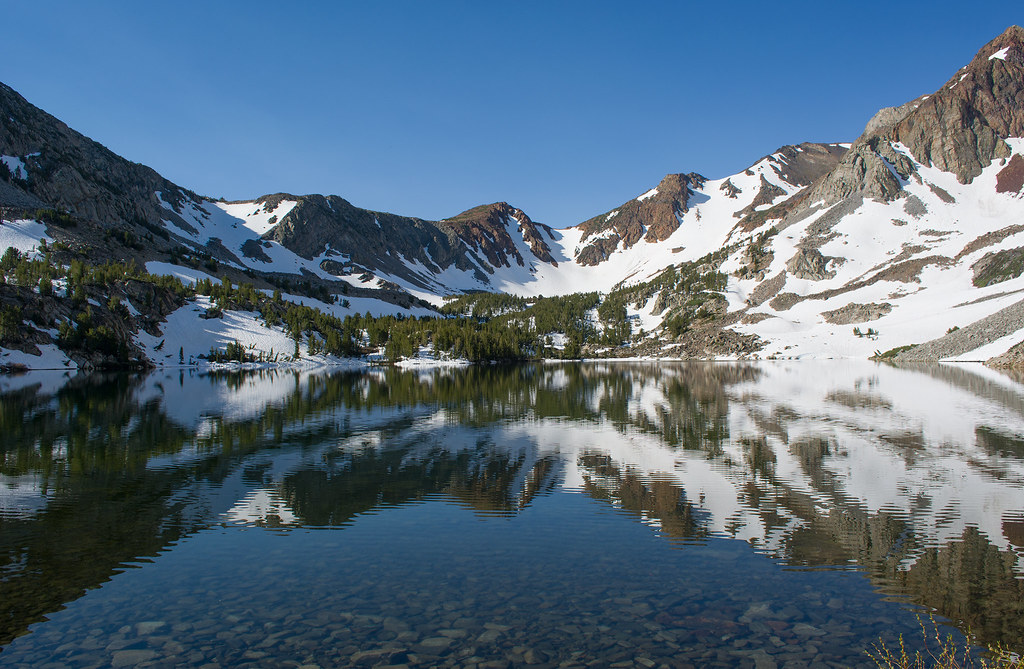 After we finished looking around we visited Oneida Lake a little further in the canyon. We then turned around, spent a little more time looking around the mining area, then headed back down.

Here are the links you will want for a lot more than I presented here:

To the Remains of May Lundy Mining Settlement (Youtube Video)

Lundy Lake to the May Lundy Mining Settlement (Flickr Pictures)

Lundy: Gem of the Eastern Sierra by Jim Hanna (Not on amazon from what I can see. Somewhat rare. Google it.)

The music from Incompetch.com used for the video is called, Concentration, which can be found HERE.
Posted by The Great Silence at 9:18 AM