Time to wrap this one up. After the Hoover Lakes we continued up the trail back and forth. Eventually we ran into this worn down sign that splits the trail: 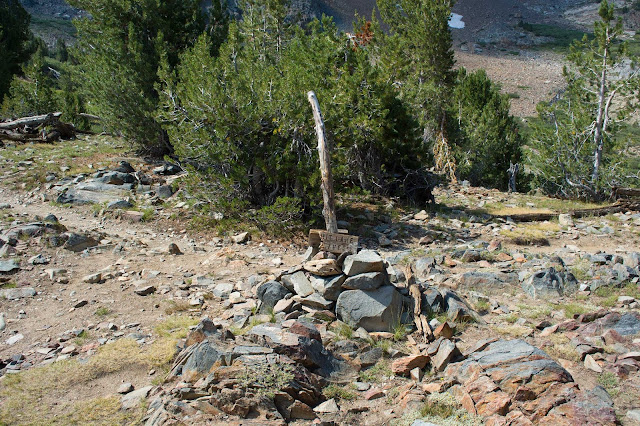 If we wanted to hike back up to Virginia Lakes we would take the trail left. It is a serious climb back in that direction if someone has ideas of doing that. Our goal was Summit Lake so off we went straight ahead. 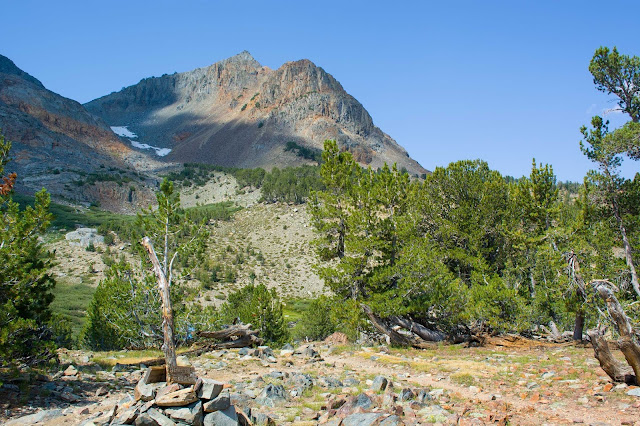 There is actually a nice little meadow here that the water that falls from both the Virginia Lakes trail direction and Summit Lake that drains into all the previous lakes I have shown. Unfortunately, I did not get any good pictures or videos of this area. Have you have seen the Miner's tale ("All Gold Canyon") in The Ballad of Buster Scruggs anthology movie? I highly recommend the movie, but it really reminded me of this area along with a few others I have been to when I saw it.

In any case, we dipped down into the meadow with a crossfire of all the streams coming in. Then we hiked up the trail's final ascent to the lake. There was the destination I had both seen from a distance on the trail from Virginia Lakes and on maps over a few decades. Summit Lake! 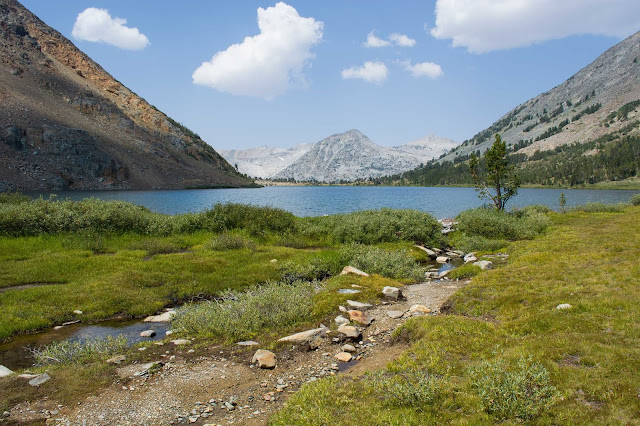 My brother and I walked up to the lake and remarked on the beauty if it. At this point the clouds kicked in giving the area an overcast look to it. The smoke was not too bad here. I mentioned how I would like to be here in February/March just to see what it was like. My brother just said everything would be only white. Yeah, with this years snowfall it is probably just a winter wonderland of cold snow and ice. 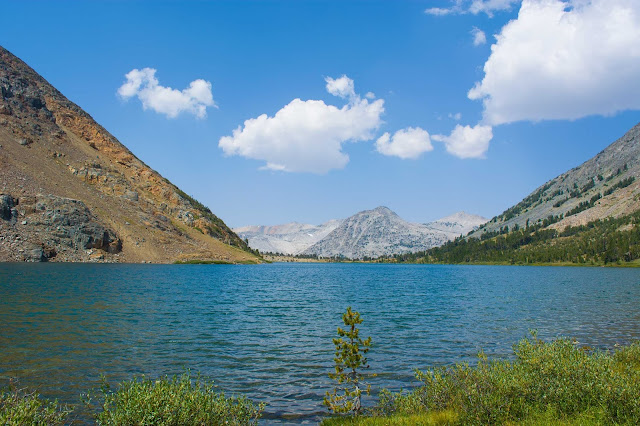 I decided to walk around the lake for a few reasons. One I just wanted to see what the other side of the lake was like. 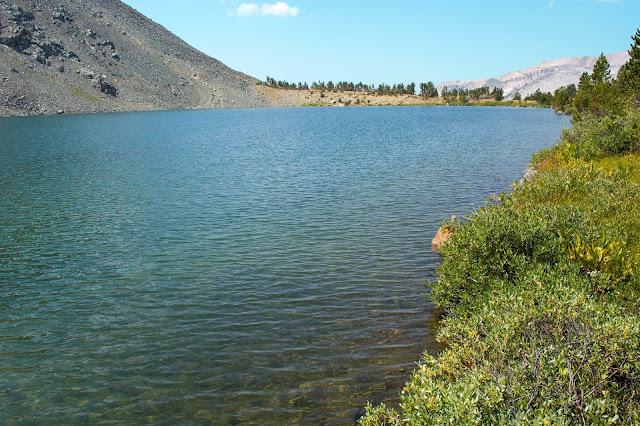 Glad that is not a volcano! Lol! 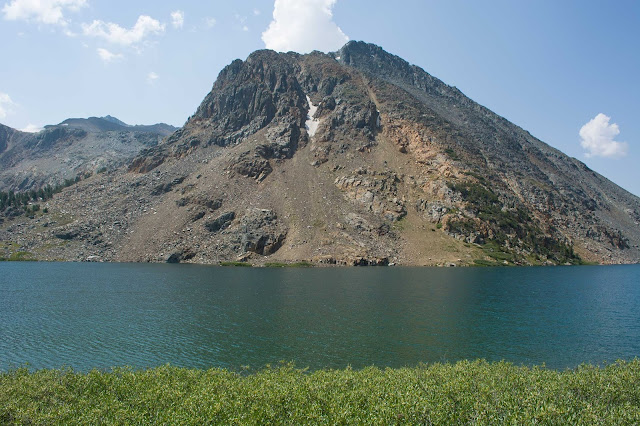 I reached the other side and looked back. 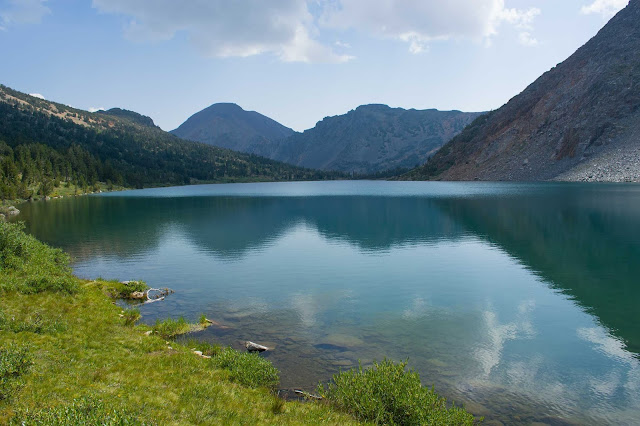 I show it in the video, but I walked a little further because I wanted to say that I entered Yosemite from this direction. Yes, the border of Yosemite is at the end of this lake. There is a sign and marker showing that it is the border.

The interesting thing about this hike is I mentioned that the clouds were slowing moving in to make it more overcast. As we headed back it continued to be like this until it started to get really dark. Then about the time I reached Green Lake the rain drops were coming down.

Keep in mind firefighters were still dealing with fires in Yosemite and other areas. I would say about the time I was near the final twenty minutes of the hike back to the truck it just started pouring. I was trying to keep my cameras dry in my backpack. I waited under a tree for about ten minutes hoping that the rain would pass. I got tired of waiting and raced back to the truck where my brother was waiting.

Once we started driving away and got closer to HWY 395 the rain stopped. If only the rain that was there would have hit those fire spots. In any case, a few days later I think the worst was over with the fires and they were in complete control.

Overall, a fun hike. One doesn't need to go all the way to Summit Lake and back in a day to enjoy it. I wouldn't mind starting at Virginia Lakes, then descending to Summit Lake, and then coming out at the Green Creek Trail head as a day hike. It would take some coordinating with a few cars, but can be done.

Music used from Incompetech is called Vulcan and For Originz.
Posted by The Great Silence at 8:00 AM

(GPS: N38 03.270 W119 17.470)
Continuing from the last blog, we followed the trail and eventually were looking over another lake. This was Gilman Lake. While we could have descended down to it we decided to stay on the trail and keep going. Somewhere here we had to cross over the stream that was running down to it. The following is past that stream and looking back on Gilman lake: 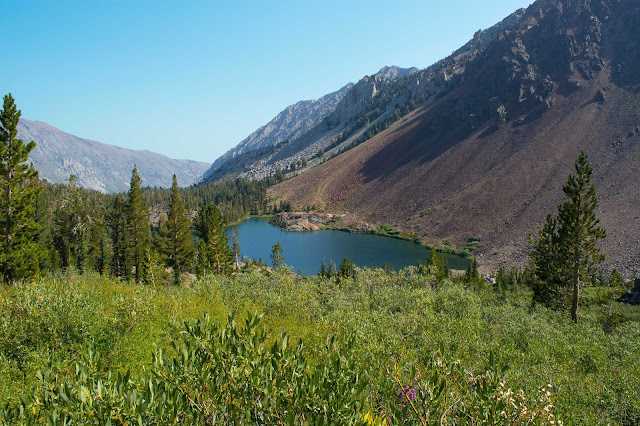 Not sure where we were going, but the trail kept switch backing and moving us a little higher. 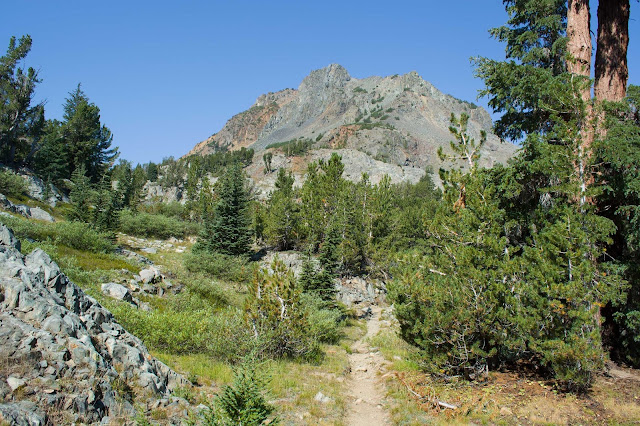 Mysteriously, things started to get a little more rocky. Then this lake showed up! This is the first of the two Hoover Lakes. I had seen these lakes before up high on the trail that starts at Virginia Lakes. I was looking down on them and saw a few people hiking along. So it was great to finally see these lakes up close. 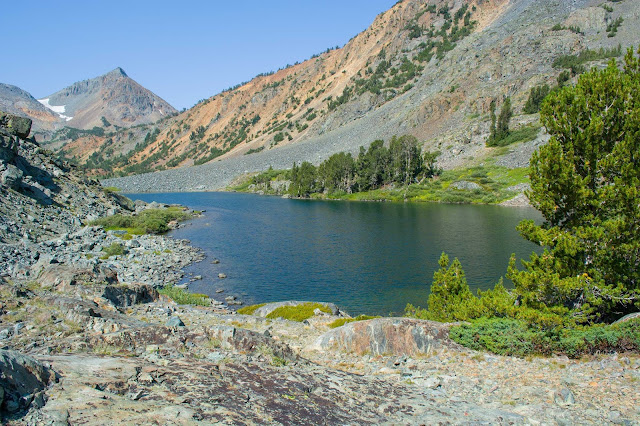 This is still the first Hoover Lake. I'm looking back at where I came from. 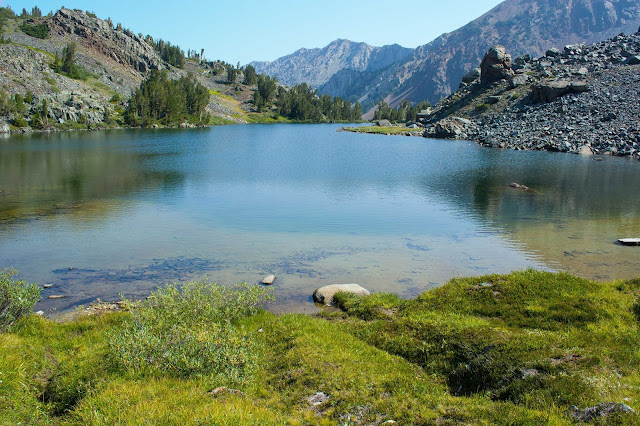 I turned around. Walked around the now rocky trail that went along the other side of Hoover Lakes. This is looking at the second Hoover lake and in the direction I would be going: 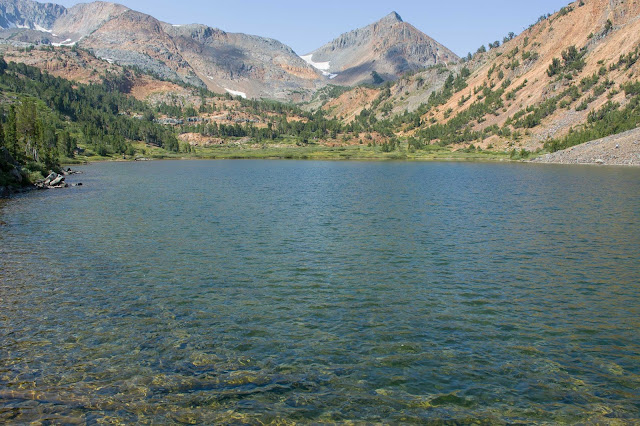 This is looking back at the Hoover lakes: 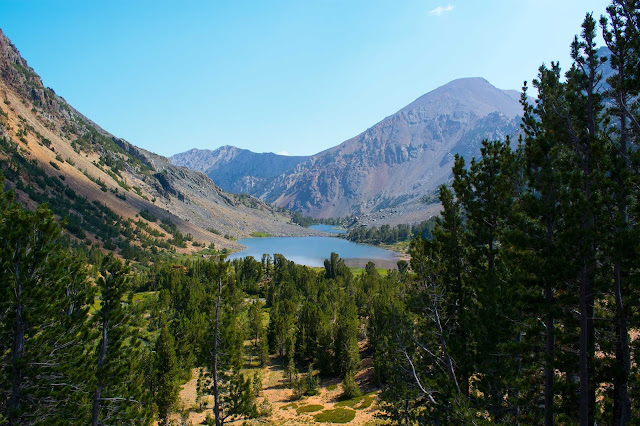 It was somewhere near the end of the Hoover Lake #2 that I found my brother looking at his cell phone. I was wondering if he was trying to get reception, but he told me that he was just looking at the gps map function. He then told me that it was not really that far to Summit Lake. My response was, "Cool! Then lets do it!"

I'll conclude this in the next blog about Summit Lake and the end of the hike.
Posted by The Great Silence at 9:00 AM

This was another hike I did last summer. I had been on this trail a few times before, but it was always too early in the season, and I was stopped by snow each time. This time I did it in August, and I went much further that most people would go for a single day hike. Usually, to get that far back into the high country you want to backpack and spend the night. There was actually a lot more to this day than I can show in pictures and video, but I will try.

This wasn't my first choice hike, but due to the fire and smoke conditions it was another good alternative. I had seen the route on maps for years. In fact, I had seen the final destination from a far a few times. We will get to that.

The drive in on the dirt road takes a while, but eventually one ends up near the gps points above. With that my brother and I took the trail. The first thirty minutes or so is passing the camping area and then the trail combines with a driving road. Somewhere during the first hour I could hear a bear groaning just off the trail to my right. My brother, who was a few hundred feet ahead of me, verified that he heard the same thing that morning. It was actually kind of creepy. I had experienced that once before on a Thanksgiving Day in the back country. I've talked about black bears before on here, but you just wonder what could be lying around a corner ready to ambush.

So, about an hour and half into the hike we encountered Green Lake: 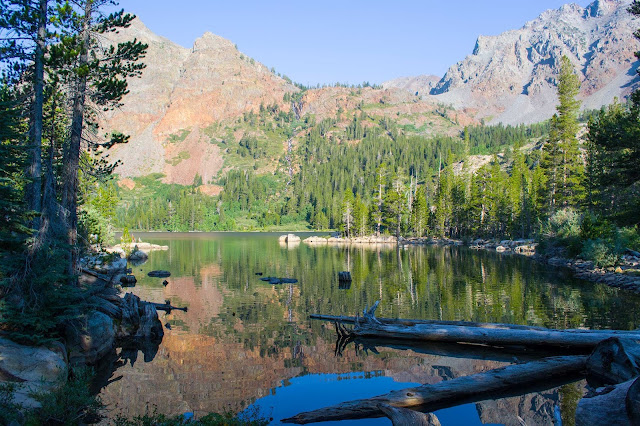 I had been to Green Lake once before. It was here I had to turn around because the snow was just too much on a July 4th weekend years back. Before you get here there is a split in the trail. If you go to the right side of the trail you would head to West Lake. I think West Lake is where the falls are coming down from in the background. If I can ever get back there then I will go to West Lake, but for for what we intended to do we stayed on the trail that was heading left.

After we took a few moments at Green Lake we had to look for the trail to our next destination. We were not quite sure which way to go here, but we eventually decided to follow the switch backing trail. We crossed a few streams. Within about another twenty to thirty minutes it flattened out for us. 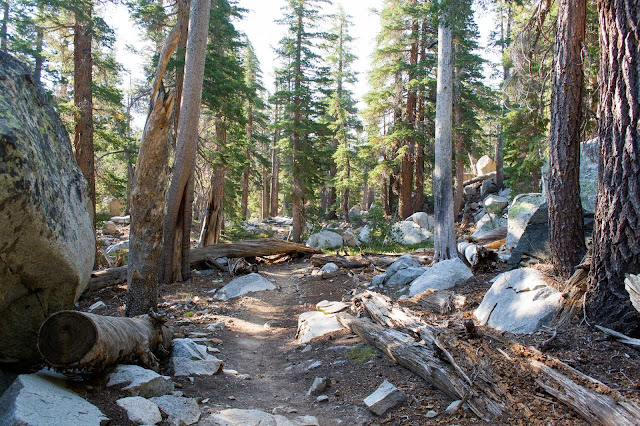 Not too long after that we started to see some people around East Lake. Most of the people we saw that day were camping around this lake. 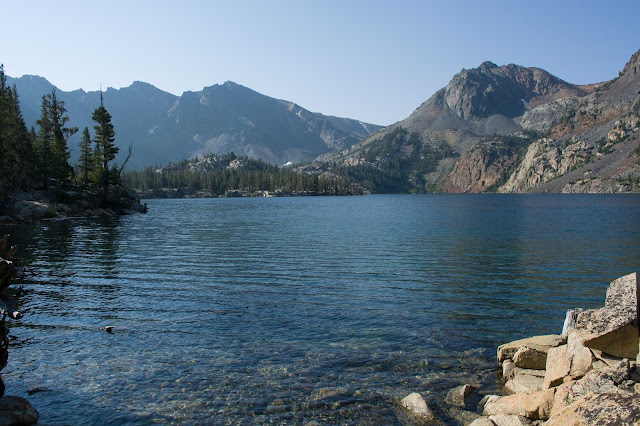 It was a beautiful lake. The following three pictures are the best I can do to pan around the lake since I could not capture the lake in one shot. 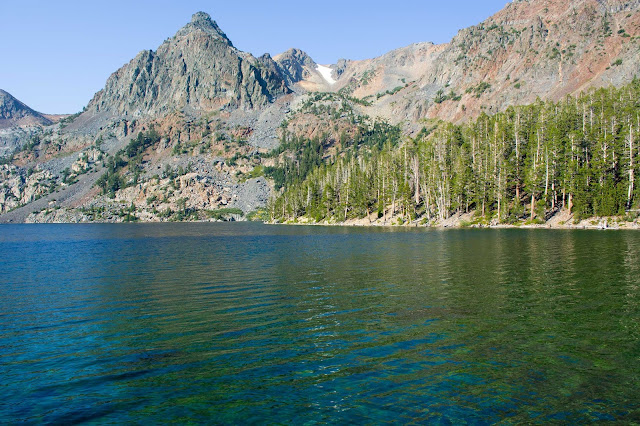 It is a good sized lake. 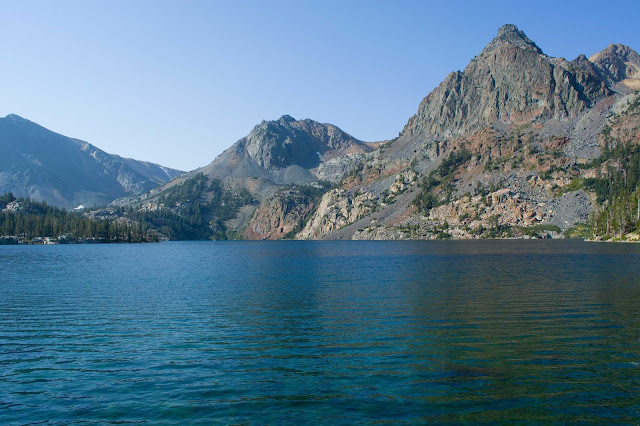 We eventually hike along the lakeside trail to the other side. 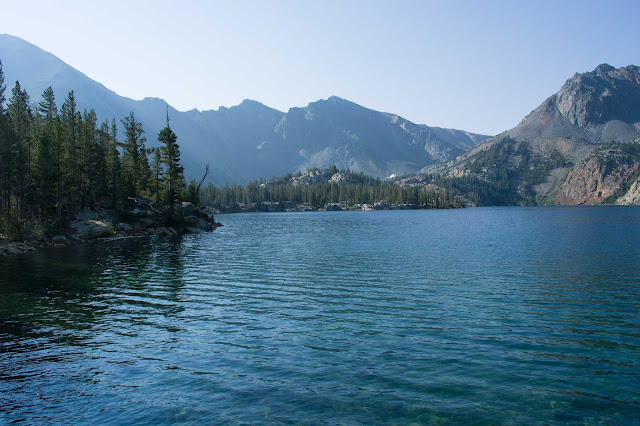 This is looking back. 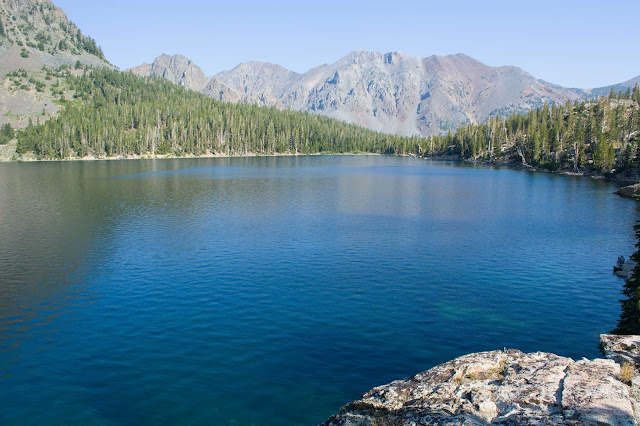 At this point I was quite content with this hike, would have had no problem just turning around, and calling it a day. Still, the day was early, and my brother was way out in front of me somewhere.

I'll continue this hike in the next blog.
Posted by The Great Silence at 10:00 AM