A kindred spirit of the blog, The Stig, has mysteriously communicated that a segment of this weeks episode of the BBC show Top Gear will be of interest to my readers. The Supercars for all Seasons episode has something called the "Four Seasons Challenge" which starts out in Las Vegas goes through Death Valley to the High Sierra to Mammoth Mountain. Part of the challenge ends up at Bogart Curve on Whitney Portal Road as seen below: 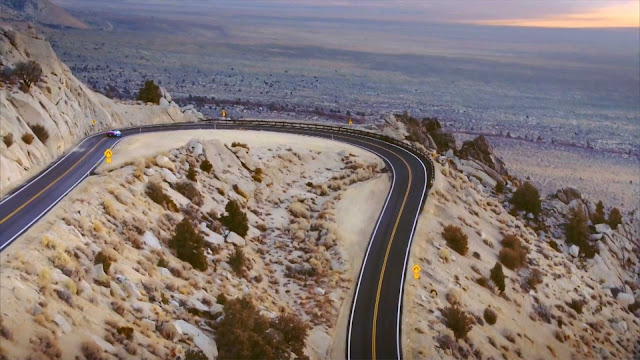 The episode has already aired in the U.K. and should be airing this Sunday night on BBC America. However, check your local listings to find out dates and times.

I'll just say The Great Silence Blog had a tiny little influence on some of the ideas in this episode. Not whole lot, but it was there. While watching the episode I was amazed at how they used some of the concept ideas that I knew of before they filmed it and how the final product came out. It was really well done. There is this point where they travel by Owens Lake, which really isn't a lake anymore, but the reflections and the scenery make it very powerful! So be sure to check it out.

A few of my related blog entries on some of the spots used in the episode:

As far as this blog is concerned. I've been a bit lazy in the past few months. I should have a minor project up in a few weeks. The big project that I meant to have up by the end of last year then delayed is...still delayed. I haven't forgotten about it, but need more time on that one.

It is nice to know the the drought is over in the High Sierra at this time. Lots of ice this time around. This is good. I'm excited for this season!
Posted by The Great Silence at 8:00 PM