I hope you are having a great holiday season. It has a been a long time since I have done something for this blog. I owe some of you that have e-mailed me over the past year an apology which I will get to. Seeing how this is the last day of the year I have been reflecting on what happened this year.

1)What happened this year?

This year was kind of a disaster. When I began the year I made a Youtube video explaining all the things I intended to do. There was really only one thing that would prevent me for doing more videos, showing pictures, and doing more blogs on here.

At the end of last year, my mother had just passed her driving test when she started to complain about something hurting in her right arm. It never improved over the holidays. Took her to the doctor at the beginning of the year and was told a few things.

Thinking things would get better I started a few new blogs during the middle of January. It was within a few days of that we had to take her to the hospital. We got the news she was not doing too good. So, long story short I took care of her for the next five plus months until she took her last breath.

Both my mother and father were really great to me. My mom was just awesome. Always great to talk to and encouraging. A lot of my soul got ripped out during all of this because I realized just how much I was dependent on the well being of my mother going back as far as I remember. So, at some points during the next year I will probably say things on video and in the blog just as a "shout out" to my mother's soul and memory.

My Apologies! A bunch of you e-mailed me this year. I would say a good 95% of the e-mails I did not respond to. Nothing personal to you, but if you read the above I had my hands full and in some ways still will for a while. I just was not that motivated. So, if you see this I am sorry and please write me again in 2020 if you wanted a response. I'll try to be better about this.

I pretty much forced myself to do those last blogs back in March, but I really was not that inspired in those. I am still not really all that inspired, but I do have some items I want to share at some point this upcoming year.

Last year I did not get to go. This year the Eastern Sierra fall colors were just not as good as other years. The timing of the colors was a little off. On most years you have a window of opportunity in some areas of about two weeks. I'm not sure if it had to do with excess snow and water from the winter, the weather, or just some other factor. The time I was there I could see the colors continue to change over the week, but it was a bit irregular. Some leaves stayed green, others were turning gold. This was one of the best areas I experienced at the time. I was at the June Lake Loop at one point right before I left. It had those irregular patches of green and some yellow, but nothing worth showing. I thought as I left it would be another week, but even then lots of leaves had fallen. 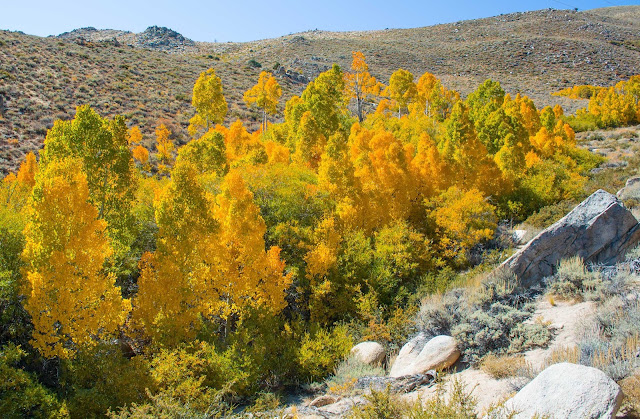