Spring Thaw (Summer is a Here!)

I am going to mention a few things about how I will be operating this summer on here, but before I do that…

A few weeks ago I was finally on a trip out of town that I have not had since last fall. This was not a fun trip because it was mostly about doing yard work. I did get a few hours of playtime on one morning though.

The full report on what I was doing there will have to wait. It was a hike back to Fantail Lake and the area around there just over Tioga Pass. Most of the time when I visit this lake there are more people around and it is a lot more green.

We did not take the normal trails I would usually take to get back here. We were actually up higher and then descended down to it. After looking at the lake we decided to go up higher still since we had the time and it was still early. I was curious to see if we could find Spuller Lake.

As we scrambled higher and higher I decided we did not need to go any further. I was kind of disappointed I did not find the lake because it looked like we would have to go even higher. So we stopped and rested. Then I looked a little more to the west. Oh, that is where Spuller Lake is. I have not looked at my coordinates online yet, but I think we found an iced over lake that would have to be it. 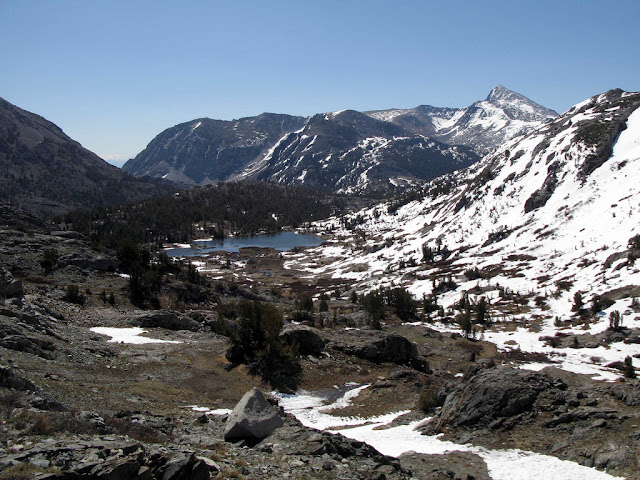 What you see above is from where we stopped looking back down to Fantail Lake. You can see Mt. Dana as the high point to the right in the background. Down below Mt. Dana is where the east entrance to Yosemite would be. I like the picture because it is a little different than what I normally experience out here in July/August, but not quite as powerfully scenic as I know the area to be.
It was a strange year for snow in that the Tioga Pass did not close until January which is very late. There was snow this year, but not an overwhelming amount. Normally, I would not be back here this early because Tioga Pass usually opens a little later. Even then, I would not come back here due to the amount of snow that takes a month or two to melt away. In any case, it was good for a few hours of fun and the Great Silence was definitely there.

As far as the blog goes, here is how I intend to do things over the summer:

1)I will be posting a few items over the summer. I decided I am going to go ahead and edit some older video footage together from the old camcorder. Any footage from the new camcorder will have to wait until I get a new computer.

2)Even though I have been sick and am starting to feel a lot better than I did two months ago, I think some people were under the impression I would start right back up with weekly blogs, etc. I really don’t intend to do that anymore as I have said more than few times. In the past I thought it was important to keep the blog going with regular articles on things I wanted to post about. I don’t feel that way anymore. I would rather post a few items once in a while and see how it goes. If I feel differently in the future then so be it, but that is the way it will be for the foreseeable future.

3)Same with comments. It’s just not something that I care too much about right now. Let’s just say that I have social media burnout, and I think the internet is really being dumbed down because of the oversaturation of it.

This is from the trailer of Django Unchained a movie coming out later this year. Props to Quentin Tarantino for filming here.

Anyone have a clue where this was filmed at?

Hint: yeah, I've covered it before.

Edit (June 20, 2012): Okay, time to show where the above picture was filmed at. It's an easy one. I probably have a picture like the above somewhere on cd/dvd, but can't find it. In fact, I did have video footage from last summer looking in this direction, but decided to cut it out of the video I did. Then I deleted it. Let me give you something that should work, and then maybe I will add something more by the time the movie comes out.
Here is another angle of Gene Autry Rock. There are about four rocks on the left side in the background. 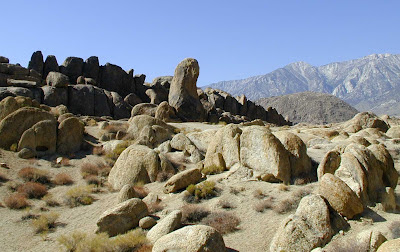 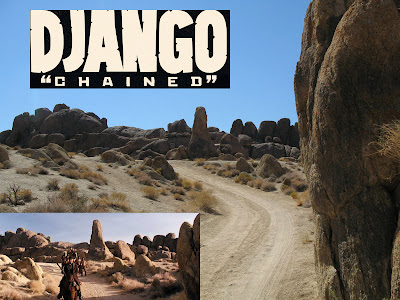 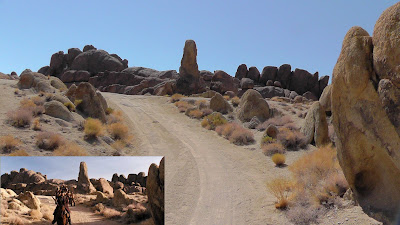 Gene Autry Rock Blog (and links to videos)
Posted by The Great Silence at 3:42 PM