(GPS: N35 21.560 w117 59.170)
Compared to the last two blog entries this one took a little more work to figure out. When I originally started to visit Red Rock Canyon this is the one I wanted to find the most. I had the Reagan one in mind too, but I knew this would be a good one to show if I could just get it right. The reason this one took so long to finally put up is that each time I would come home, look at what I had, and then few weeks later I thought I could do a little more fine tuning the next time I would get there. So, I kept putting this one off until now.
Man of the West is not only a Gary Cooper movie, but an Anthony Mann directed western. I always liked Mann's movies, but most of his best was done outside my geographical range, at least for the time being, so I was happy to at least get one of his movies in on here. It may not be the best he did, but the use of the landscape for the final confrontation is very well done. There was also some luck involved with the clouds too.
Here Gary Cooper confronts our bad guy, Doc (played by Lee Cobb).

You should be able to see where Doc was standing. 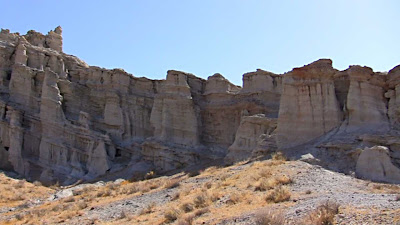 They both move from the above points a few hundred feet to the west. At that point, they both continue to "yell" at each other.

In the above picture, the movie camera is down below looking up at him. In my picture, I am off to his side looking at the rock he was standing against. 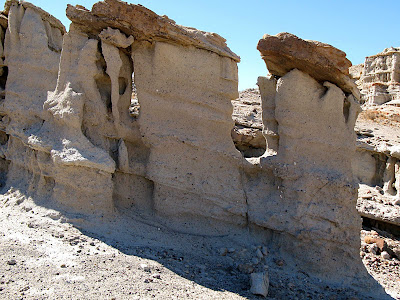 Cooper is down below looking up at him.

You can see how the rock is that Cooper stands behind. 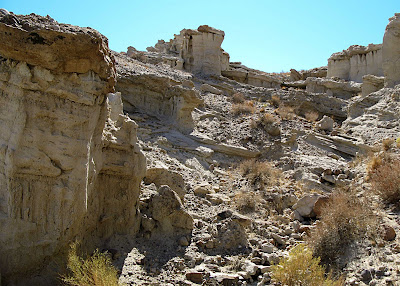 Eventually, Cooper starts heading up to him and takes care of business. If you see the video you will notice that after the gunfight they end up right back down here.

SPECIAL NOTE: this we be the last blog I do for at least a few weeks. I have spent a lot of time on the computer over the past few months and I need some down time. I think I am suffering from "information overload" by reading too many Yahoo.com meaningless "news" articles. ;) The reason I am mentioning this is that if anyone sends me e-mail over the next month I may not respond right away. At some point in August I will resume everything. See you then!
Posted by The Great Silence at 10:38 AM

This is also known as Jungle Jim Rock. This is another one that is well known and easy to find while walking around Corriganville. It is best known for its use in the Jungle Jim movies with Johnny Weissmuller. 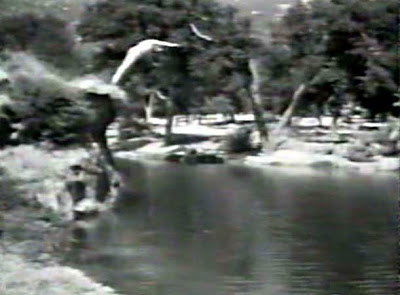 No water anymore in what was known as Robin Hood Lake, Jungle Jim Lake, and a few other names. 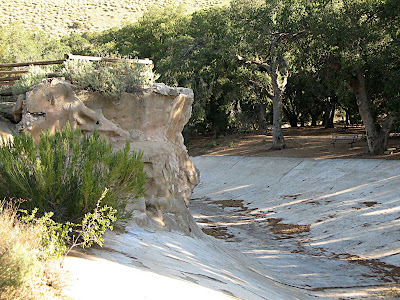 Other movies or tv shows would use it as well. In the video I added a short scene from the Annie Oakley tv series. I go up above it and show some of the remains of what Hollywood did to the rock.

I recently upgraded to Vimeo Plus, so I am just testing how their embedding works.

The Revenge of Black Star Canyon (Black Star Falls) from The Great Silence on Vimeo.

Posted by The Great Silence at 9:59 PM

(GPS: N33° 47.850 W117° 39.300)
Note: the above coordinates are approximate and just useful for looking at something like Google Maps to get the idea where this is at. The hike, although not easy, is primarily following a streambed. A gps is not really useful to take along due to the interference of the trees and rock walls around.
Let me give the background on me doing this one. A few weeks ago I posted the Beek's Place hike that was done in the middle of February. In the video I pointed out exactly where I intended to go at some point in the following weeks. It had been raining at lot during that time so I knew it would be the best time to visit the falls. I was preparing to go.

Something to keep in mind, like a lot of Black Star Canyon, the falls have been somewhat mysterious for a bunch of reasons. Very little has been written about it. I have seen at least one book written during the 1980's that has a picture of them. Occasionally, over the past few years, someone might post the pictures of the falls online somewhere. Yet, the exact location was not really that well known, that is until the recent O.C. Register article. It was almost the time I intended to go at the end of February that I saw the Whiting article on Black Star Falls in the O.C. Register. At the time, this was somewhat discouraging because it felt like all of southern California was going to be heading to this one right after the article came out. So, I decided to not go that weekend or any of the next few weekends, but wait until I had a spare mid-week day/afternoon to do it. Sure enough, lots of people have reported going to the falls since that time. So, that gives you some of the background on what happened during that time and why I just waited until now to post about it.

Of course, I had been to Black Star Canyon before which I have covered in a few blogs at the end of October and the beginning of November last year. I had experienced fall conditions. This time I was getting winter and almost spring conditions. It was a lot more green out this time which made it a lot more enjoyable to look at. You will notice the day was very overcast and almost looking like I could encounter a storm at any moment. 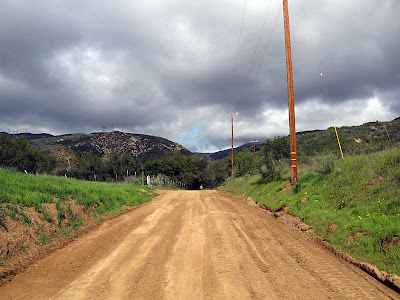 If you have read my previous Black Star Canyon blog I did for Halloween, you know that this area of the Santa Ana Mountains is notorious for being "haunted." One of the locals that lives back here has a habit of being confrontational to check up on who goes back there. The main thing I need to say here is the public has the right to walk on the road. If you go off the road you are probably on private property. I have noticed since the last time I covered this area that some people online have reported bypassing the barbed wire fence to visit where the bus is. That is not something you are supposed to do. Stay on the road and you are fine. 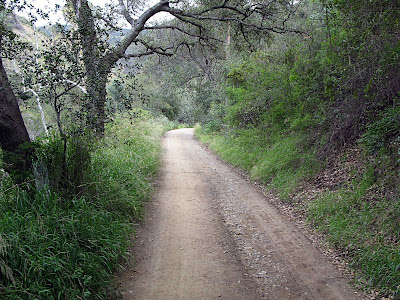 The conclusion I came to last time is the spooky thing about this area is that at some points you can not see too far ahead on the road you are walking because of the turns it makes. The dirt road gets smaller too at times. It is a great area for setting up ambushes. In any case, I passed all the familiar landmarks along the road and finally got to the concrete cylinders. At this point, instead of going left up the switchbacks, I went along the stream to my right that started the jungle adventure. 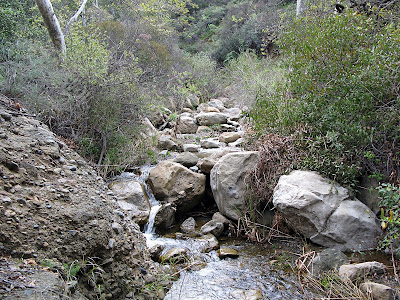 The rains caused a lot of water for this stream which was a good thing. There really is no trail here. You just walk along the stream, through the stream, over the boulders, and bushwack through the poison oak. That was one thing I knew to expect so I wore lots of clothes. I was lucky in that I did not get a major case of poison oak like I have read others have. 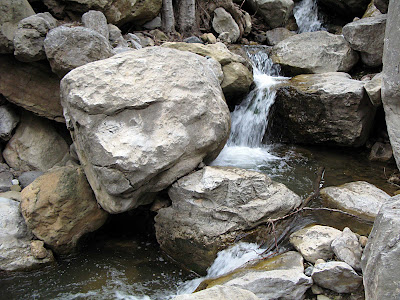 The rock above was the crux of the whole adventure. I had a hard time getting up that one. I kept slipping since it was a very smooth rock. Eventually, I got up it, but I had wondered if I might have to turn around. I might have been able to bypass it going through that pool to the right. At the time, I decided against it because, if I recall correctly, it was a little too deep.

Keep in mind this "jungle" part of the hike is a total distance of about a mile, but when you are doing it the pace is not really fast due to the boulder hopping, bushwacking, and moving along the stream. The elevation does increase here. So, it really felt like a four to five mile trip one way. 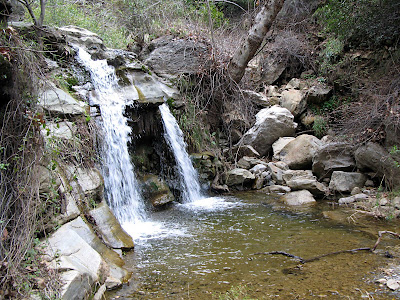 In the above picture, I encountered the small twin falls. There were lots of small waterfalls on this hike. The above small falls are key to know you are near the end. I did not know that at the time. I looked way up in the distance and saw some falls coming over the hillside much further up. At the time, I was thinking how was I going to get up past that? Well, it turned out I was at the end of the hike. 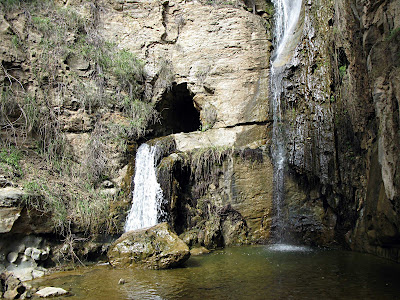 The area was not exactly the way I had imagined it. I thought the area would be more opened up at this point. That turned out to be the way most of this hike was. All throughout, the area to be traversed was very compact. Usually, this meant there was only one way to go with very little options. At the falls, this meant I could not back up and capture everything in the way I would have liked since I was so close to them. 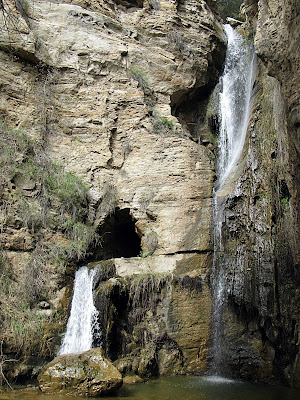 The falls are about an 80 ft. drop and land into a pool. Some of the water goes through a cave that you see forming the double falls.

I spent about 30 minutes here. I was not too thrilled about heading back since the downhill on the boulders and the rest of the jungle adventure was really rough on the legs. I did fall down a few times during this one. Of all the crazy stuff I do, this hike was one that seemed a bit more dangerous to me than normal. Some of the pools were deeper than what they appeared to be, so that was another issue I had to be concerned with.

I did not encounter anyone on the way up to the falls, but on the way back I did meet two separate groups hiking up there. I gave them the information they wanted to know, but I was not too happy or friendly at that point since I was getting tired of walking on boulders and bushwacking. I got back to the main road and then it was an easy walk to drive out.

So, it is an interesting sight for what one normally would not expect to see in southern California. I suspect it is really dried up or close to it now. Sometime in the future after some rains I would like to see the source of the falls from up above. The area is still somewhat mysterous to me. One curious thing, looking back at some the pictures and video I took, and keeping in mind the legends that have come out of Black Star Canyon, is that a lot of the rocks look like that have faces on them. Sort of like aliens, monsters, or skulls. LOL.

About a week after this I did another "jungle adventure." That will come at another time.