We cannot let Uncle Ben (Gabby Hayes) get killed two blogs back without having Hopalong Cassidy avenge him. This one will connect the last two blogs. The first one showed you where Hoppy was resting, but then finds out Uncle Ben is dead nearby. The clue written in the sand by Uncle Ben was Thunder Mesa. In the real world, the picture they show in the movie is a well known Red Rock Canyon rock formation. However, Hoppy ends up taking his posse about 1/2 to 1 mile south of where he was resting to where the Thunder Mesa hideout was.

Here is Hoppy leading the posse on the assault of the Thunder Mesa hideout. 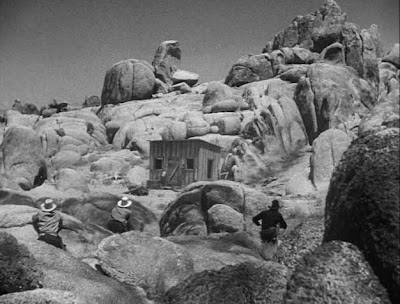 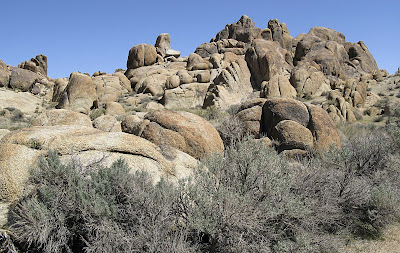 Now I will connect this to the last blog. This was the picture I used to show the mine that would have been on the slight incline in the middle of the picture. 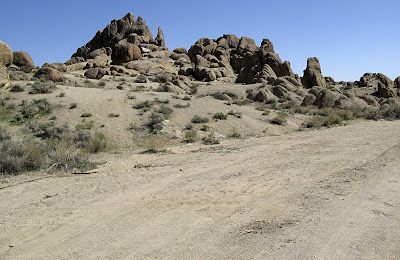 Now looking at the movie picture below can you see where the hide out would be in the picture above? 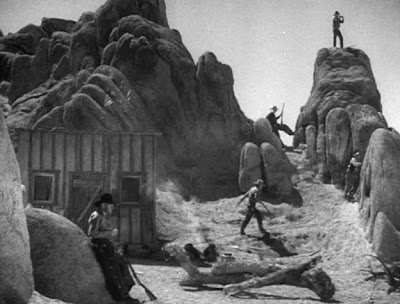 I do not have any pictures with the exact camera angle as the one above, so I just took my picture above into photoshop, zoomed in, and cut out the part I wanted. The hideout would have been right next to where the rock(s) is that look like someone folding their hands together in prayer. 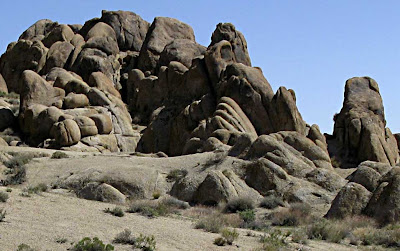 And, just because I am in the mood...they never knew what hit them. 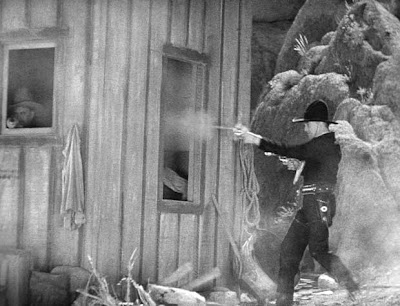 So, this is not rocket science. Once you find the patterns of the rocks you start seeing them again and again. In this case, when I originally wanted to find this one years back, I saw it used in the movie I referred to in the last blog. I showed in that blog a feature that helped me figure that mine location out. In the past I have pointed out that sometimes watching other movies helps one figure out other movie locations.
This was the 1st of 66 Hopalong Cassidy movies. A good percentage of them were filmed in the Alabama Hills. It seems to me about half of them were, I used to have stats on this in notes I was taking, but I would have to look. So, the Hoppy movies are usually good examples of filming in the Alabama Hills. At one point I had most of the general areas used listed in notes I had taken. I was going to go out and start then listing them all on here. I decided against this mainly because I would rather mix in other movies to show some of these areas.

Shootout at Thunder Mesa (Vimeo Version)
Posted by The Great Silence at 11:09 AM

The Cisco Kid Mine (The Alabama Hills Series)


The above coordinates are close, but I just approximated them from Google Earth. I have probably taken readings here before, but cannot find the coordinates. The next time I go back I will update this. I have done something very close before nearby regarding a John Wayne location. Which means I am going to use one of the pictures I used there to make the connection. This one, used in tons of old westerns to Bad Day at Black Rock: 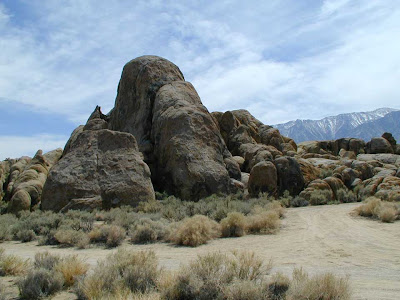 This is from the Cisco Kid and the Lady with Caesar Romero. The big rock formation is on the right side. 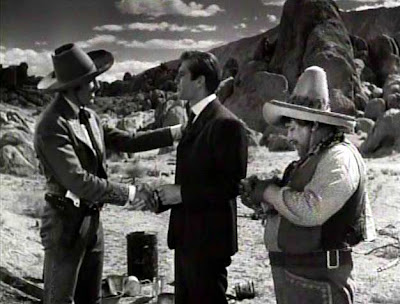 They are standing near the "mine" used in the movie. 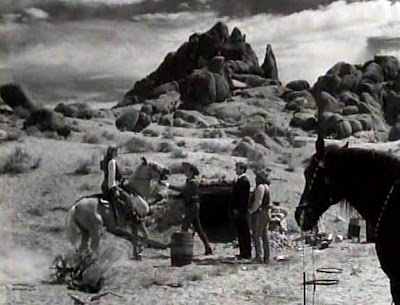 As Cisco and Gordito leave you can see more of the rocks. 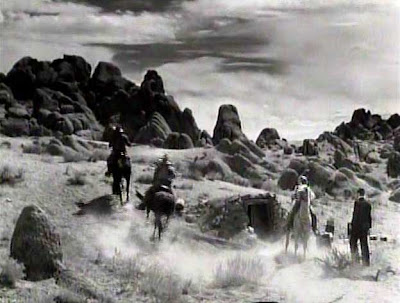 I have one final blog I will post tomorrow on this little Alabama Hills trilogy that will connect them with each other.

This video is primarily about the Hopalong Cassidy movie filmed nearby, but it has this site shown at the beginning:

Shootout at Thunder Mesa (Vimeo Version)
Posted by The Great Silence at 12:07 PM

(GPS: N36° 36.610 W118° 07.460)
Some years back I came across a blog that had a picture somewhat like the first one below. It was actually a better picture and more direct to the point as to what I want to show here. It was his first time visiting the Alabama Hills and said that he must have seen this location in some old western. I told him that he was right about that, and I knew for sure that it was used in the first Hopalong Cassidy movie in 1935. I then proceeded to give him some of the worst instructions (face palm) on how to get to Gene Autry Rock.

This is one that I have delayed and delayed putting up on the blog since the beginning. It is an easy one to find, and most people have driven by it while driving on Movie Rd. Basically, you just follow Movie Rd. north, then when it turns right continue on the road, but look to the right and you should see the rock formations below. 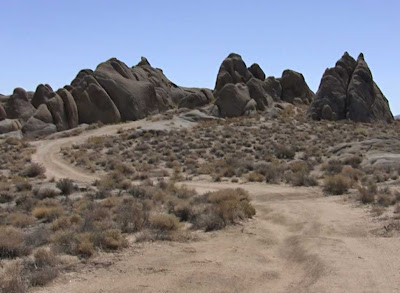 You can walk at this point; I would not suggest taking this dirt road with a vehicle (off roaders can and do). We want the rock formations to the right. 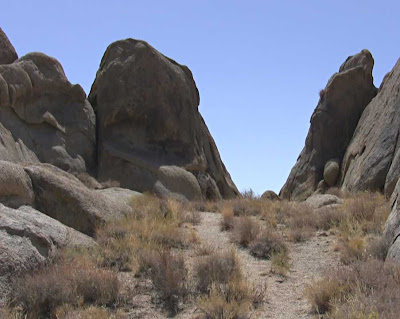 This is what we are after. 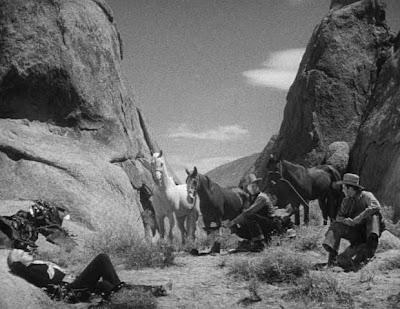 You can see where he is resting. 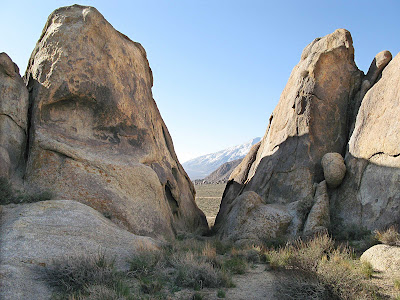 Hoppy would have have taken a nap right here. 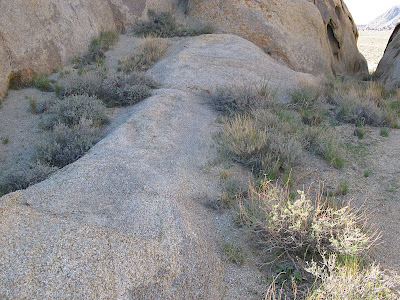 This is one of those areas that you have to come at the right time to avoid the shadows. This is part of the reason I have delayed putting anything up. My other problem is I thought I had better pictures than some of these above. If I ever find them I will come back and replace these.

I should mention that, in this scene in the movie, Hoppy is resting and hears a voice. Uncle Ben (played by Gabby Hayes) had just been shot in the previous scene. Unfortunately, he died before he could tell Hoppy the important information, but Uncle Ben had written the words "Thunder Mesa" in the sand. Hoppy, realizing that was the clue to where the bad guys hideout was, gets a posse together for the final confrontation at Thunder Mesa.

As side story, the last time I was here a year ago I was driving down Movie Rd. I decided I wanted to video the arch. The problem there, is that over the past few years since they added the tourist trail, it has become more well known and more people visit the Alabama Hills just to see that. So, I knew I would have to really work a bit to video it right without people showing up right as I was doing the video. I would have to time it carefully.

As I was driving along Movie Rd. I passed a bunch of cars. They were all going very slow along the road. I made the right turn and then proceeded to the big turnoff for the short trail to the arch. No one was there! Great! As soon as I stopped, everyone must have realized I knew where I was going. All the cars I passed decided to park there. So, I was not quite alone.

I decided to cross the road and do this location I showed above, along with a bunch of others I have shown this past year. There must have been about thirty people at that parking spot going off to the arch. I came back about an hour later for the video, but the footage was not what I wanted.

Posted by The Great Silence at 8:30 PM

Youtube Version
Vimeo Version (16:9 Version of the above)
Posted by The Great Silence at 8:03 AM

(GPS: N32 47.040 W117 06.350)
In the state of California, as part of California history, all 4th grade elementary students get exposed to the California missions. If they live close to one that usually means they get a field trip to it. I have visited a couple of them this year. Each one I visited will come up on here for different reasons in the next six months or so. In this blog entry I hope to lay part of the foundation for the epic project that I intend to present in 2011. In that project, the missions are not really the focus, but are part of the historical background of it. It will make more sense when I actually start presenting it.
This mission is important in that it was the first one the Spanish built in Alta California. As part of the colonization of the California region, the Spanish built the missions to convert and assimilate the local Indian tribes. In theory, each mission belonged to the local Indians that lived nearby. When the mission had been up for ten years, the mission was to be run by the local Indians, but that never happened with the missions in California. Later, when Mexico had control of the land, secularization took place when meant land grants were usually given to prominent Mexicans (with a few execeptions); that is where the missions land went.
Originally, Father Junipero Serra founded the first mission in 1769 near the Presido, but five years later it was decided by Serra and Father Luis Jayme that a better location was six miles to the east. That leads us to this location the mission was started in August, 1774. 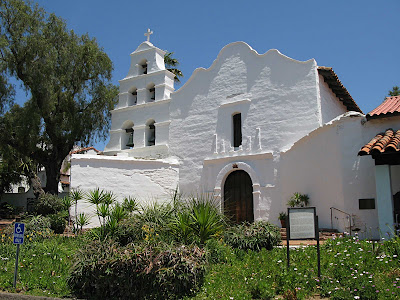 Father Serra went on to found other missions along the coastline. Father Jayme had great success in conversions, but some Indians nearby were not happy with the changes. On November 4th, 1775, in the early morning hours, hundreds of Indians attacked the mission. While lighting it on fire, Padre Jayme confronted them. He is reported as greeting the attackers with, "Amur a Dios, hijos! (Love God my children!)" He was mobbed and violently killed. When I went there I faced the church in the above picture and then headed off to the right side. 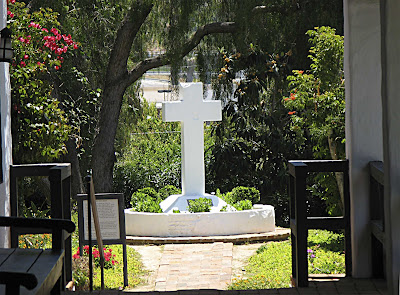 The site of the cross is supposed to be close to where California's first Christian Martyr was taken from and killed. There is a monument dedicated to Father Jayme there. After going inside the mission I went into the church. The mission church is a basilca. 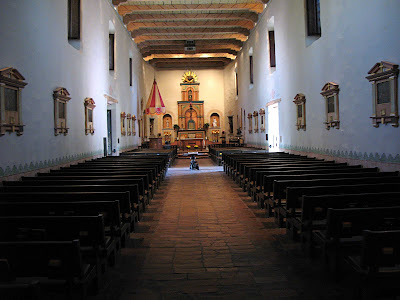 All of what you see in the church had been rebuilt a few times. What happened was Father Jayme's remains were eventually brought back and located here in a vault near the marble cross you see in the next picture. The remains of a few other significant padre's are here as well. However, the candle is supposed to burn continually in his Father Jayme's memory. 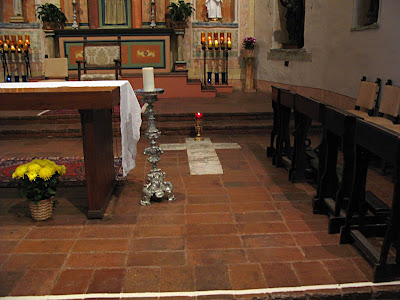 One thing to note in the following picture is that the arms of Jesus on that cross on that statue are missing. They broke off and were intended to be replaced, but that never happened. Just as I was leaving the mission I checked out the area some archeological work had been done on the foundations. 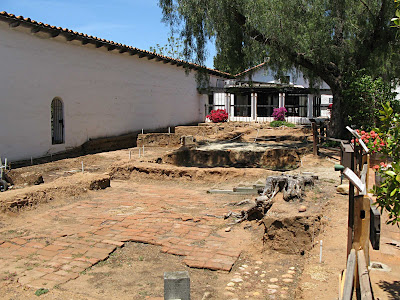 In the video I show a few more of the areas. The rectory right next to the entrance to the mission was being worked on. After going in the church, I visited the garden which gives you the other side of the church bells. They do have a small museum named after Padre Jayme that shows some artifacts of the time period; all the missions I have visited have something like this.

There is tons of information on the missions and the San Diego mission out there. Google is your friend on this if you want to learn more. I will list a few related articles:

Another San Diego Journal Article on the Revolt

MissionTour (This shows a good graphic of the marble cross)

Finally, a good overview of the background on the missions and what happened to them.

Posted by The Great Silence at 2:58 PM