I was going to put up a picture where Reagan leaves the two horses. Then I thought I might as well just put the dvd menu up because it basically shows the same area. 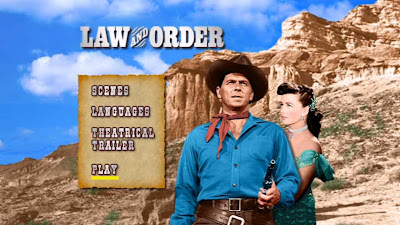 The area we are going to end up at is just to the left of his hat. 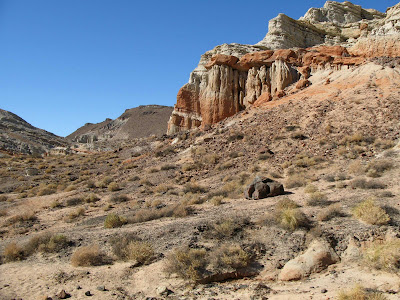 This is really close to where Reagan leaves his horse next to the other horse. The rock formation next to his hat in the menu feature and in the distance that you can not really see distinctly because it blends in is where we are going to end up at. 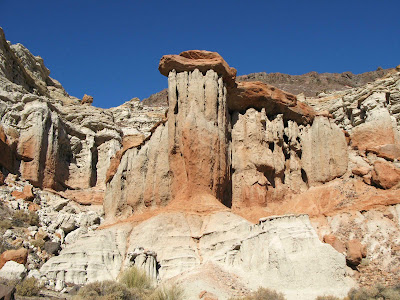 That thing right there. I do not think Reagan climbed up the left side of this picture. With the editing that was done I think it was a few hundred feet to the east (right of picture) where we started out. I could probably figure it out pretty easily on another trip, but when I came on this day I was pressed for time and wanted to be sure I got to the top of this rock formation since I knew that was where Reagan was shot in the movie. 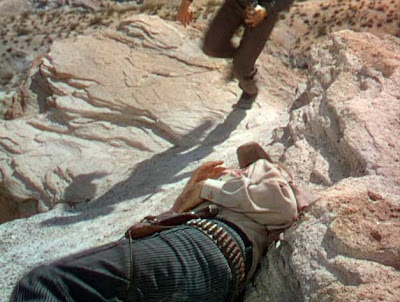 Here is where he falls in the movie. Jimmy Johnson (played by Russell Johnson) regrets he shot his brother and runs over to him. 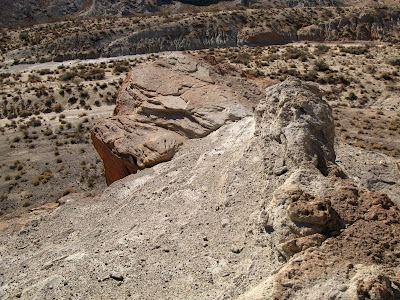 This is it. What I am noticing about Red Rock Canyon rock formations is the sandstone seems to show some changes over the years. I can tell I am in the right areas, but things just do not seem exactly the same. This is a different experience compared to what you see in the Alabama Hills. Everything looks the same there after the decades. Here the elements have changed some over the decades. 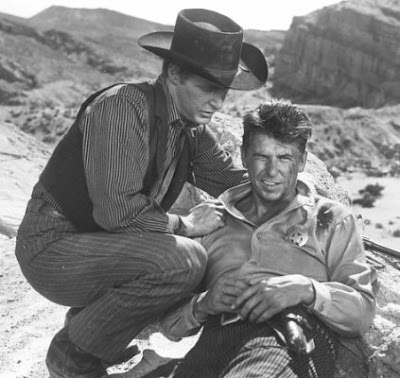 I took this picture off of the entry for Law and Order on IMDB. This is not in the movie. I like this one since you can see the Acropolis in the background which shows up a lot in Red Rock Canyon movies like The Mummy and Hell's Heroes. 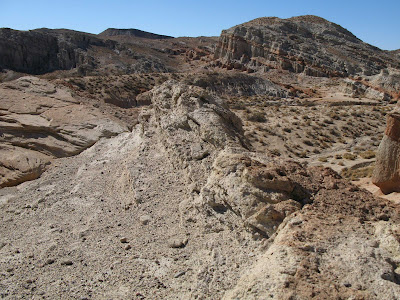 The movie camera was pretty close to this. I have a bunch of other Red Rock locations, but I will wait until later dates to put them out.

Where Reagan Was Shot (Vimeo Version)

Posted by The Great Silence at 6:39 PM

When I wrote my last entry on Jan. 31, 2008 I really had no clue I was about to encounter some of the worst days I have ever experienced in my life. My father "graduated" from this life and went to be with the Lord a few days into this new year. Although I knew the day would eventually come, and everyone faces the passing of relatives at some point, I was not expecting this to happen for at least another five years or so.

At first, I was very close to pulling the plug on this hobby project. Although my father had little to do with it, he was a very big inspiration to it since he introduced me to so many of these areas I have gone to and talked about on here. It was always fun to show him areas we used to fish or drive by when I was kid from the perspective of the top of a mountain peak. The other part of this is he was the photographer in that he would spend hours and hours working on his pictures. When things became digital he became very good at using photoshop.

I am pretty much a point and click guy when it comes to pictures. My approach is really different due to the amount of time I have on my hikes and locations. There are certain things I look for and am usually not out for the "perfect picture." My father still tried to give me advice on things he wanted me to do while taking pictures.

I always hate it on the internet when someone says, "This is my last message." Then they end up coming back a few days later as if nothing ever happened. I suspect that is a plea for sympathy, but for me if I were ever to do that I would mean it, and it would be over with no turning back. There have been things in the past that I did just that. I decided to let some time go by and see how I felt.

When certain types of tragedies take place in life when tries to regroup and think of what is ultimately important. I had to ask myself whether what I do here is really important to me or not. I know with certainty my father wanted me to continue to do what I was doing. I am still thinking all of this through because there are other important things in life I still want to accomplish. There is only so much time in this world.

One thing I was going to say, regardless of everything I have just written, is that I do believe at least one thing I have done will probably come to an end eventually. This has to do with the way I use youtube. I have always been somewhat skeptical of youtube. It went through its anarchy phase where almost anything went. Now, due to lawsuits over copyrights, a lot more restrictions have taken place. No doubt this will continue in the future in such a way that may stop what I do on there.

A lot of this, for right now, has to do with the music industry which does not affect me too much. I know this is not going to fly with people in the business, but I have always seen youtube as more like commercials for music or movies if content is being used. I have always tried to "plug" the dvd's, if they are available, for the content I have used. In fact, I do know that I have helped out the music, movie, and town industries economically speaking because I have a bunch of you that have told me so because you saw something I did on here you liked and went out and used your money! This is one area that I am not sure some of the big companies may understand. They may end up shooting themselves in the foot if they become hostile to fan creations. I have not really had any major issues here regarding this, but I know of one situation where a distributor tried to pull a "stunt" which may have damaged their sales. All I know is they will not be promoted here at all, and I know many fans and friends will not purchase their products because of this.

So, keep in mind I see things like this blog and youtube as fun things I do with no intention of money making. Although if someone really wanted to make it worth my while I would listen, but I doubt seriously I could make the money back I have put into the time and trips I have taken. For the time being I will continue what I have been doing in the past, but there maybe times where nothing takes place for weeks or months. We will see.

Finally, in the U.S. we have a new President. Congrats to President Obama. I wish him well for the sake of the country even when the media decides the parade is over. ;) For me, I just hope some changes are not too radical right now. I have encountered a little too much change this month. Peace!
Posted by The Great Silence at 9:23 PM