"On Earth All Along"

For the full effect of what I was trying to do in this video I suggest you watch it first before scrolling down:

There are a few things I was trying to do in this video before I got to the main part of it. If you have been reading this blog for the past few months then the first part of the video is just a quick overview of some things I have said on the blog. That wasn’t really for you blog readers, but just to catch people up on the Youtube channel that don’t read the blog about some of my side-interests.

This video marks the 100th video for that channel. I have certainly done a lot more videos than that if I were to count everything I have uploaded since 2006. My previous channel was really close to that amount before I shut it down. However, this is the first channel I have had on Youtube that hit the 100 video mark. I have taken some videos down in the past, some videos are private, and some videos I could take down in the future, but I am letting this one represent the 100th public video. It was somewhat of a goal early on to hit the triple digits with videos, but not as important for me anymore. These days I just want to focus on quality, but you will have to forgive me if I throw-up some screwball videos once in a while. ;)

This is the first time that channel’s viewers are able to see a video from the newest camcorder. Depending on your computer hardware and connection you might be able to max out the settings on Youtube and see what it is like. Although for most people I would just recommend keeping the smaller screen. Do whatever works for you. I still will be uploading older videos from my old camcorder, but in the future you will see more from the new one.

Alright, enough spoiler space, hopefully you watched the video above so let’s get to the Twilight Zone moment here. The ending location of the original Planet of the Apes movie is rather well known. There are lots of things in print and online about it. One thing that has always bothered me about this spot is if you go to Point Dume (actually, Pirates Cove in Malibu) it doesn’t really look like the same spot as where the movie took place. While there is no doubt that the ending took place here, I haven’t found anything that is a little more specific as to what was going on here. So, if all goes well I hope that you will be able to see exactly what they did here, and I hope this is my little contribution to this well known location. Let’s backtrack a few minutes earlier in the movie:

As Charlton Heston and Nova (Linda Harrison) ride off on the beach, you see Cornelius (Roddy McDowell), Zira (Kim Hunter), the other chimpanzee, and Dr. Zaius debating about why Zaius wants to destroy the mine in the background with human artifacts in it. Now this shot was very clearly done at Pirates Cove. Just look to the right side of the cliff and you see that silver/white tainted rock. While there are other features to match up, that one is the easiest. You should be able to match this up with the one below: 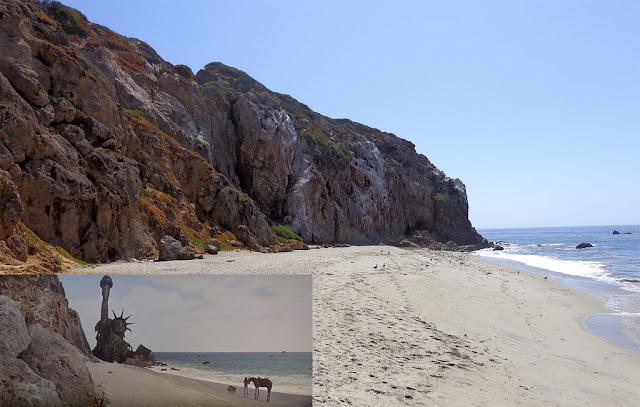 Now if you look at the movie picture of the Statue of Liberty and compare it to my picture above things do not match up as easily. When I first saw pictures of Pirates Cove many years ago I was really bothered by this. Was this really the location? I did not doubt the people that said this was the spot, but I wanted to find a way to verify it independently.

Let’s go with the easy identification first, which I think is kind of amazing. If you look out into the ocean side to the right and look at those rocks they are all the same! My angle is off because that single rock is not lined up with the two close together in the background. So, it is matter of moving more to the left (and probably forward too) to get them to line up in my picture. You can see this in the video too if you look for it.

Of course, this is not the Alabama Hills, and I took into consideration that the salt water ocean and erosion could easily change the look of the cliffside rock formation over the years, especially something filmed over 40 years ago. While things have changed, it is just a matter of looking a little closer at the cliff side.

The first well known clue is that the Statue of Liberty was painted into the movie by an artist. I will link to a video below that discusses this. That helps, but didn’t really solve the problem for me. One might think that the Statue of Liberty was just to the right of where that cliff base touches the water. In fact, most of what I have seen in online tributes to the movie’s location do just this, but that is not right.

In the original movie picture, I circled some of the key features. Interesting enough, the three boulder rocks you see on the left side appear to be covering something up. I think those were added in so you would not be able to tell that this was a place seen just a few minutes earlier. If they weren’t there it would make it a little easier to see this.

I zoomed in on my picture and circled the same spots in it. The angle is slightly different in my picture, as I pointed out earlier I would have to move a little more to the left, but this is it. This one is more difficult in comparing so if you have an interest in this I would encourage you to click the pictures and save them so you can zoom in on the original size to compare. Use something like Photoshop so you can open up the photos in order to zoom and compare at the same time. Hopefully, you can see some of the small crevices and notches in the rocks.

So, the Statue of Liberty was actually inserted in between those circles into the cliffside itself. Hopefully, this animated GIF will work to show you the idea:

Here is the video on Youtube called “Behind the Planet of the Apes: ‘Creating the Statue of Liberty Ending’"  that talks about how they did it. One thing that I should add is it appears they also shot part of it on the beach right before you enter Pirates Cove. At 1:23 in the video they show what they were building as a set for the shot looking down on Charleton Heston from behind the Statue of Liberty. So, that part doesn’t appear to have been shot inside Pirates Cove. That would be the Westward Beach (which borders Zuma Beach) side you have to cross to get to Pirates Cove.

Sometime in the future I intend to show another well known Planet of the Apes location.
Posted by The Great Silence at 1:25 PM