The July 4th weekend was fun, but pretty wild for me. You are only getting the tail end of the weekend story in this blog, and the rest will probably come out at a later time. This blog entry is one of those that is not as important to me, but I do know that I have people that read here that like this sort of thing so I decided to cover it.

I am sort of the "odd man out" in my extended family. I am not as hardcore into cars as my relatives. Whenever I say, "The use of a car is to get you safely from one area to another," I get a strange look back at me that I totally have no clue what I am talking about. I have attended car shows with people in the past, but I tend not to make a habit of it.

I decided to go to the Long Beach Car Show this year on July 5th. It was a Sunday evening, it was near the beach so I knew it would be cool, and it turned out not having an overwhelming amount of people so it was easy to park and wander around.

I noticed this car right away and it was one that I think ended up getting a major award that night.

There were a bunch of others that were cool looking. 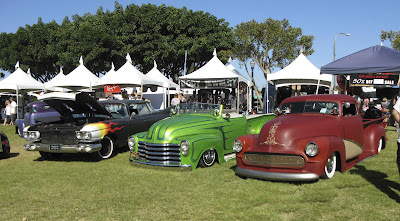 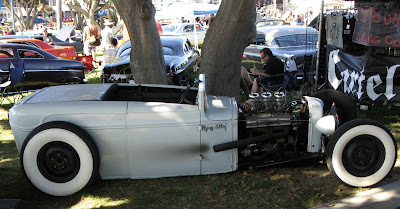 They had a green one like this called the "Border Patrol." It is one of those things that is only funny if you live in California or some other border state.
I got some really good chicken and excellent cole slaw there. I then listened to a punk band and a rockabilly band. They were alright. The reason I stayed around was to see an old 80's hard rock and blues band Great White. It was probably about 25 years ago I saw them open for another band in Costa Mesa. Back then they were a little more wild and had a lot more hair. 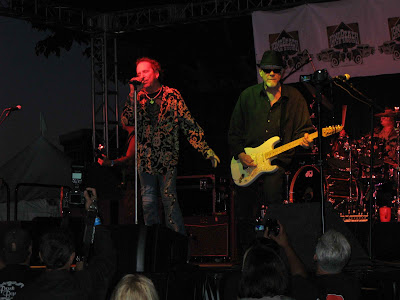 The singer, Jack Russell, had broken his pelvis a few months before so he was not dancing around on stage very much. He ended up singing pretty well though from what I could hear. Stay healthy and clean Jack! The guitarist Mark Kendall seems to be looking right at me above. 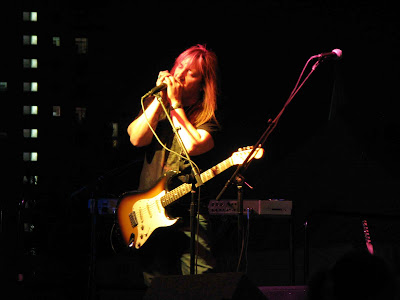 I know exactly what part of the song, "Rock me," Michael Lardie was using his harmonica for. 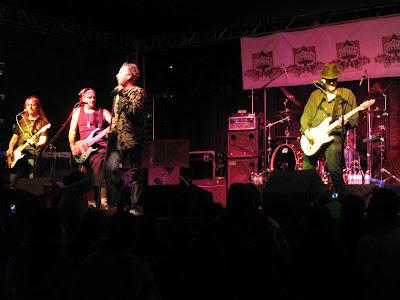 The bassist is new, but the rest of the band including the drummer who you can't see, Audie Desbrow, are the same guys I saw 25 years ago. The band gave a pretty solid performance.
During the last song two young girls got up on stage that I assume were either related to the band members or their associates. They ended up singing the last song with the band and I thought it was kind of cute.
I had a good time. The one thing though is it seemed like I was one of the very few without tattoos at this thing. The "odd man out."
Okay, in the next blog I will get back to what I normally do on here.
Posted by The Great Silence at 7:52 PM

Movies This Summer and the Classic Locations

First, I wanted to say if you e-mail me about anything try to mention something in the subject that makes it sound non-spam-like. I get lots of spam that automatically goes into a junk folder if it does not recognize the e-mail. I usually check all the subject lines before I delete what is in the folder. There have been a few times where I almost deleted someones messages as spam before I clicked it. Usually, I can tell just from looking at the e-mail address and subject, but I may not always do that without making mistakes. I always try to respond to whatever I am sent so if you do not hear from me within a few days or so retry.

I wanted to mention that the movies of this summer have some of the classic locations in them, but you have to look or you may miss them. I have to admit I have not seen any movies this summer. It is rare for me to go to the theater anymore. I have mentioned a few of these in the past, but I think I will do it again here. I have heard and read some of these movies aren't that good, but let's not concern ourselves with that right now.

I do not know how much of it is used in the movie, but I did see the classic Vasquez Rocks formation in some movie clip many months ago. Of course, it was used in the original tv series, but it looks like they took the rock formation and used CGI to make it look like a lot of them.

3)Land of the Lost

In the trailers I have seen they used a lot of the Trona Pinnacles. Although I have not done anything on this blog about this place I have relatives that live in nearby Trona and Ridgecrest. I don't think I have been to the Pinnacles in over 25 years. Some day I will go back. Sci-fi movies get made here once in a while.

4)Transformers: Revenge of the Fallen

The very beginning scene has Lone Pine Peak and the Alabama Hills. I mentioned this back in October.

They did shoot some footage from the Lone Pine/Alabama Hills area. I don't think it was a major location for the movie. Whether they use it for the movie and how much is actually in we will find out next month. They were to have shot some footage at the Los Angeles National Cemetery too. Since my recent posting on the cemetery I have been told it has shown up in the tv series Bones too.

Most of the big blockbusters tend to use all parts of the world these days, but it is nice to see some of the classic areas come up once in a while even if they are small parts.

I am going to take some time off of blogging for the next few weeks. See you then.
Posted by The Great Silence at 8:56 AM