Reflections on 2008 and Where Do We Go From Here?

As I write this entry it will be my 80th blog this year. A few minutes ago I did a quick check of what I was writing about in each month this year. What is funny to me is some of those things I did earlier this year seem like 2-3 years ago now to me. Part of that is the constant blogging and videos I have put up that make some of the older stuff this year seem so long ago.

I was going to write a bunch of stuff about the economy and how I could tell things were not looking so good earlier this year when I traveled. Gas was an issue, but the overall economy is what everyone is concerned about now. To make this short, in what I experienced this year, lots of things that used to be free are no longer free, and small fees have turned into bigger fees. After I came home earlier this year from a trip I got a call from an opinion poll asking me what I thought about state parks. In California funding has been cut, and the opinion poll guy wanted to know what I thought of the three possibilities for raising revenue for state parks. Keep in mind that I just encountered all sorts of new fees on a trip and back. Each of the three possibilities were areas that had recently been given tax hikes and now they were thinking of raising them even more. It was not the right time for him to be calling me on that. I ended up thinking that if this was the best they could come up with there are some serious problems coming.

Originally, I had about 3-4 long paragraphs written about the above issue, but I did not want to make this blog entry too long. These type of economic issues do affect this blog some since I can not just take off to anywhere I want all the time. I did a bunch of stuff in 2008, but I do not have any far away (longer than an hour drive) stuff I plan to do for a while. This is not an issue of having material to post pictures or videos of since I still have tons of stuff I can show.

I was going to say some stuff about youtube and how I regard my use of it in the future, but I think I will wait a few weeks before I do that. As of right now I am taking the next few weeks off and then I will get back to posting new pictures and videos. It was a busy year for this blog, but I do not have the intention of trying to outdo the amount of entries I did this year for 2009.

So, thanks for all the e-mails, the comments, and the views. Believe me, I have a lot I still need to get out over the next few months just based on what I did this last year.
Posted by The Great Silence at 10:52 AM

Email ThisBlogThis!Share to TwitterShare to FacebookShare to Pinterest
Labels: Reflecting on 2008 and Beyond 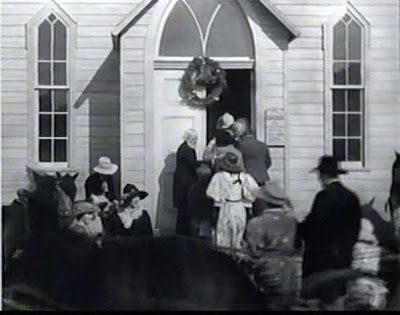 This was picture was shot at an angle, but shows how it looks now. 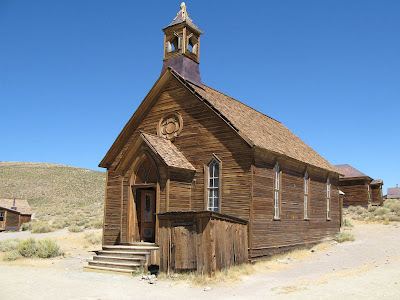 Here is the inside of the church in the movie. 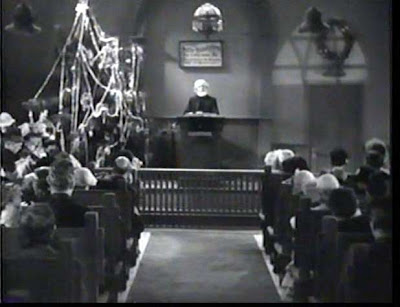 You can tell there are some things the same, but the pews were changed in the movie so they could have the outlaw with the baby walk right up the isle. 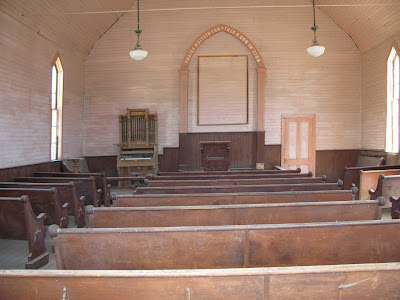 There was once a ten commandments sign posted up in front of the church above the pulpit. Someone stole it! It reminds me of the story of someone stealing the Encyclopedia of Ethics from the USC library, or the story I heard of aa guy stealing the criminology book from the school store for the class he was taking. Did they get something out of it?

This has been a long series, and to be honest, I am kind of glad it is over since it took up a lot of time this month. Merry Christmas, and please enjoy the holidays!

(EDIT: I have added new blog entries on Bodie for December, 2010. The relevant one is HERE. Also, you may want to watch my new video for this:

Posted by The Great Silence at 6:46 AM

Most of the town buildings were wiped out due to the fire. Although I knew they used the main street of the town I had hoped to find a few clues of where they were at. 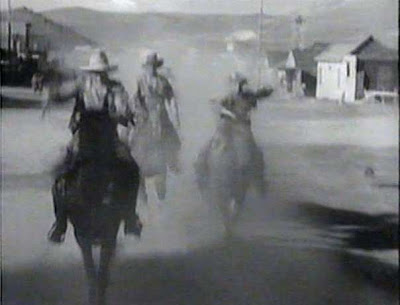 There is not much to go on here. The first thing I always look for is the features of the background. Those pretty much stay constant. In the following pictures the foothills in the background are the same as the above picture although the dark one on the left looks a lot closer to the town than my picture does. Someone once told me that hills and mountains all look the same. Nothing can be further from the truth. At first glance they might, but you have to develop an eye for them. There are little things you look for that make them distinct. 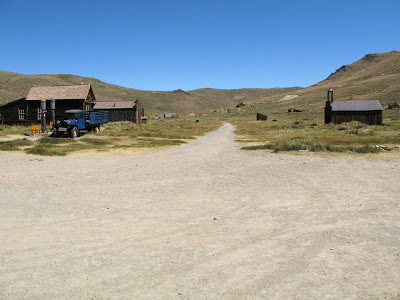 The other factor is the firehouse. You can see it a few times in the movie. The bell is the giveaway. You can barely see it in my picture above, but is clearly seen in the movie. It is sad, but that is all we have left there compare with. 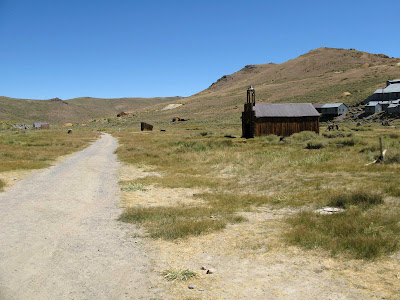 I looked at the buildings they pass by several times, but those are hard to identify. With further work I might be able to do it, but it is probably safe to assume most of what you see was destroyed in the fire. Also, note that grass has overgrown a good portion of the main street compared to what once was. Finally, did you see this undertaker carriage? 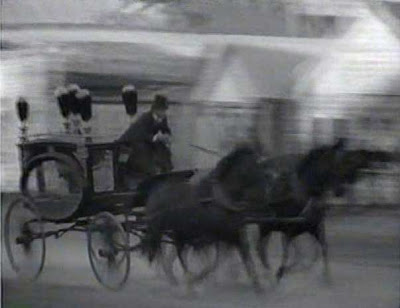 It is fun seeing that in the movie. It is in the museum they have in the town. 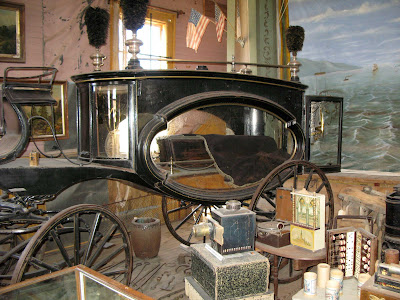 I do not have any gps coordinates for this area, but if you are ever there it is easy to find since it is to the easternmost part of the ghost town. I have not tried, but if I really had to I could probably get approximate coords just looking at some online maps.

The thing to remember is that the fire destroyed a lot of the buildings you will see in the movie. It also destroyed the bank they robbed. Although this area is clearly listed as the "bank" on the pamphlet they give you when you pay your fee to get in, there was a time where I was not certain they used the real bank.

Below I have a picture looking more to the west or southwest where most of the main town structures are. In the movie you can clearly see stuff like the big U.S. Hotel which would have been to the left of this picture. It burned down. If you look closely you maybe able to see the firehouse in middle of the picture. You do see it in the movie a few times. 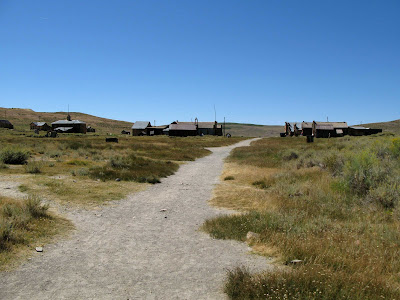 Here is our bank movie picture. It is the real bank the town had. 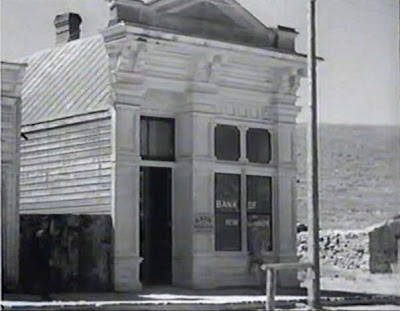 Originally, I was not sure about this. I had been to this bank site lots of times. After I saw the movie it still did not click with me. I thought they may have used another building in town because, after all, even back in 1930 a bank would want to reveal too much about itself to would be bank robbers. Since the bank burned down what was it that convinced me this is the right area? It is the Moyle Warehouse foundations to the right side of the picture. Refer to the above picture and compare. Without those it would be a lot harder to show the connection. 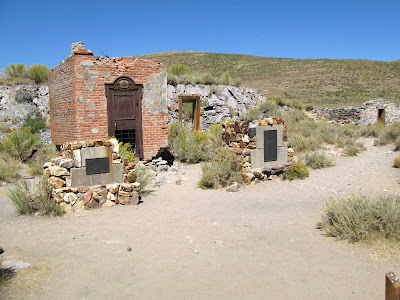 There is a chimney type of structure to compare, but even that did not look right. So, the warehouse foundations are the main thing I considered to show it is the same place because all that is left is the vault location. I do not believe they shot the interiors of the real bank in Hell's Heroes. The vault area does not look the same. (UPDATE: I have changed my mind on the interiors...sort of...refer to my blog entry coming in Dec. 2010) 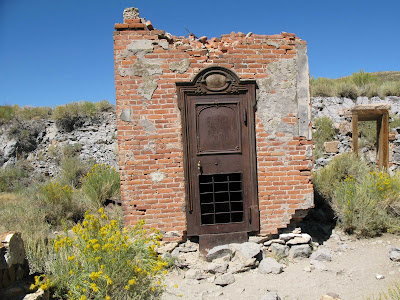 So, I headed to the gated door and looked inside. 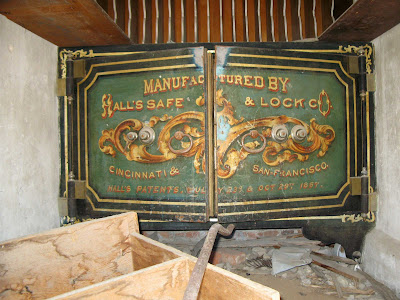 These are just to show you what the safe looks like inside of the vault. 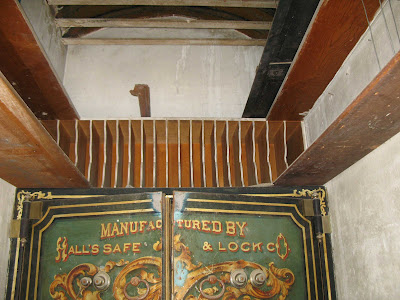 (EDIT: I have added a new blog entry on Bodie Bank HERE for my December, 2010 Bodie series. Also, I had added a new video:

(GPS: N38 12.485 W119 01.245)
This is the first of a few blogs I will do with the movie Hell's Heroes which was filmed at Bodie ghost town. I did a recent blog regarding the town of Bodie where I showed the gravesite of one of one of the citizens who was on the losing end of a gunfight. Hell's Heroes is based on the Three Godfathers story that has been filmed a bunch of times including the John Wayne and Harry Carey Jr. version filmed by John Ford.
The movie was made in 1930. It was in 1932 that a boy was playing with matches that burned down over 90% of the town. The story is he was given jello at a party, and he wanted ice cream. He was sent home only to set fire to his bed. Thus, earning the wraith of most "history preserving townspeople." Well, at least we have that 5% left.

It is very rare to have a a fictional movie filmed in a historic old west town, but what is more interesting is the historic preservation on video of what once was. What is good about this movie is it is like going into a time machine and for a few brief scenes seeing what the town was like prior to that fire two years later. Here is a picture from the movie which I put some sepia on the black and white picture. 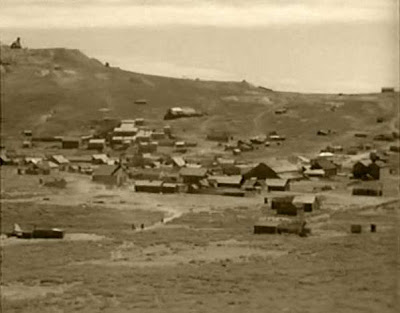 My picture is just above the cemetery near a barbed wire fence. To get a more closer shot to the above picture I would have had to move a few hundred feet to the left (or northwest) and possible higher. At the time I was content with this because I wanted to take more pictures and video in the town itself which is where the real cool stuff is. 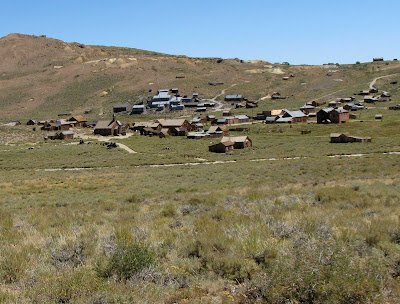 This is one of those areas I go to every few years since I live nearby during the summer. It is different now when I go in that there is always a lot more people now. I remember a time in the early 1980's I was with a bunch of relatives, and we were the only ones around. Back then there were areas you could go to there that you can not go these days.

Although I could probably rifle out a lot of facts and history about this place I will probably content myself into just focusing on the movie locations and some of the tidbits that go along with those. There is tons of stuff about this ghost town in print, on video, and online.

(EDIT: As of December 2010, I have added many new Bodie blog entries and three new videos. Please check my blogs found here for all the latest.)

Posted by The Great Silence at 3:10 PM