Out of the Past Locations (Index)

I decided to revive this "oldie" with a new video.

Out of the Past Locations (Vimeo Version)

I covered some of these areas in Bridgeport, CA with pictures before:

Out of the Past at Upper Twin Lake (Correction)

Originally, in those entries I decided not to post a picture of one of the historic houses since it is private property, BUT, you will see it in the new video...it is a historic house and there have been tons of pictures taken of it both old and modern. It is even on the cover of a book, so I just "gave in" on the video. However, if you go there be respectful and don't be an idiot. :) Basically, the movie begins and ends in Bridgeport. It has other locations as listed here.

Interesting enough, I had a sense of deja vu with regarding these locations in the past year. I have found out something new that I am not sure many have realized about the director filming this movie here. I will reveal that sometime in the future.

Posted by The Great Silence at 6:28 PM

Email ThisBlogThis!Share to TwitterShare to FacebookShare to Pinterest
Labels: Out of the Past Locations Index

This is one of those that had I been around during the time the theme park was up it would have been obvious. The first time I went to Corriganville I had this one in my mind, but since I was just trying to get the feel of the area I think I went by it without figuring it out. I then came home and made a few comparisons and knew where to go when I came back. It is slightly off the obvious trail that circles around the park. In the Fort Apache video I point out the direction you have to go down since it is right next to it.
The dug out cabin or hut has been used in lots of movies, but I will just use what was shown in Fort Apache. 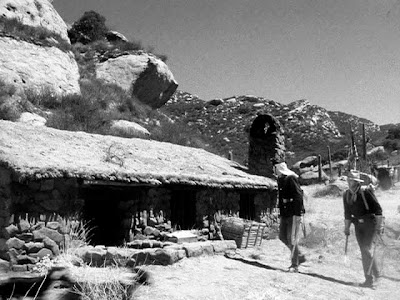 The huge rocks on the left were really my targets. As you can see there is a lot of overgrowth here. 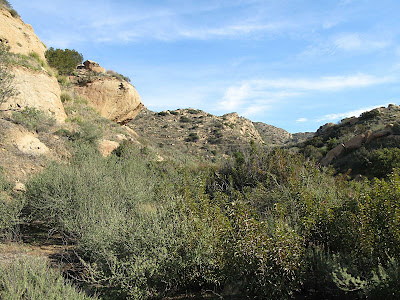 In the video I show a lot of what remains there. Whether that is actually from the cabin I do not know.
Posted by The Great Silence at 3:55 PM

Hemet Maze Rock (Vimeo Version)
I was always curious about this one. So, I traveled to seek it out. You park at the end of the road and walk about 1/4 of a mile to it. 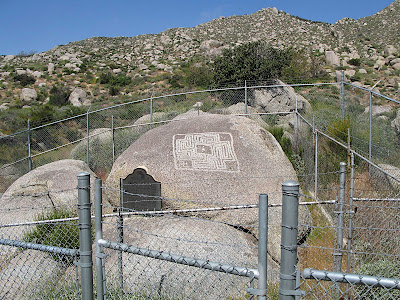 The pathetic thing is that it is gated with two fences. I had to stand on a rock and avoid falling to get these two pictures. It is a California Historical Landmark, but that is hard to read because of the fences. All I know is that it is a cool looking petroglyph in Hemet, CA. 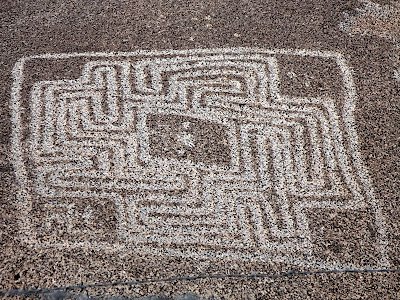 I am sure you can find more about it if you google it.
Posted by The Great Silence at 3:39 PM

The final stop in my day in Mammoth, CA last summer. Although I had never been here before, my father had taken many pictures here years ago that I had seen. I knew what to expect and what I was after.

The first thing one notices at the parking lot is all the dead trees around. Mammoth is a volcanic area and the high concentration of carbon dioxide started killing off the trees here about twenty years ago. 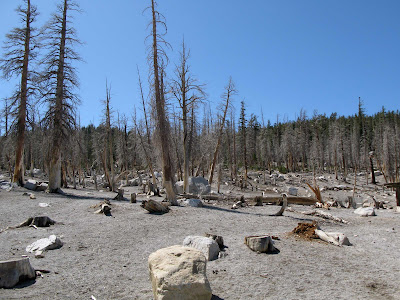 On to Horseshoe Lake, it is here that Mariette Hartley met up with Randolph Scott, Joel McCrea, and Ron Starr. 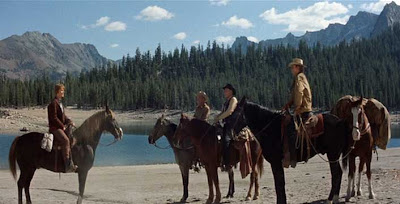 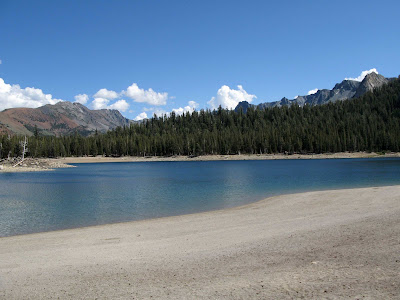 A close up of Randolph Scott and Joel McCrea: 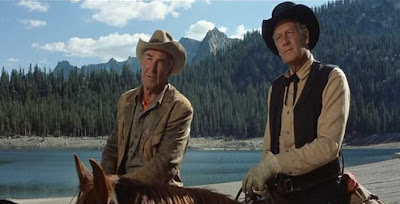 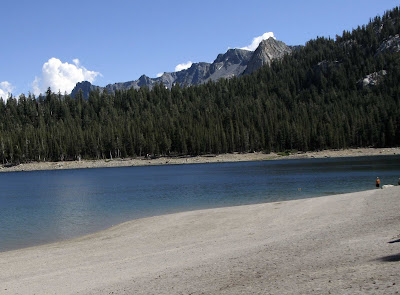 In the video I also show a scene from Gene Autry's Melody Ranch done here on this beach and a little more of the lake.

Some of Rose Marie (1954), a musical, was shot nearby too. I know someone uploaded that whole movie in different parts on youtube so you can do a search for that one if you care about that.

This ends everything I did in Mammoth on that day. There are other things I want to do there when I go back, but that will probably not be anytime soon. I already have some ideas as to what I want to explore next when I do go back there.

Let me say a little bit more about Ride the High Country. It is one of my favorite westerns. Originally, it was supposed to be the retirement movie for both Randolph Scott and Joel McCrea. For Scott it was, but McCrea did come out of retirement. More of this movie was supposed to be filmed in Mammoth, but they were there during October which one always runs the risk of encountering unexpected early heavy snow winter conditions. In the past, I have encountered this myself when everything was nice then all of a sudden a heavy snow storm came and I wondered if I would get snowed in a for a while. I have read they were there for only four days before they were forced to film elsewhere. That is why they ended up shooting the mining camp scenes in Bronson Canyon.

However, you can still tell they were in Mammoth during the shootout on the mountain side. It looks like they were just north of these last two locations I have shown because you can see some of the mountain features when they look south. I would have to watch the movie again, but I suspect I could probably find out where they were and there are probably trails that go by there. It is probably just off of Mammoth Mountain. If I am every in the mood I will go back and figure it out.

Originally at the end here when I wrote this I mentioned how the farm used in the movie, which is the location of the final gunfight, was a mystery to me. I asked for some help if anyone knew of where it was. I finally have followed up to this and reveal where the location is here:

Shootout at the Knudsen Farm
Posted by The Great Silence at 3:12 PM

(GPS: N37 36.675 W119 00.625)
After the crater, the postpile, and the falls, I was starting to lose my enthusiasm. This is the way things sometimes are when I plan things out way beforehand and by the end of the day I just want to go home. So, I had to really "push" myself to do this part, but I knew this would be rewarding.


This is Lake Mamie and the unqiue mountain formation in the background is Crystal Crag. 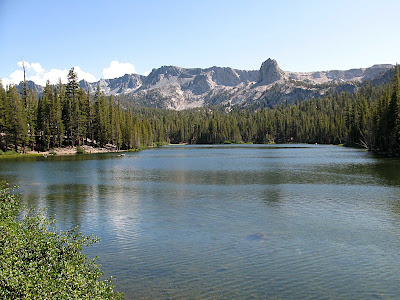 It has shown up in a lot of old b-westerns. It is the first thing you see in Ride the High Country.

My shot from a different angle. 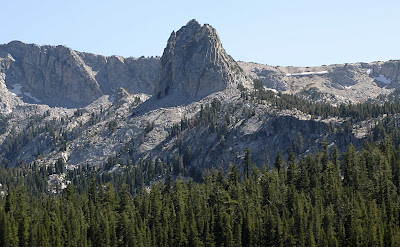 Just across the street is where they shot a short scene in Ride the High Country. They show you Twin Lakes below.

My picture looking below. 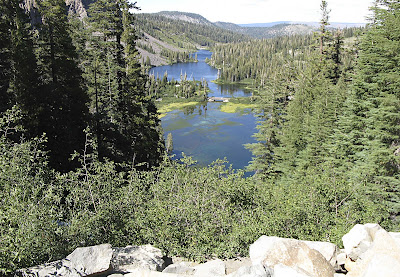 The camera was probably very close to where I was at, but then they look like they moved a little to the right (south) to show Randolph Scott and Joel McCrea coming up the mountain with their horses. When Randolph Scott comes up and you see the lakes again through the trees. 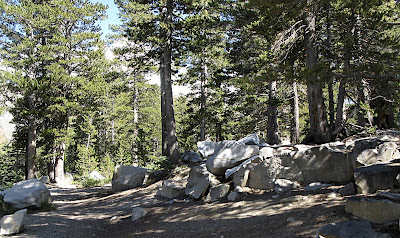 This is looking towards my right (south). More than likely they were over there somewhere then came up to the road. Right after they come up here it looks like they were on Lake Mary Road, but the cameraman shoots it at an angle so you do not see the road or Lake Mamie.

Alright, one more of these from Mammoth and I am done with this area.
Posted by The Great Silence at 10:04 AM