This will be my final post until next year (which means I might have another entry tomorrow). I wanted to just do a wrap up of the last few entries.

As I have said a few times, this is a unique find since no other movie has been filmed in these areas from what I can tell. This B-Western is rare and next to impossible to get right now. It would be nice for some company to release a better quality edition so I can get some more precise shots of the area.

The major outdoor scenes were done in two areas:

To see the entries:

I've warned all my friends and neigbors, "Better watch out for yourselves", they should never give a license to a man who drives a sleigh and plays with elves. Ugh...yeah...
Here is the finale to my little series on this area. 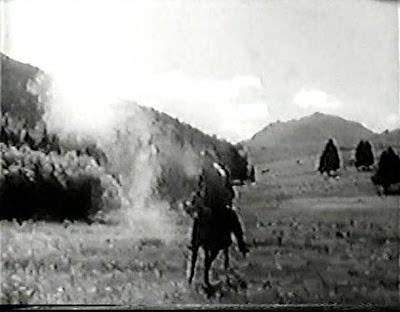 Notice the mountain in the background from the movie picture. 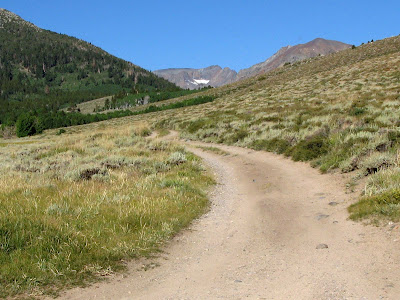 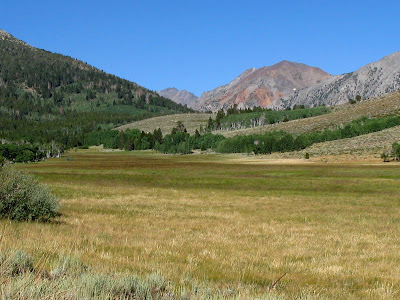 The chase scene heads in this direction to where the final shootout takes place. 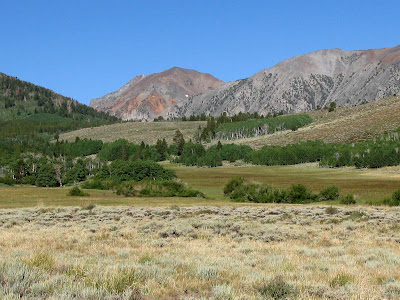 Well, thats it. I hope you enjoyed this series. This is a unique movie location and I do not think anything else was ever filmed here.

Have a Happy Christmas and New Year!

Now the goose is on the table and the pudding made of fig and the blue and silver candles that would just have matched the hair on grandma's wig. Ugh, yeah.

This next area is further north of Sinnamon Meadows where they shot the other locations. It is quite interesting for a bunch of reasons.

They shot this part of the movie off of Highway 108 which takes one over Sonora Pass. 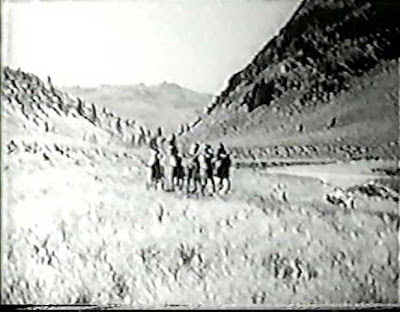 You can see Highway 108 on the left side of the picture. 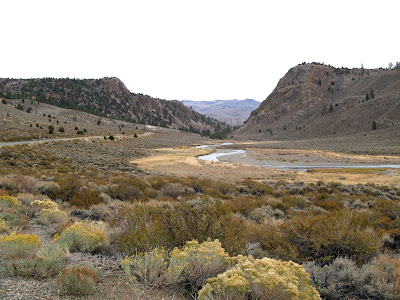 This is the Walker River they are crossing. 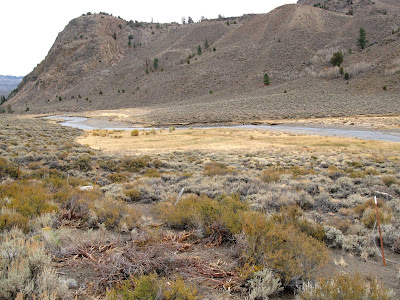 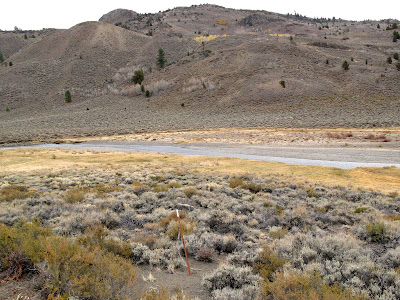 In the next movie picture if you were to go just over that hill in the background you would end up at Kirman Lake which was (and still maybe on a good day) a good place to catch brook trout. 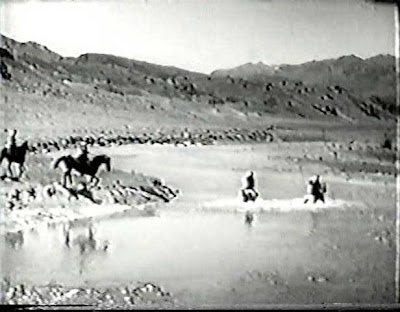 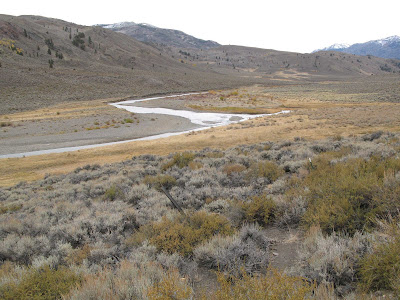 It turns out a bunch of helicopters were flying in the background of another picture I took. However, I decided not to post that. The reason for that is there is a marine base just up the road to the right. It happens to be the area they mountain train. It was used to train our soldiers for the war just after Sept. 11, 2001. There is an area they go to be able to scale mountains, etc. nearby. 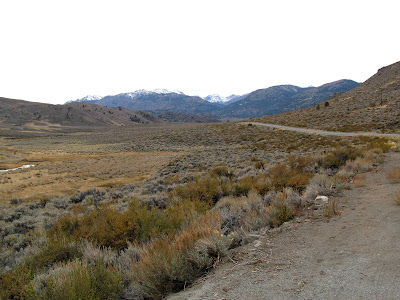 This will be concluded later with part 4 of this series.
Stay tuned...
Posted by The Great Silence at 4:43 AM

This is the second part. Sinnamon Meadows is one big place. A lot of scenes were just running back and forth in the same big area. This is more to the western side compared to the eastern one you saw in the last entry. 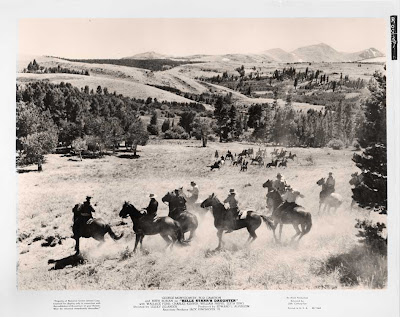 I actually own a publicity picture taken from the movie. That is the best picture I have from this movie. I got pretty close with the following pictures. Not exact, but pretty close. 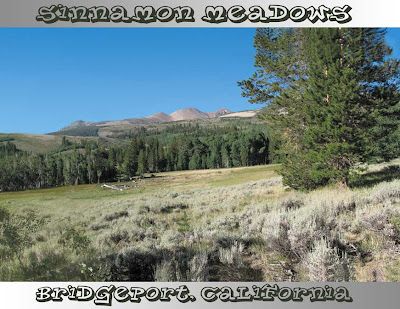 Please click the pictures to see the details at a bigger size. Finding the exact locations with something like this is hard because trees do not last as long as rocks do. BUT, you can see some of the features that have remained for the past sixty years. 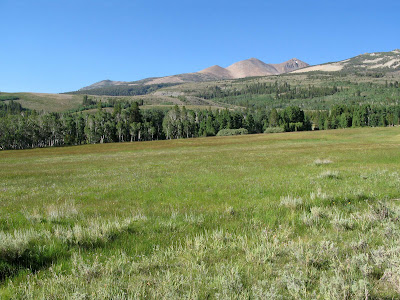 Part 3 will be coming tomorrow. Stay Tuned.
Posted by The Great Silence at 11:03 AM

Okay, the next few entries have nothing to do with Christmas. They are something I decided to hold on to and release about this time of the year. Usually, I do not claim my finds as being unique to me. Many of them have been found way before me.

This time I think I have found one that no one, at least online or anything I have read in location books, has found. Part of the reason for this is that this movie, Belle Starr's Daughter, is very difficult to find on video. I was fortunate to get a copy last year. I know the outdoor locations rather well. I know the quality isn't that great, but check it out: 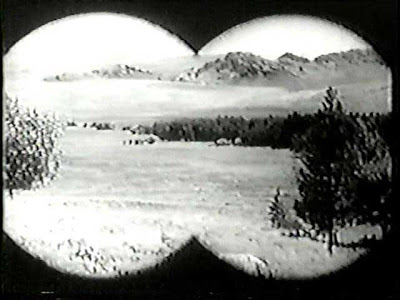 This area is known as Sinnamon Meadows. It is just outside the town of Bridgeport, CA. It is near the old mining area known as Dunderberg. This picture is looking east. Highway 395 is just beyond the rocky hills you see. 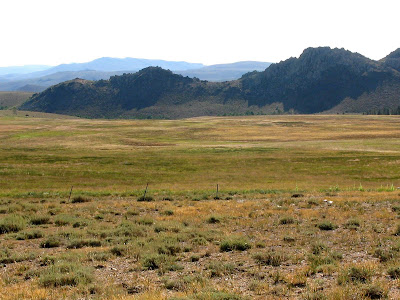 Although I did not see any, you can tell that cattle will graze here during the year. 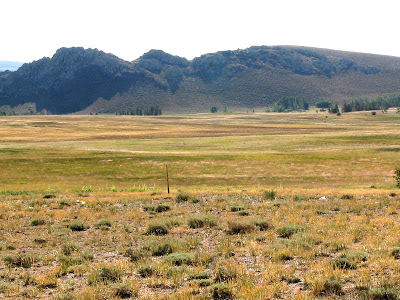 It actually took me about 30 minutes to walk close to the following picture. It is not as easy hike in this meadow because you feet tend to sink a bit on many steps. 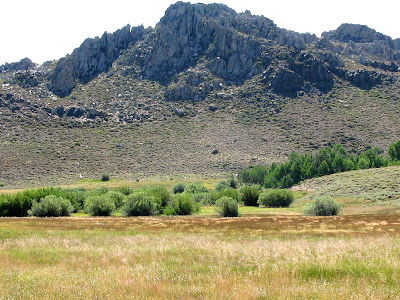 Tomorrow, I will follow up this up with Part 2.

Posted by The Great Silence at 8:38 PM